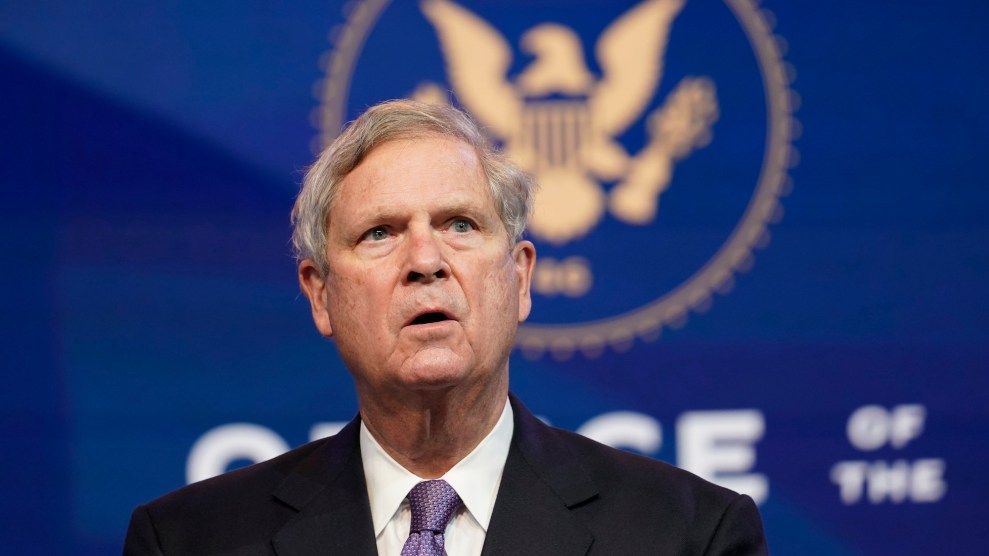 There’s an ambitious effort afoot in the European Union to push the continent’s agriculture in a healthier, more resilient direction, to reduce the use of toxic chemicals in farming and encourage people to eat less meat. Under former President Donald Trump, US officials often attacked this strategy, which was hardly surprising—the Trump administration openly aligned itself with the agrochemical industry, counting no fewer than three former Dow Chemical execs among its top agriculture department appointees.

Now that Trump’s policy team has been sent packing, you might think the Biden Administration would take a friendlier approach to a major ally and trading partner’s plan to recalibrate its food system. After all, unlike Trump, President Joe Biden takes climate change seriously.

But Biden’s agriculture secretary Tom Vilsack is holding the Trumpian line on Europe’s new plan, known as the Farm to Fork Strategy. Speaking at a recent agribusiness conference, Vilsack made clear in a statement that when it comes to farm policy, “the EU has chosen one way,” while the United States has chosen a very different path.

Vilsack’s disdain for the EU’s plan—which dates to last year, when he worked as a dairy industry executive—cannot arise from a sense of US superiority. Our diet-related public health troubles are deeper than Europe’s; and climate change and widespread water pollution are ravaging our two most important farming regions, California’s Central Valley and the Midwestern corn belt. So what is it about the plan that so repels Vilsack?

Farm to Fork requires a 20 percent drop in fertilizer use by 2030, and a 50 percent cut in pesticides.

The Farm to Fork program, part of the European Commission’s response to the continent’s own accelerating climate chaos and steady rise in illnesses related to highly processed food, aims to “make food systems fair, healthy and environmentally-friendly.” At its heart lies the goal of slashing farmers’ reliance on water-polluting, energy-intensive agrochemicals: It requires a 20 percent drop in fertilizer use by 2030, and a 50 percent cut in pesticides. The plan, which is part of the European Green Deal, also mandates a 50 percent reduction food waste; calls on farmers to halve their use of antibiotics for livestock, a key driver in the global crisis of antibiotic resistance in human medicine; and aims to nudge Europeans to adopt a “diet with less red and processed meat and with more fruits and vegetables.”

None of that sat well with Trump’s team. His agriculture secretary, Sonny Perdue, a former fertilizer dealer with persistent ties to big agribusiness, denounced Farm to Fork as “based more on ‘political science’ than demonstrated agricultural science.” The chief scientist of Perdue’s ag department, a longtime former Dow Chemical exec named Scott Hutchins, took to an academic journal to lament that the continent’s policymakers had “largely abandoned many forms of ‘high tech’ such as synthetic chemistry as a solution” to the problems of farming.

But you’d think that Vilsack, who also served as ag secretary under Obama, might take a friendlier approach—maybe take some policy inspiration from the plans, or express support. Instead, he’s ramping up his predecessor’s campaign against Farm to Fork. In mid-September, he used the occasion of a G20 summit in Florence, Italy, to promote an alternative strategy called the Coalition for Productivity Growth, in which other nations pledge not to follow the European path on farm policy, the US trade journal Farm Progress reported. At a September 20 address (video here) before the Agricultural Business Council of Kansas City—whose member list reads like a roster of giant transnational meatpacking, grain-trading, and agrochemical conglomerates—Vilsack delivered more details about his doings in Florence.

Vilsack told the assembled execs that “the EU has chosen one way, [while] we in the United States believe that a market-oriented, incentive-based, voluntary system is effective” at slashing carbon emissions in farming.

In partnership with the United Arab Emirates, he said, the United States is seeking out counterparts in other countries to form a “coalition of nations” to pledge their allegiance to a more industry-friendly approach to ag-related environmental policy, in explicit opposition to Europe’s mandated cuts in agrochemicals. “We have somewhere between 10 and 15 countries that have already made a commitment to be part of this effort,” he added, though he didn’t list them. (I have contacted the USDA press office to request a list of the participants.)

Tightly allied with the Trump family, the United Arab Emirates makes an odd partner in an effort to coordinate global ag policy. Situated in a desert, the country imports at least 80 percent of its food supply, meaning that its domestic farming sector is minimal. But the UAE does possess massive oil and natural gas reserves—and natural gas is the main feedstock for synthetic nitrogen fertilizer production, the lifeblood of industrial agriculture and the main water pollutant in the ag-intensive regions of the United States and Europe.

The UAE’s state-owned fossil fuel conglomerate has jumped headfirst into the fertilizer trade in an effort to diversify its profit streams.

The UAE’s state-owned fossil fuel conglomerate, the Abu Dhabi National Oil Company, has jumped headfirst into the fertilizer trade in an effort to diversify its profit streams away from reliance on selling oil and gas on the global commodity market. Fertiglobe, a fertilizer-production joint venture between Abu Dhabi National Oil and the Dutch firm ADNOC, plans to spin off in an initial public offering of shares as soon as October, Bloomberg reported on September 17.

Vilsack also mentioned that he’s actively courting industrial agriculture powerhouse Brazil, the world’s largest exporter of soybeans, beef, and chicken and a major producer of pork and corn. In his speech before the Agricultural Business Council of Kansas City, Vilsack reported having had a “very good, solid conversation with my counterpart in Brazil, where I think both of us understand and appreciate that we can’t let our European friends basically dominate this conversation and basically suggest that there’s a single way to get to this ultimate goal” of a more climate-friendly farming regime.

Brazil makes an even more improbable ally than the UAE in a global effort to prepare agriculture for climate change. The country counts as the globe’s third-largest user of pesticides after China and the United States. The same small set of agrochemical/seed giants that hold sway in the United States—the German behemoth Bayer, Chinese-owned Syngenta, and the US firm Corteva (the combined seed-pesticide assets of the now-merged chemical titans Dow and DuPont)—also dominate Brazil’s pesticide markets. Its two biggest meatpacking companies, JBS and Marfig, are also major players in the United States.

Since January 1, 2019, Brazil has been governed by the quasi-fascist Jair Bolsonaro, a staunch Trump ally with whom the former US president shares a prominent adviser, Steve Bannon. Bolsonaro’s policies have utterly savaged the Amazon rainforest, a crucial store of carbon and home to nearly 1 million indigenous people, opening it to cattle ranching and undermining decades of efforts to preserve it. A July 2021 Bloomberg investigation found that “Brazil’s government is engaged in an active campaign to open up the Amazon to privatization and development—first by turning a blind eye as public and protected lands are raided and cleared, and then by systematically pardoning the people responsible and granting them legal title to the stolen lands.”

Deemed the “muse of poison” by the environmental press for her long-time advocacy of agrochemical deregulation, Cristina presided over an unprecedented bonanza of pesticide approvals after taking office in 2019, green-lighting 262 of the chemicals in the seven months of that year alone, of which 82 were deemed “extremely toxic” by Brazil’s own National Health Surveillance Agency, according to a Human Rights Watch report. “Some of them are banned or restricted in the United States and Europe,” HRW added.

A year before that spasm of approvals, Human Rights Watch had already issued a scathing assessment of Brazil’s wild-west pesticide regime. “Of the 10 most widely used pesticides in Brazil in 2016, nine are considered highly hazardous pesticides by the NGO Pesticide Action Network International,” HRW found. “Of these 10, four are not authorized for use in Europe, indicating how hazardous several are considered by some standards.” In rural areas, “ordinary people going about their daily routines face toxic exposures from pesticide applications that frequently occur in immediate proximity to their homes, schools, and workplaces.”

Given the steamrolling of the Amazon and the pesticide free-for-all, Vilsack is essentially embracing the agriculture policies of what counts as a rogue state in climate- and broader environmental-policy terms. At a time when climate change can’t be ignored—with droughts, floods, and fires menacing our key farming regions—a Democratic agriculture secretary is ambling down the same pesticide-scented path trod by Trump.

Silvia Secchi, a natural resource economist at the University of Iowa, has been following the US-EU beef over the Farm to Fork since last year, and is the co-author of a paper pushing back on the Trump administration’s critique of the program. She’s not too happy about the Biden administration’s campaign against Farm to Fork, either—or the allies it has picked up in the effort. “It’s appalling that for all its purported concern about climate change, this administration has aligned with a government that has wrecked policies put in place to reduce deforestation in the Amazon,” she told me. “For us to go and ally with them on these issues really tells you that the Biden administration has not seriously considered the long-term implications of having an ex-[dairy] lobbyist like Vilsack in charge of the USDA.”