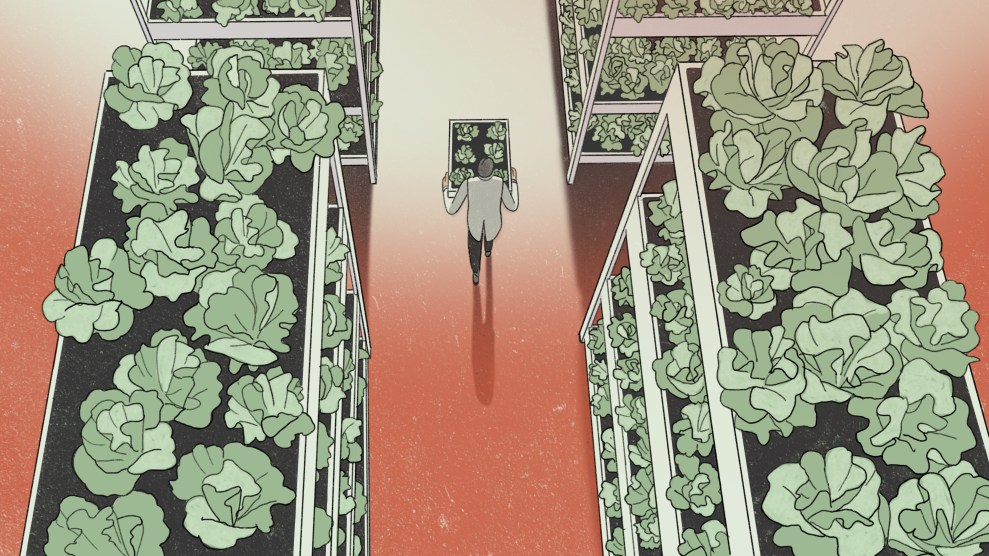 For growing food, the sun is yesterday’s technology. Soil? As quaint as an iPod. Such are the promises of vertical farms—indoor towers stacked high with crops. Waterborne nutrients feed the plants, and led lights drive their photosynthesis.

The idea emerged back in 2000, when Columbia University microbiologist Dickson Despommier wondered why Manhattan’s abandoned buildings couldn’t be used to grow food as efficiently as they once housed people. Free from the primitive sway of sunlight and dirt, “vertical farming can allow former cropland to go back to nature and reverse the plundering of the earth,” Ian Frazier wrote in a 2017 New Yorker article about Despommier.

As drought and heat waves plague the globe’s major vegetable-growing regions, the idea of farming indoors is gaining traction. AeroFarms, a New Jersey-based operation, says it uses 95 percent less water than traditional farming to grow salad greens. Plenty, a South San Francisco-based vertical-farming startup, claims to churn out “up to 350 times as much produce per square foot as a conventional farm, while using just 1 percent of the water.”

But here’s what the pitch decks probably don’t say: Vertical farming has a huge energy problem. Sunlight is free and renewable. Thus far, electricity is mostly neither. Just ask anyone who ever ran a grow house: Photosynthesis, the process by which plants transform light energy into calories, requires fossil fuels—unless your grow is powered by renewables, and most are not.

Virtually all vertical farming operations focus on lettuce and leafy greens. That’s in part because lettuce leaves are made up of 95 percent water, leaving relatively little heavy lifting for photosynthesis. Farming these greens indoors has obvious benefits: Most outdoor-grown lettuce comes from arid regions of California, which rely on irrigation from precious water pumped from stressed aquifers or diverted from rivers.

And by positioning themselves in or near cities, these startups brag they are cutting down on trucking emissions. If you live in New York, your wintertime salad greens likely come from 2,600 miles away in Arizona or California’s Imperial Valley. Bruce Bugbee, a professor of plant physiology at Utah State University, calculates that it takes about 5 kilojoules of energy to grow a gram of fresh lettuce and haul it in a refrigerated truck from California’s fields to Manhattan. Eliminating that expenditure, and the carbon emissions associated with it, seems like a win.

But Bugbee calculates that growing a gram of lettuce under electric light—assuming the most efficient LEDs on the market and maximum yields—requires 20 kilojoules of energy. In other words, even in the best-case scenario, it takes four times as much energy to grow lettuce indoors than it does to truck the crop across the country. Making matters worse, we still overwhelmingly rely on polluting coal and natural gas to give indoor operations their electric power. (Plenty, which purchases renewable energy where it can, says these calculations don’t take into account all of its operations’ energy efficiency.)

Other kinds of produce require even more energy. Take tomatoes. Like lettuce, they have high water content, but the fruit only accounts for half the plant’s biomass. The rest is stalks, stems, and leaves we throw out—all grown with electricity that is, in effect, wasted.

“We don’t view this as a zero-sum game,” says Matt Barnard, founder and CEO of Plenty. “We view this as adding another agriculture method to our portfolio.” He points out that more than half the country’s population lives east of the Mississippi River, while at least three-quarters of fresh produce is grown on the West Coast or imported. Bugbee and other critics counter that hybrid systems like winter greenhouses are more energy efficient than year-round vertical farms and can help increase food production in cold, densely populated regions.

But they are less alluring to tech-oriented investors. Companies like Plenty may succeed in squeezing enough efficiency out of their systems to profitably grow greens with artificial light on a large scale. “But just because something is profitable doesn’t mean it’s environmentally correct,” Bugbee says. “It means it’s economically correct.”