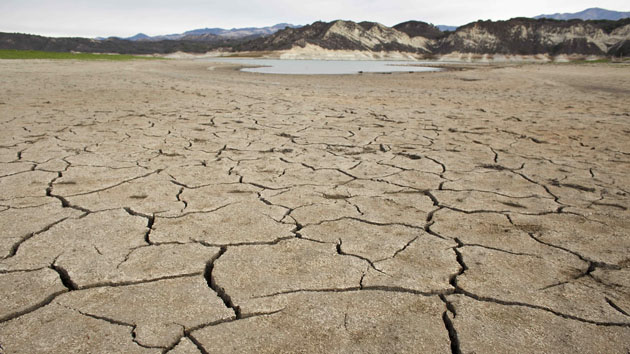 The Golden State is in the midst of a three-year drought—and scientists believe that this year may end up being the driest in the last half millennium, according to University of California-Berkeley professor B. Lynn Ingram. Californians are scared, with good reason: Fire danger in the state is high, and drinking-water supplies are low.

But the drought will have repercussions outside the state’s borders, as well. California produces a good chunk of the nation’s food: half of all our fruits and vegetables, along with a significant amount of dairy and wine.

So how will this historically dry period affect Californians—and the rest of us? Here are a few important facts to keep in mind:

How bad is it?According to the United States Drought Monitor, most of the state is experiencing “extreme drought,” the second highest of six rankings. About 10 percent of the state is experiencing “exceptional drought,” the highest possible level. As of this week, 17 communities are in danger of running out of water, forcing some to buy it or run pipes from other districts.

What do scientists say about the drought? Scientists can’t predict how wet or dry a specific season is going to be, but they can forecast drought trends over time, and they’ve been warning us for decades that the droughts will become more common. In 2005, Jacob Sewall, then a scientist at the University of California-Santa Cruz, used computer modeling to predict that over the next 30 to 50 years in North America, changing current patterns caused by melting sea ice would increase average annual precipitation by 40 percent in the Northwest while decreasing it by 30 percent in the Southwest. Sewall told Mother Jones last week that sea ice has been melting faster than predicted, which could speed up the precipitation changes.

With the recent rain, is it possible to make up the water we need this year? Even though some rain has finally come, it would be nearly impossible for California to make up the water it needs. According to the Department of Water Resources, the state would need to experience heavy rain or snowfall every other day from now until May in order to achieve average annual precipitation levels. Dr. Peter Gleick, codirector of the water-focused research nonprofit the Pacific Institute, explained that because California’s reservoirs are already depleted from a dry past two years, “We need a really, really wet rest of the season. And that’s statistically unlikely.”

Are Californians being asked to conserve water? Yes, some of them. So far, only a handful of cities have enacted mandatory water restrictions. Sacramento and Folsom are requiring residents to cut water use by at least 20 percent. Residents of Santa Cruz, Tuolumne County, and other municipalities and have been prohibited from watering their lawns and gardens during the day, refilling their pools, and hosing down their driveways. Santa Cruz has barred restaurants from serving water unless diners request it.

Most water agencies have opted for voluntary conservation measures, asking consumers to take shorter showers, flush toilets less regularly, and sweep driveways and sidewalks instead of hosing them down. When Gov. Jerry Brown announced in mid-January that the drought had reached a state of emergency, he urged Californians to reduce water consumption by 20 percent. It’s too soon to tell whether people are actually taking his advice, because so many of the restrictions went into place so recently. But Gleick says that in past droughts voluntary restrictions have been “somewhat effective,” depending on how seriously people take the drought.

Which crops are feeling the burn? Many farmers who grow annual crops—those that have to be replanted every year—have been able to plant fewer seeds than usual in order to conserve water. But those who tend crops that grow on trees and vines are in a tougher position, because their plants have to be maintained year-round.

The good news is that it usually takes more than one very dry season to actually kill a tree—but less water can mean lower production for at least a couple of years. In 2009, Ken Shackel, a tree crop expert at the University of California-Davis, observed several dozen unirrigated almond trees in dry soil for a year. The trees didn’t die, but their yield was cut in half. The next year was even worse: Despite receiving normal water, the trees’ yield was 90 percent below normal. It wasn’t until the year after that their yields were up to normal again.

“However bad this year, it will be worse next,” Shackel says of California’s tree farmers today. “Really bad this year means really, really bad next year.”

The most vulnerable crops, says Shackel, are probably stone fruits like plums, cherries, peaches, and apricots, which are adapted to wetter climates.

California’s ranchers are also feeling the drought. Less water means less grass for beef and dairy cows to graze, forcing ranchers either to cull their herds or sell cattle in fire sales. One auctioneer on the Central Coast told the Associated Press he was selling up to 1,000 cattle per week, up to 10 times the normal rate.

Will consumers see the effects of the drought in food prices? The cost of food is on the rise, but it’s hard to know whether this year’s drought is contributing to the hike. Bouts of extreme weather have pushed food prices up in the past, most recently after a major drought in China and floods in Australia. Ag watchers expect shortages and possibly price increases for lettuce, broccoli, and citrus, and melon over the rest of the year, although the citrus shortage is due to both the drought and the deep freeze in the rest of the country.

But what’s made this year particularly unusual, says Berlant, is that wildfires have been igniting “up and down the state.” Usually, the fire department only sees the occasional fire in Southern California. Since the beginning of the year, nearly 500 fires in the state have burned more than 1,100 acres—more than 10 times the usual burn total for January.

This month’s rain has helped quell the current fires, but because the land is so dry, Berlant says, “by the time we get into the summer months, the chances of seeing larger and more damaging fires is going to be much higher this year.”

Cal Fire is considering expanding inspections to check compliance with “defensible space” rules, which require that residents have 100 feet of space free of flammable materials (e.g. brush or other vegetation) around their houses.

What else is the drought screwing up? Hydroelectric energy, which makes up about 14 percent of the state’s power supply. With less water running through turbines, the grid may need to use more natural gas, which is more expensive. As a result, Californians’ power bills may increase slightly in the coming months.

So now what do we do? For starters, we should be taking the long view. In Gleick’s words: “We have a long history of panicking over droughts and then forgetting about them as soon as it rains. We really have to change our mindset.”

“Water resources aren’t about ‘What do we have this month?'” Sewell says. “They are about ‘What can we expect to have next year, 5 years from now, 10 years from now?’ The planning and infrastructure involved take a lot of lead time.”

During past droughts, coastal counties in central and Southern California have taken up portable desalination plants to get the water they needed. It’s an effective option, but the technology is expensive, and the plants require significant amounts of energy.

For individual Californians, Gleick suggests making changes that will make water conservation easier in the years to come. “There’s a distinction between voluntary behavior and permanent, long-term improvements in efficiency,” he says. “The first one is you let your lawn go brown. But the second one is that you replace that water-consuming lawn with drought-tolerant, native vegetation.”