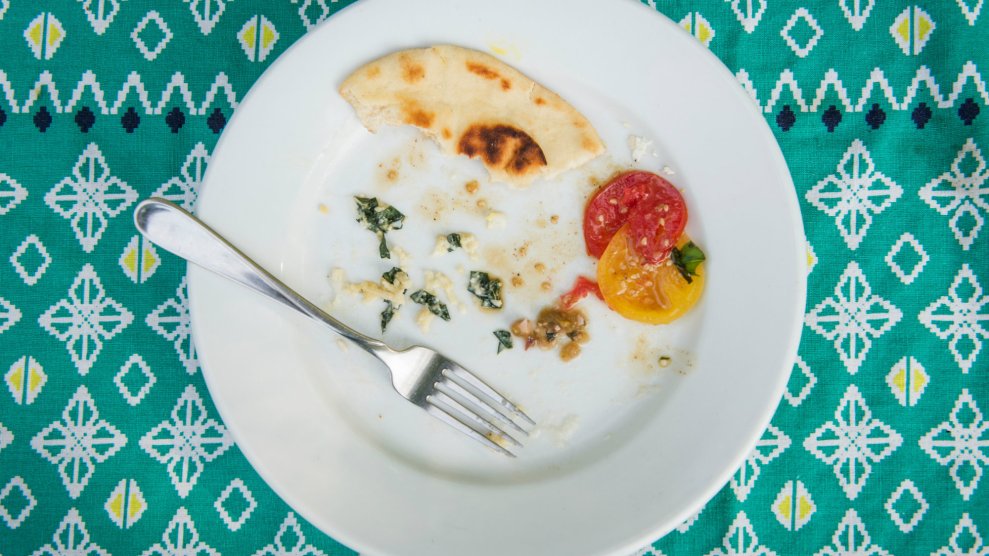 Before you toss that bruised apple or let your leftovers spoil in the fridge, you might want to digest this: New research finds that Americans waste nearly a pound of food per person every day. That’s roughly equal to 30 percent of the average American’s daily calories. And throwing our food into the trash wastes the land, labor, and resources that went into producing it.

Interestingly, new evidence suggests healthy eaters are creating the most food waste. A study published in the journal PLOS ONE on Wednesday found that people who eat higher quality diets—incorporating foods such as fruits and vegetables—also tend to throw more food away.  The authors, who looked at both food discarded at home and when people eat out, say its the first study to explore connections between diet quality, food waste, and environment impacts.

“Food waste is an issue for everyone,” Lisa Jahns, a coauthor on the paper, wrote in an email. “We all want the system to work well and to work for everyone’s benefit including the environment’s. Consumers sometimes don’t directly connect the dots about what happens with food waste because the consumer only see the immediate waste, not the larger costs that happen out of their sight.”

To understand what Americans consume, the researchers collected data on food intake and diet quality from the 2015 Healthy Eating Index, the US Department of Agriculture’s What We Eat in America database, and available food waste data. The data only includes self-reported food waste for individuals, not the amount of unused food that restaurants discard. Between 2007-2014, US consumers wasted nearly 150,000 tons of food per day, the study found.

Notably, of 22 food groups studied, the researchers found that much of what people threw away was foods that are generally considered to be key parts of healthy diets, rather than junk food. Fruits, vegetables, and mixed fruit and vegetable dishes (a salad or fruit cocktail, for example) accounted for more than a third of all food waste. Dairy followed at 17 percent, and meat and mixed meat dishes accounted for 14 percent of discarded food.

Jahns, a research nutritionist at the USDA’s Grand Forks Human Nutrition Research Center, cautions that the study found associations between high quality diets and food waste, not a cause and effect. “A healthy diet isn’t necessarily bad for the environment if consumers are sensitive to factors such as perishability when they shop and cook,” she says.

One limitation of the study is that the data on what people ate was self-reported, and people often underestimate how much food they eat and waste. But overall, the food-waste study helps fill gaps in knowledge, the authors wrote. “Food waste is a critical component of environmental sustainability that, until now, has not been rigorously analyzed alongside diet quality,” they concluded. “The current results suggest that simultaneous efforts to improve diet quality and reduce food waste may be critical.”
“Understanding food waste can help us better understand food consumption, and how we are utilizing the resources that we have,” says Drew Hanks, assistant professor of consumer sciences at Ohio State University. He was initially surprised to see healthy diets linked to more food waste, though after reading the paper, Hanks speculates that people eating high quality diets with more perishable foods might not be using up all the food before it spoils. The next step, he says,  is to “go deeper into those questions of ‘what’s driving that waste?’”
“Consumers have to balance many things when they make food choices,” says Meredith Niles, an assistant professor with the University of Vermont Food Systems Program and a coauthor of the new paper. “There’s a lot of constraints on time, and other factors.” While thinking about improving nutrition, researchers simultaneously need to think about food waste, says Niles.

“It really makes me look at my own dietary habits,” Jahns says, “and to be more conscientious of what’s down in the crisper at the bottom of the fridge.”