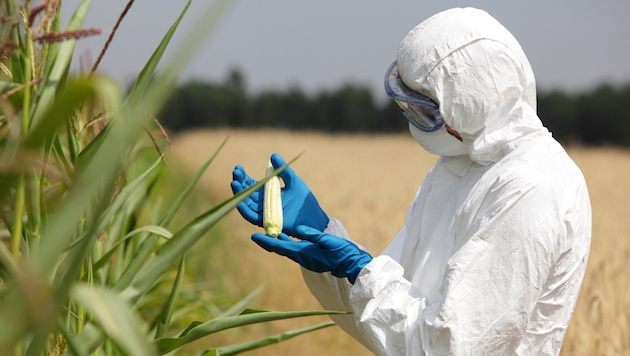 If only we had more pesticides. <a href="http://www.shutterstock.com/cat.mhtml?lang=en&language=en&ref_site=photo&search_source=search_form&version=llv1&anyorall=all&safesearch=1&use_local_boost=1&autocomplete_id=ifixfn35zfxafvyw1x&search_tracking_id=YHBEOq2fHBS5iytm9jav2w&searchterm=biotechnology&show_color_wheel=1&orient=&commercial_ok=&media_type=images&search_cat=&searchtermx=&photographer_name=&people_gender=&people_age=&people_ethnicity=&people_number=&color=&page=1&inline=148936832">Marcin Balcerzak </a>/Shutterstock

Pity Monsanto, the genetically modified seed and agrichemical giant. Its share price has plunged 25 percent since the spring. Market prices for corn and soybeans are in the dumps, meaning Monsanto’s main customers—farmers who specialize in those crops—have less money to spend on its pricey seeds and flagship herbicide (which recently got named a “probable carcinogen” by the World Health organization, spurring lawsuits).

Monsanto’s CEO hinted that the company may be too invested in high-tech seeds, and underinvested in old-fashioned pesticides.

In response to these unhappy trends, the company announced it was slashing 2,600 jobs, 12 percent of its workforce, and spending $3 billion to buy back shares. Share buybacks are a form of financial (as opposed to genetic) engineering—they magically boost a company’s earnings-per-share ratio (a metric closely watched by investors) simply by removing shares from the market. And buybacks divert money from things like R&D—or keeping a company’s workforce whole—and into the pockets of shareholders.

In a conference call with investors (transcript), Monsanto CEO Hugh Grant put a positive spin on the company’s prospects. “Our germplasm performance has never been better, our trait technology has continued to leap and our market position and pipeline remains strong,” he declared. But later, he hit upon a theme that became obvious when Monsanto was stalking Syngenta: that Monsanto’s leadership feels the company is too invested in high-tech seeds, and underinvested in old-fashioned pesticides. (The market for Syngenta owns the globe’s leading position.)

In the call, Jeff Zekauskas, an analyst with JP MorganChase, asked Grant whether Monsanto was still interested in boosting its pesticide portfolio by buying a competitor. Grant’s answer was essentially yes: “We still believe in the opportunity of integrated solutions,” i.e., selling more pesticides along with seeds. He added:

We’ve got a 400 million acre seed technology footprint. We’ve seen time and time again that we can increase revenue and improve grower service by bringing chemistry up on that footprint.

Translation: Our patented seeds and traits are sown on 400 million acres worldwide (about four times the size of California), and if we could sell more pesticides (chemistry) to the people who farm those acres, we could make more money. Later, he noted:

Translation: Research-and-development investments in the ag-biotech/agrichemical sector aren’t paying off—not enough blockbuster new products—so the few companies remaining in the field (there are six) are going to start swallowing each other up.

Massive layoffs, share buybacks, dreams of buying up the pesticide portfolios of competitors—these aren’t characteristics of a company confident in the long-term profitability of its core technology: the genetic modification of crops.