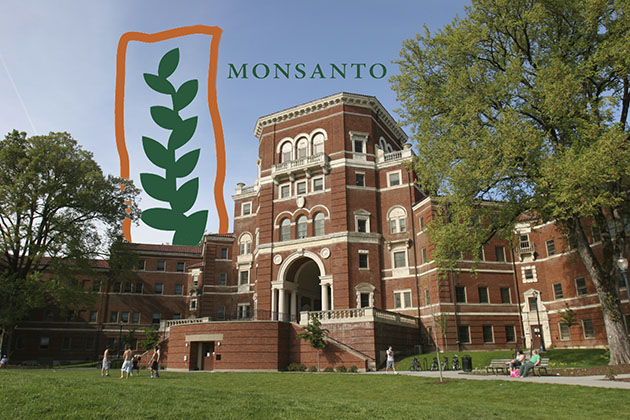 For a blockbuster recent piece, the New York Times’ Eric Lipton got a first look at a massive cache of private emails between prominent public university scientists and GMO industry executives and flacks. The emails came to light through a barrage of controversial Freedom of Information Act requests by U.S. Right to Know, which is funded by the scrappy, anti-corporate Organic Consumers Association.

In addition to the correspondence uncovered by USRTK, Lipton used the FOIA to uncover emails showing close ties between former Washington State University researcher Charles Benbrook and organic food companies like farmer-owned dairy company Organic Valley. Lipton paints a fascinating picture of the place occupied by public universities in the PR and lobbying war between the agrichemical/GM seed and organic food industries.

“I understand and appreciate that you need me to be completely transparent and I am keenly aware that your independence and reputations must be protected,” a Monsanto rep wrote to professors.

But his piece, excellent as it is, may actually underplay the extent to which Monsanto, other ag-biotech companies, and their trade groups and hired PR guns rely on friendly professors as foot soldiers in the industry’s battle against regulators and critics.

Here are some highlights that didn’t make it into the Times. Although there is no specific evidence to suggest that Monsanto paid professors for these activities, and many of the professors have said they reached their conclusions independently, the correspondence is nonetheless interesting:

• In an August 2013 email to nine prominent academics, Monsanto’s strategic engagement lead Eric Sachs broached a plan: that the group would pen “short policy briefs on important topics in the agricultural biotechnology arena,” chosen “because of their influence on public policy, GM crop regulation, and consumer acceptance.”

Sachs assured the professors that the project would be handled discreetly. “I understand and appreciate that you need me to be completely transparent and I am keenly aware that your independence and reputations must be protected,” he wrote. Two outside entities—an industry-funded group called the American Council on Science and Health and a PR outfit called CMA—would “manage the process of producing the policy briefs,” “coordinate website posting and promotion,” and “merchandize” the briefs by helping turn them into “op-eds, blog postings, speaking engagements, events, webinars, etc.” This third-party management is “an important element,” the Monsanto exec added, “because Monsanto wants the authors to communicate freely without involvement by Monsanto.”

In December of 2014, the zealously pro-biotech website Genetic Literacy Project ran a package of professor-penned articles that look remarkably like the ones proposed by Sachs, though no involvement with Monsanto is disclosed in any of them. For example, Calestous Juma, a professor at Harvard’s Kennedy School, was among the addressees on that August 2013 letter from Monsanto’s Sachs. In it, Sachs laid out seven topics and suggested each to one or two of his correspondents. Here’s what Sachs had in mind for Juma:

Entitled “Global Risks of Rejecting Agricultural Biotechnology,” Juma’s contribution—which Juma says is based on a book that he wrote in 2011—closely resembles Sachs’ request for a robust defense of GMOs as a bulwark against hunger in the developing world. (On Wednesday, The Boston Globe noted Juma’s piece, describing it as a “widely disseminated policy paper last year in support of genetically modified organisms,” written “at the behest of seed giant Monsanto, without disclosing his connection.”)

In his email, Sachs recommended that Peter Phillips, a policy professor at Canada’s University of Saskatchewan, write about “over burdensome regulation of GMO crops and food.” His piece on the Genetic Literacy Project website is called “Economic Consequences of Regulations of GM Crops.”

“I would appreciate your consideration of submitting a blog on the safety and health of biotech to Web MD, at all possible?” a Monsanto rep asked a professor.

For University of Florida professor Kevin Folta—a main focus of the New York Times article—Sachs envisioned a piece on “holding activists accountable” for their opposition to GMOs. In his GLP piece, Folta thundered against those who “wage aggressive campaigns against existing technologies that have demonstrated to be advantageous to the farmer, the environment, the consumer, and the poor locked in nutritional deficit.”

• Another prominent academic who emerges with strong industry ties is Nina Fedoroff, an emeritus professor of biology at Penn State, a professor of biosciences at King Abdullah University of Science and Technology in Saudi Arabia, and the former chief science and technology adviser to secretaries of state Condoleezza Rice and Hillary Clinton. The Times piece noted that University of Illinois professor emeritus Bruce Chassy led a “monthslong effort to persuade the Environmental Protection Agency to abandon its proposal to tighten the regulation of pesticides used on insect-resistant seeds.”

But it didn’t mention that Fedoroff evidently played a key role in the campaign, which, as the Times reported, culminated when Chassy “eventually set up a meeting at the E.P.A., with the help of an industry lobbyist, and the agency ultimately dropped the proposal.” Fedoroff, it turns out, attended that meeting, according to an October 17 email. According to Chassy’s email, the pivotal confab with the EPA was set up by Stanley Abramson, a prominent industry lobbyist, and Adrianne Massey, who serves as managing director of science and regulatory affairs at the Biotechnology Industry Organization (BIO), a trade group to which Monsanto and other ag-biotech firms belong.

Fedoroff’s role in the campaign to get the EPA to back off on GMO regulation wasn’t confined to that one “surprisingly productive” meeting. Chassy reports in an August 19, 2011, email to Massey that he has been “working with Nina,” for “a month and many revisions” on an op-ed that ran in the New York Times on August 2011. The piece, bylined solely by Fedoroff, complained that the EPA “wants to require even more data on genetically modified crops” and concluded that the “government needs to stop regulating genetic modifications for which there is no scientifically credible evidence of harm.”

• In a January 10, 2012 email, Karen Batra, communications director for the Biotechnology Industry Organization, asked Chassy for advice on how to respond to an article critical of GMOs published in The Atlantic. “For most of us communications folks, the science here is way over our heads, and an appropriate response would have some kind of scientific defense,” she wrote. “In other words, BIO just writing a letter saying ‘biotech foods are safe’ isn’t enough of a response here.”

“I’m excited to torpedo this stupidity,” a professor told a Monsanto PR rep who had asked him to weigh in on a controversy over textbooks critical of GMOs.

She added that a group called IFIC—presumably the industry-funded International Food Information Council Foundation—had “also [sent] out a mass email asking folks to weigh in on the [Atlantic article’s] comments page.” Batra asked the scientists to “either post a comment yourself on the page or provide us with some top-line scientific points that we could use in a letter to the editor.” Chassy responded to Batra’s email with detailed talking points on the article.

• Chassy “engaged on the Huffington Post blog at my request,” a 2012 email from Monsanto’s Sachs reveals—engaging in a spirited back-and-forth with an anti-GMO commentor, for which he sought input from Monsanto employees.

• At one point, Chassy agreed to Monsanto’s request to travel to China to speak at a seminar, without having any idea of the topic or the audience. Here’s Chassy on January 24, 2012:

You originally asked if I would go to China and do what I did in Korea. You wanted to know if I was available and said you would explain later. One thing led to another and I am now going but we never did speak about the actual mission on China. Where am I speaking?  To whom? For how long? More importantly, what is the topic and is there an assigned title? What’s really going on and what are the between the lines issues? Knowing the ansers [sic] to all of these questions would really help me plan a talk. Can we talk sometime before I start putting a talk together?

I apologize for the gaps in information. This opportunity came to my attention late in the process and I was narrowly focused on finding the best 3rd-party [i.e, non-Monsanto] expert that could speak on the topic of safety assessment of products employing RNAi [a topic I discuss here.]

“Monsanto China is working with Chinese Agricultural Biotech Association to host the seminar,” Sachs continues. “The goal is to pave the way for import approval for biotech products in China.”

Chassy later submitted a draft of his presentation to Monsanto officials ahead of the event. (See the exchange here). “Overall, everyone is pleased with how the presentation turned out,” a Monsanto employee responded, adding that there “were some minor changes in text and they are indicated in red,” as well as “some comments for you to address.” Chassy responded seeking more input:

Thanks to the reviewers. They picked up a number of good points. I have attached a word file which contains responses to the reviewers comments. There are a couple that remain unresolved or for which my new wording may or may not fully address the concern voiced by the reviewer. Please have each of the reviewers take a second look.

• In a January 15, 2015, email to the University of Florida’s Kevin Folta, Monsanto’s Lisa Drake wrote that “over the past six months, we have worked hard through third parties”—ie, people not affiliated with Monsanto—to “insert fresh and current” material on GMOs to WebMD. The pitch: “I would appreciate your consideration of submitting a blog on the safety and health of biotech to Web MD, at all possible?” She added, “Please consider insert [sic] the word ‘labeling’ somewhere in the content in order to get search algorithms to pick it up.” Folta responded, “I’m glad to do this and will bounce something off you soon.” (Folta says he never ended up writing the post in question.)

• And on January 28, 2015, an employee of the PR firm Ketchum—writing “on behalf of the Council for Biotech Information,” a group funded by Monsanto and other biotech companies—included Folta on a group email pointing to another burning controversy: A publisher had indicated it “will update a sixth-grade science textbook that presents some of the benefits of GM crops.” Worse, “additional publishing companies are considering replacing content that could be considered pro-GMO.”

She asked anyone interested in responding to the textbook crisis to reply. “I’m excited to torpedo this stupidity,” Folta responded, to the delight of his Ketchum correspondent. “This is the best email I’ve gotten all day. [Smiley-face emoticon.] Thanks! I’ll be in touch as we move forward on this.”