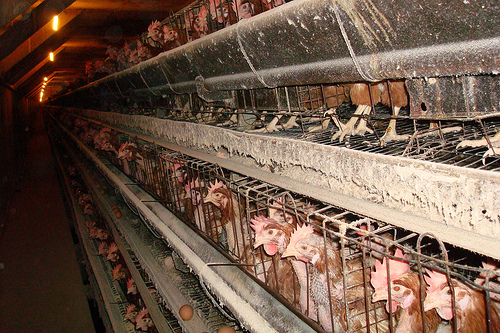 What’s it like inside a factory farm? If the livestock and meat industries have their way, what little view we have inside the walls of these animal-reviewing facilities may soon be obscured. For the second year in a row, the industry is backing bills in various statehouses that would criminalize undercover investigations of livestock farms. The Humane Society of the US, one of the animal-welfare groups most adept at conducting such hidden-camera operations, counts active “ag gag” bills in no fewer than nine states. Many of them are based on a model conjured by the American Legislative Exchange Council (ALEC),  a corporate-funded group that generates industry-friendly legislation language for state legislatures, Associated Press reports.

To understand the stakes of this battle, consider this 2010 Food and Drug Administration report on conditions in several vast egg-producing facilities in Iowa owned by a man named Jack Decoster. I teased out some highlights at the time of its release; in short, it involves flies, maggots, rats, wild birds, tainted feed, workers ignoring sanitary rules, and lots and lots of chickenshit. The report portrays the facilities as a kind of fecal nightmare, with manure mounding up in eight-foot piles—providing perches for escaped hens to peck feed from teeming cages—overflowing in pits, and seeping through concrete foundations.

It was, in short, a blunt and damning portrayal, an example of a federal watchdog agency training the public gaze on the misdeeds of a powerful industry. The investigation led the FDA to ban the offending operations from selling fresh eggs for several months.

USDA inspectors repeatedly witnessed dead bugs on the packing floor and old egg residues on conveyor belts just before the outbreak, but did nothing to stop production.

Trouble is, the FDA’s exposé came after those factory-like operations had been forced to recall nearly half a billion eggs potentially tainted with salmonella, and an outbreak that sickened nearly 2,000 people. It later turned out that the company’s own tests had detected salmonella in the facilities, including egg-carrying conveyor belts, no fewer than 73 times in the two years before the outbreak; and that inspectors from the US Agriculture Department had repeatedly witnessed unsanitary conditions like dead bugs on the packing floor and old egg residues on conveyor belts just before the outbreak, but did nothing to stop production, because they were only there to “grade” the size of eggs, not monitor the potential for disease outbreaks (which falls to the FDA).

Given that the egg company itself (which turned out to be part of the nation’s largest egg empire at the time) and federal watchdogs both failed to prevent the outbreak despite so many troubling signs, you have to wonder what would have happened if an animal-welfare group like Mercy For Animals or the Humane Society of the US had managed to sneak in cameras and record conditions before those half-billion suspect eggs made it onto supermarket shelves.

In fact, months before the outbreak, HSUS did get operatives to pose as a worker at several giant egg factories in Iowa, operated by Decoster rivals Rose Acre Farms and Rembrandt Enterprises. Here‘s some of what they found:

• Trapped birds unable to reach food and water: Battery cages can trap hens by their wings, necks, legs, and feet in the wire, causing other birds to trample the weakened animals, usually resulting in a slow, painful death.
• High mortality in layer and pullet sheds: The HSUS investigator pulled dead young hens, some of them mummified (meaning they’d been rotting in the cages for weeks), from cages every day.
Failure to maintain manure pits: According to one worker, the manure pit under a pullet shed had not been cleaned in two years. Rose Acre workers claimed that some hens are blinded because of excessive ammonia levels.
• Abandoned hens: Some hens manage to escape from their cages and fall into the manure pits below.

The exposure prompted Rose Acre Farms to undergo “third-party audit” of the facilities in question, while Rembrandt publicly declared it would investigate its facilities, adding to a farm trade journal that “it would have been beneficial had the Humane Society come directly to us right after the alleged violations occurred.” We’ll never know if the HSUS investigation caused changes that saved consumers from exposure to salmonella or other pathogens.

Federal watchdogs like USDA and FDA are having to cut back on inspections of meat-production facilities, meaning that already-weak oversight will only get weaker.

And in 2011, a Mercy For Animals employee got inside yet another Iowa egg company called Sparboe Farms and released a video depicting dead birds being left to rot in tight cages also occupied by live birds and flies, among other sordid scenes. In a web posting after the release, the company’s president wrote that the video had documented acts are “totally unacceptable and completely at odds with our values as egg farmers,” adding that the employees responsible had been fired. Just before the MFA release, FDA came out with the results of its own investigation of the facility, which found several violations—again potentially saving the public from a pathogen outbreak.

Last year, of course, Iowa and its famously agribiz-aligned governor, Terry Branstad, passed the nation’s first ag-gag law—meaning that any undercover investigator who exposes such abuses on one of the state’s hundreds of factory-scale hog and egg facilities will now be subject to criminal prosecution. The triumph in Iowa marks a significant victory in Big Ag’s push to keep its practices behind closed doors, because Iowa is the nation’s number-one state in both hog and egg-laying hen production.

In a time of fiscal austerity, federal watchdogs like USDA and FDA are having to cut back on inspections of meat-production facilities, meaning that already-weak oversight will only get weaker. If the meat industry wins these ag-gag battles playing out in farm states nationwide, who will serve as the public’s eyes on the factory farm floor? Answer: essentially, no one.