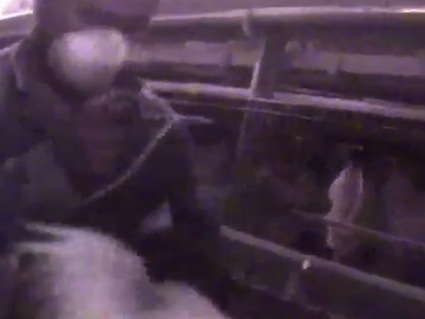 On Friday, Iowa governor Terry Branstad signed a bill that will make it much more difficult for animal welfare advocates to sneak cameras into Iowa’s factory livestock farms. The bill’s fate is being watched nationwide, because Iowa’s factory farms grow more hogs and keep more egg-laying hens than those of any other state.

The news got me to thinking of my own attempt, years ago, to peer inside an animal factory.

I was on a tour of a rural Iowa county, given by some farmers who were angry that massive hog-raising facilities had been plunked down in their community (I wrote about it here). At one point, we got out of the van so I could gape at two rows of such low-slung buildings, each holding thousands of hogs. A vast manure cesspool separated the two rows.

Even more repellent than the smell—which nearly dropped me to my knees—was the large man who came barreling out of one facility to demand to know what we were up to. When we informed him that we were citizens standing on a public road, he reminded us that just beyond that road lay private property, and we’d be well advised not to set foot on it. I asked him if I could have a look inside one of the buildings. He shot me a glare and turned on his heel, barking into his cell phone as he returned to his lair. I took the response as a “no,” and we moved on.

The scene neatly encapsulated the terms of factory meat farming. The industry insists on its right to impose its excesses on society—the unspeakable buildup of toxic manure, which pollutes air and streams—but refuses to let society look at what’s going on behind the walls. We are forced to smell, in other words, but refused the right to see.

For several years now, animal welfare groups like the Humane Society of the US and Mercy for Animals have pursued a kind of guerrilla watchdog strategy for combating this state of affairs. They plant undercover agents to seek jobs at the facilities, and when they’re hired, the agents eventually sneak in cameras and document the scene. As regulatory agencies like the USDA, EPA, and FDA have shown little appetite to inform the public about factory farm practices—much less rein them in—these groups have become our shadow regulators, our eyes on the factory farm floor.

And their work has done considerable good. Last year a Mercy for Animals employee got inside an Iowa egg company called Sparboe Farms and released this video in November. The video depicted such scenes as dead birds left to rot in the same tight cages as active layers, amid buzzing flies. In response, McDonald’s, then Sparboe’s largest customer, and Target ended their relationship with the company; and the FDA, which is supposed to monitor the food-safety conditions of egg farming, was moved to conduct an investigation of the facility that found several violations.

Likewise, the Humane Society captured on tape, at a facility owned by hog giant Smithfield, the industry-standard practice of confining pregnant hogs in tiny “gestation crates.”  The exposure no doubt helped inspire the company to vow to ban the practice by 2017.

But overall, rather than striving to become more transparent, the industry is responding to these undercover video incursions by trying to criminalize them. The bill just signed by Gov. Branstad is the latest in a line of “ag gag” proposals that began bouncing around state legislatures last year.

Most of the earlier ones would have banned the sneaking of cameras onto factory farms. The current Iowa bill, by contrast, will make it a misdemeanor to lie on a job application to gain access to a farm facility, punishable by a fine of up to $1,500 and a year in prison, AP reports. Repeat offenders will be charged with an aggravated misdemeanor and face a fine of up to $5,000 and two years on ice.

The bill passed both chambers of Iowa’s legislature, winning overwhelming support among Democrats and Republicans alike. There’s no puzzle as to why—the agribiz industry wields massive power in Iowa. Gov. Branstad is a case in point. The AP article mentions his “strong ties to Iowa’s agricultural industry, which has supported the measure.” I did a little digging into the nature of those ties, and quickly found some. The governor’s 2010 election campaign received more than $40,000 from the agribusiness lobbying group the Iowa Farm Bureau Federation. And the Iowa-based blog Bleeding Heartland has a well-documented post on how the governor recently stacked the state’s Environmental Protection Commission with four prominent agribusiness advocates.

The most interesting one of the four is Brent Rastetter, who runs a company called Quality Ag Inc., which makes large-scale hog confinements. Branstad’s appointment of a hog-industry exec to the environmental board has touched off conflict-of-interest complaints. According to Iowa campaign filings, Brent Rastetter donated more than $30,000 to Gov. Branstad’s 2010 election campaign.

Brent’s brother Bruce Rastetter, a former ethanol baron who now runs a confined-livestock business, gave at least $140,000 to Branstad’s campaign. The governor set off yet another controversy by appointing Bruce Rastetter to the Iowa university system’s powerful board of regents.

Given such a willingness to empower agribiz titans who also happen to be major donors, it’s no wonder that Branstad signed a bill that will protect their interests while trampling on the public’s.