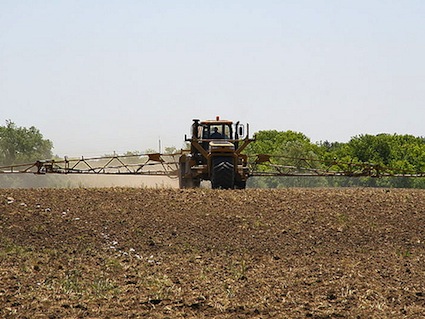 In a recent Nation piece, the wonderful Elizabeth Royte teased out the direct links between hydraulic fracturing, or fracking, and the food supply. In short, extracting natural gas from rock formations by bombarding them with chemical-spiked fluid leaves behind fouled water—and that fouled water can make it into the crops and animals we eat.

The potential for the growth of fracked nitrogen (known as “N”) fertilizer is immense. During the 2000s, when conventional US natural gas sources were drying up and prices were spiking, the US fertilizer industry largely went offshore, moving operations to places like Trinidad and Tobago, where conventional natural gas was still relatively plentiful. (I told that story in a 2010 Grist piece.) This chart from a 2009 USDA doc illustrates how rapidly the US shifted away from domestically produced nitrogen in the 2000s. 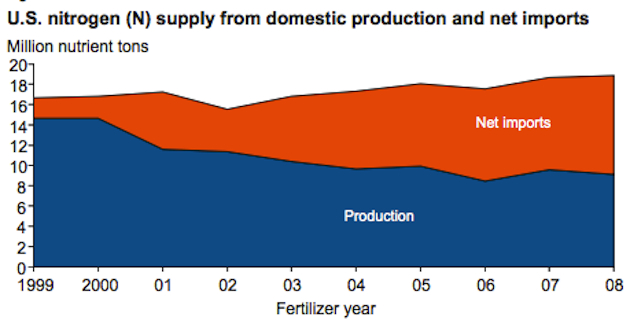 It was the N of the era: In the 2000s, nitrogen production moved offshore as US natural gas prices rose. Source: USDA

Today, Trinidad and Tobago, an island nation off the coast of Venezuela and our leading source of imported N, is in the same position the US found itself in the early 2000s: Its supply of conventional, easy-to-harvest natural gas is wearing thin. In 2012, the International Monetary Fund estimated (PDF) that at current rates of extraction, the nation had sufficient natural gas reserves to last until just 2019.

Meanwhile, the fracking boom has made US natural gas suddenly abundant—and driven prices into the ground. A Btu of US natural gas now now costs 75 percent less than it did in 2008, the New York Times recently reported. Meanwhile, nitrogen fertilizer prices remain stubbornly high, propped up by strong demand driven by high crop prices. Those conditions—low input prices plus elevated prices for the final product—mean a potential profit bonanza for companies that use cheap US natural gas to make pricy N fertilizer for the booming US market.

Not surprisingly, as Kay McDonald of the excellent blog Big Picture Agriculture shows, the industry is starting to move back to the United States to take advantage of the fracking boom. McDonald points to a $1.4 billion project announced in September by the Egyptian company Orascom Construction Industries to build a large new nitrogen fertilizer plant in Iowa close to a natural gas pipeline. According to the Wall Street Journal, “cheap U.S. natural-gas supplies and the nation’s role as the world’s most important food exporter” drew the Egyptian giant into the US market.

Fertilizer giant CF Industries won more than $70 million in tax incentives from the the state, and $161 million in property taxes over 20 years from the county that houses the plant.

That same month, US-owned agribusiness cooperative CHS announced it was investing $1.2 billion to build a nitrogen plant in North Dakota. An Associated Press article gave a taste of the potential profits in such an operation: “Natural gas prices are now at about $2.50 per thousand cubic feet. At those prices, it takes about $82 worth of natural gas to make a ton of anhydrous ammonia, which is selling for about $800 per ton.”

And then there’s US fertilizer giant CF Industries, which in November announced a $3.8 billion expansion of existing nitrogen fertilizer plants in Louisiana and Iowa, a move designed to “take advantage of low natural gas costs and high grain prices,” MarketWatch reported.

Now, it should be noted that it isn’t just the promise of windfall profits that are driving these investments. Energy prices are highly volatile, and the industry is wary of the risk involved with plunking down billions in hopes of future gain. Enter the taxpayer: These projects are being underwritten by public money at the national, state, and local levels. As a reward for expanding its Iowa plant, CF Industries won more than $70 million in tax incentives from the the state, and $161 million in property taxes over 20 years from Woodbury County, which houses the plant, the Sioux City Journal reports. Louisiana will chip in several million dollars in tax breaks for the company’s expansion there, too.

As for Orascom Construction’s Iowa plant, it’s being financed through a federal loan program designed to help states recover economically from disasters—in this case, Iowa’s 2008 floods. The loan program, which gives Orascom access to an interest rate much lower than it would find in the commercial market, is a de facto subsidy—it will likely save the company $360 million in interest payments on the construction, the Des Moines Register reported. And that’s on top of $100 million in tax breaks the state of Iowa has committed to the project.

What are taxpayers getting in exchange for these goodies? In my view, not much. Industrial agriculture’s reliance on plentiful synthetic nitrogen brings with it a whole bevy of environmental liabilities: excess nitrogen that seeps into streams and eventually into the Mississippi River, feeding a massive annual algae bloom that blots out sea life; emissions of nitrous oxide, a greenhouse gas 300 times more potent than carbon; and the destruction of organic matter in soil.

By adding a “small grain” (oats or wheat) plus nitrogen-fixing cover crops, farmers can reduce their nitrogen needs by upwards of 80 percent.

Rather than prop up nitrogen use by subsidizing new megaprojects, public policy could be seeking encouraging farming practices that demand less nitrogen. One obvious strategy is diversification. The most prolific US crop, corn, is also the most nitrogen-intensive among major field crops. In a 2012 paper, researchers from Iowa State University’s Leopold Center showed that by extending the typical Midwestern corn-soy crop rotation by adding a “small grain” (e.g., oats or wheat) plus nitrogen-fixing cover crops, farmers can reduce their nitrogen needs by upwards of 80 percent. Investing in policies that encourage such changes would likely, in the long run, be much smarter than subsidizing the fertilizer industry’s move toward relying on fracked gas.

As they fight the expansion of fracking and push for tighter regulations on it, concerned citizens can count on an opponent nearly as powerful and monied as Big Oil: Big Ag. Already, the American Farm Bureau Federation, which essentially acts as a lobbyist for Big Ag firms, supports the controversial energy source: “Farm Bureau supports additional access for exploration and production of oil and natural gas, including the use of hydraulic fracturing,” the group declared in an October 2012 policy statement (PDF). But the Farm Bureau and its agribiz allies haven’t played much of a role in the fight over regulating fracking, yet. As the fertilizer industry becomes reliant on cheap US natural gas, that will likely change.