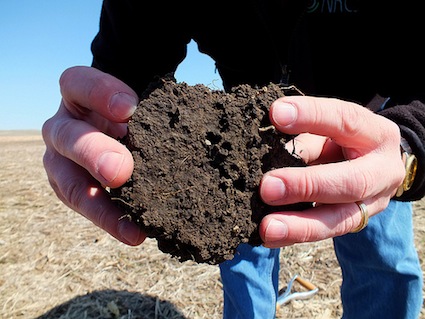 You’ve heard of peak oil—the idea that the globe’s easy-to-get-to petroleum reserves are largely cashed, and most of what’s left is the hard stuff, buried in deep-sea deposits or tar sands. But what about peak phosphorus and potassium? These elements form two-thirds of the holy agricultural triumvirate of nitrogen, phosphorus, and potassium (also known as NPK, from their respective markers in the periodic table). These nutrients, which are essential for plants to grow, are extracted from soil every time we harvest crops, and have to be replaced if farmland is to remain productive.

For most of agricultural history, successful farming has been about figuring out how to recycle these elements (although no one had identified them until the 19th century). That meant returning food waste, animal waste, and in some cases, human waste to the soil. Early in the 20th century, we learned to mass produce N, P, and K—giving rise to the modern concept of fertilizer, and what’s now known as industrial agriculture.

The N in NPK, nitrogen, can literally be synthesized from thin air, through a process developed in the early 20th century by the German chemist Fritz Haber. Our reliance on synthetic nitrogen fertilizer (as its known) carries its own vast array of problems—not least of which that making it requires an enormous amount of fossil energy. (I examined the dilemmas of synthetic N in a 2011 series at Grist.) But phosphorus and potassium cannot be synthesized—they’re found in significant amounts only in a few large deposits scattered across the planet, in the form, respectively, of phosphate rock and potash. After less than a century of industrial ag, we’re starting to burn through them. In a column in the November 14 Nature, the legendary investor Jeremy Grantham lays out why that’s a problem:

These two elements cannot be made, cannot be substituted, are necessary to grow all life forms, and are mined and depleted. It’s a scary set of statements. Former Soviet states and Canada have more than 70% of the potash. Morocco has 85% of all high-grade phosphates. It is the most important quasi-monopoly in economic history.

What happens when these fertilizers run out is a question I can’t get satisfactorily answered and, believe me, I have tried. There seems to be only one conclusion: their use must be drastically reduced in the next 20-40 years or we will begin to starve.

Why listen to this guy? Grantham, cofounder and chief strategist for the Boston firm Grantham Mayo Van Otterloo, has avoided or at least foreseen every bubble from the Japanese equity/real estate craze of the ’80s right up to our own real estate mania of the 2000s. Back in fall 2007, with the S&P 500 near all-time highs and months before the Bear Stearns nosedive, Grantham was publicly foretelling financial gloom and doom.

Grantham is also known for his real talk on climate change. The Nature piece I quoted focuses on that topic, and advises scientists to “be arrested (if necessary),” in order to inspire policy action on the climate crisis. And in a characteristically blunt November letter to his firm’s investors, Grantham argued that “we should not unnecessarily ruin a pleasant and currently very serviceable planet just to maximize the short-term pro?ts of energy companies and others.” That’s more clearly stated than you’ll get from any high-profile Democratic pol—and this from a financial titan, no less.

The next time someone facilely insists that the “industrial farms are the future,” ask what the plan is regarding phosphorus.

So, given his record of prescience and gift for getting to the heart of the matter, we should probably listen to Grantham when he says that our agricultural system is lurching toward collapse.

Of the two key fertilizers Grantham warns about, phosphorus is the more urgent. As Grantham notes, our friendly neighbor Canada sits on a vast potash stash. But phosphate rock is largely concentrated in Morocco. It’s in the country’s Western Sahara region, on highly disputed land. In a superb 2011 piece in Yale Environment 360, the environmental writer Fred Pearce explained:

The Western Sahara is an occupied territory. In 1976, when Spanish colonialists left, its neighbor Morocco invaded, and has held it ever since. Most observers believe the vast phosphate deposits were the major reason that Morocco took an interest. Whatever the truth, the Polisario Front, a rebel movement the UN recognizes as the rightful representatives of the territory, would like it back.

Given that a savvy investor like Grantham calls the “most important quasi-monopoly in economic history,” you can bet that the Polisario Front isn’t going to let the Moroccan government control it without a fight. In other words, a scarce mineral key to the future of industrial agriculture is concentrated on geopolitically fraught territory. As Pearce puts it, “If the people of Western Sahara ever resume their war to get their country back—or if the Arab Spring spreads and Morocco goes the way of Libya—then we may be adding phosphate fertilizer to the list of finite resources, such as water and land, that are constraining world food supplies sooner than we think.”

Yet something tells me that peak phosphorus will continue to be an obscure topic. I’ve been writing about it since 2008 (see here, here, here, and here). Foreign Policy ran a major piece on it in 2010; 2011 brought Pearce’s article as well as a profile > New York Times Magazine, in which he talked up peak phosphorus at length. Even after all of that, I can think of few crucial issues as far from the center of public conversation than the shortage. We’ve haven’t really begun to face the problem of climate change; our reliance on mined phosphorus doesn’t register at all. It’s easy to ignore crises whose most dire consequences loom decades away.

But the next time someone facilely insists that the “industrial farms are the future,” ask what the plan is regarding phosphorus. Developing an agriculture that’s ready for a phosphorus shortage means a massive focus on recycling the nutrients we take from the soil back into the soil—in other words, composting, not on a backyard level but rather on a society-wide scale. It also requires policies that give farmers incentives to build up organic matter in soil, so it holds in nutrients instead of letting them leach away (another massive problem stemming from our reliance on abundant NPK). Both of these solutions, of course, are specialties of organic agriculture.