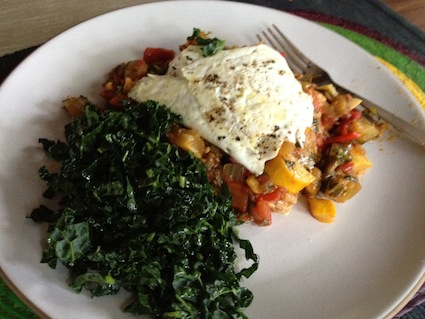 Ratatouille, served here over toast and under a fried egg, along side a salad of raw shredded kale.

Ratatouille, a classic dish from southern France, had been confounding me for years. On the one hand, it combines iconic hot-weather produce—squash, eggplant, tomatoes, red peppers, and basil—making it an ideal high-summer dish. On the other hand, I first discovered in in the early ’90s, before I had heard of farmers markets or seasonal cooking; and the recipe I used for it required long roasting. Back then, I’d make it in winter from supermarket veggies trucked in from God knows where and serve it with something hearty like polenta. It was actually quite satisfying.

And then for years, as my life turned to gardening, farming, and fixation on the farmers market, I never made ratatouille. I wasn’t going to buy tomatoes or eggplant in the winter; nor did I have any desire to heat up my kitchen with a long roast in high summer.

Then, in the process of reviewing Alice Waters’ book The Art of Simple Food a few years ago, I stumbled upon her ratatouille recipe, which in place of roasting involves a kind of extended stir fry—still a hot project, but nothing like an oven blazing at 400 degrees. (I’ve since learned that the Waters’ method is the classic method of Provence; no telling where I got the roasting idea).

With peak-of-season produce and good olive oil, ratatouille is a spectacular dish: the brightness of squash, tomatoes, and peppers, the depth of eggplant, and the pungency of onion and garlic, all melted down down into a delicious stew. And it’s a wonderful thing to cook on the weekend and have around for the work week. I served it one day as a side dish to grilled chicken breast (cue silly vegan outrage); another day tossed with pasta and chickpeas; and twice for lunch over toast and under a fried egg.

To a heavy-bottomed pot, add a good glug of olive and turn heat to medium. When the oil begins to shimmer, add the eggplant and a pinch of salt and cook, stirring often, until the eggplant chunks are golden. Properly browning the eggplant will add enormous flavor to the final dish. (Waters has you salt the eggplant chunks and let them drain in a colander before cooking, but I’ve never found that necessary with farmers market eggplant). Set the eggplant aside. Add another glug of olive oil and and the onions to the pot, still over medium heat, and cook until the onions are translucent. Add the garlic, the chopped hot pepper or pinch of chile flakes, a pinch of salt, and the unchopped half of the basil and cook, stirring, another few minutes. Now add the sweet peppers plus a pinch of salt and cook for a few minutes; then same with the squash, and finally the tomatoes. Now cook, stirring occasionally, for about 10 minutes; then stir in the eggplant and cook another 10-15 minutes, until the veggies have become quite soft and have almost melted. Remove the bunch of whole basil leaves, “pressing to extract all of its flavors,” advises Waters (I pressed it with a wooden spoon against the side of the pot), and taste and adjust for salt. Garnish each serving with a lashing of olive oil and a riot of chopped parsley and basil.