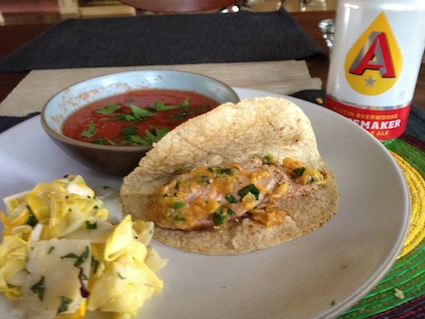 In the Austin summer, the phrase “outdoor cooking” sounds as much like a weather report as it does a culinary activity. Last year, temperatures in Austin exceeded 100 degrees no fewer than 90 times—shattering the previous record of 69 days set in 1925. Just last week ago, the temperature hit 109 degrees—an all-time record for June.

But under a big shade tree in the early evening, when the sun has waned and the temperature has dropped to, oh, 95 degrees, firing up the grill remains an appealing option. It gets you out of the house—and frees you from heating up the house with a bunch of cooking.

That’s exactly what I did recently, and in classic Tom’s Kitchen style, I kept it really simple. I got hold of a few pasture-raised pork loins, plus some tomatoes and peaches, all grown here in central Texas. I looked south to Mexico for inspiration.

For Pork
2 pounds pasture-raised pork loin (4 loins)
3 cloves of garlic, crushed and peeled
1-2 chipotle peppers in adobo, from a can
The grated zest of one lime
Herbs such as a bit of fresh or dried oregano and/or thyme (optional—I didn’t have any on hand)
Sea salt, freshly ground black pepper
Olive oil

First, make the marinade—at least 2 hours in advance of cooking, and preferably, the night before. Put the garlic, chipotle peppers, lime zest, a generous pinch of salt, and a vigorous grind of black pepper in a food processor or blender. With the machine whirring, add a thin stream of olive oil to the mix, blending until you have a smooth emulsion. You may have to stop and scrape down the sides of the blender or processor, and puree again, to get everything smooth. Taste the marinade. It should be good and salty—the salt will help carry the flavors inside the meat. Adjust accordingly.

Place the pork loins in a sturdy plastic bag large enough to hold them—or if you don’t have one big enough, divide them into two smaller ones—and dump the marinade on top, dividing it over the two if necessary. Seal the bag(s), rinse them, wash your hands, and then massage the pork gently through the plastic, distributing the marinade as evenly as possible. Place the bag(s) in a bowl in the fridge until about an hour before you’re ready to cook.

Next, on the same day as you’re grilling, make the peach salsa. Peel the peaches, remove the flesh from the stone, chop it coarsely, and add it to a serving bowl. Mince the garlic and one off the two serrano chiles very fine, adding a pinch of salt to them as you mince to break them down as much as possible into a paste. Add them to the bowl with the peaches. Add a glug of olive oil and a good squeeze of lime, and then stir to combine. Taste. If you want more of a kick, break down the other chile like you did the first one, and add half of it. Taste. Adjust for seasoning, adding more salt, chile, or lime if necessary, and set aside.

Now prepare your grill. I use a simple Weber model with one of those chimney charcoal starters, stocked with  lump hardwood charcoal. When the coals are white hot, I make a hot side and a cool side by mounding most of the coals on one side of the grill pit and spreading just a few out across the other. When I’ve placed the grill atop the carefully arranged coals, I wipe it with a clean rag dipped in cooking oil, and give it a few minutes to get hot.

Lay the loins, close together but not touching, on the hot side of the grill. They should sizzle when they hit the surface. Let them sear until they’re good and brown on all sides, and then move them to the cool side.

Move the tomatoes and onion slices to a blender when they’re charred all over. (Don’t worry about coring them.)

Station one person at the grill, and have him or her grill tortillas on the hot side, flipping them once and lightly toasting them on both sides. As they’re done, swaddle them in a clean kitchen towel to keep them warm.

Put someone else in charge of the gazpacho. To the charred tomatoes and onion, add the chile(s), the garlic, a pinch of salt, and a generous grind of pepper, a few ice cubes, and one of those grilled tortillas, torn in half. Blend until everything is smooth. Taste and adjust for seasoning.

To serve, cut the pork into thin slices, at an angle, and place on a serving plate. Divide the gazpacho into four bowls, adding an ice cube to each to chill it down a bit, and garnish each with a drizzle of olive oil. Let everyone assemble his or her own tacos, garnishing with peach salsa. Have someone else make a side dish—my friend made a lovely one of thinly sliced summer squash and zucchini, lightly baked and finished with shaved hard cheese.