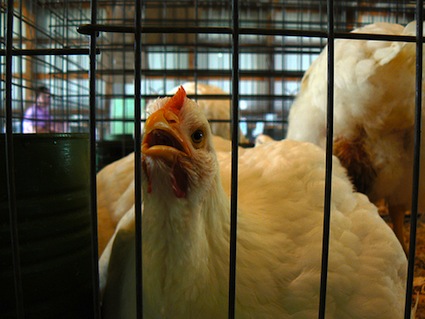 You know how sometimes you get into a high-stakes conversation and you think of the perfect things to say after it’s over? Well, here’s a factoid I wish I had dropped during last week’s interview with Terry Gross on her NPR show Fresh Air: “The number of chickens produced  annually in the United States has increased by more than 1,400 percent since 1950 while the number of farms producing those birds has dropped by 98 percent.”

Those startling numbers and many more appear in a new report from a group called Georgians for Pastured Poultry, an alliance that includes pastured-based poultry farms, chefs, the Sierra Club, and an environmental law firm called GreenLaw. (Hat tip to the excellent Maryn McKenna.) The report reads like the black book of industrial chicken farming—a kind of dossier of the ills of rounding up billions (yes, billions) of birds into tight spaces and fattening them as quickly as possible.

It’s easy to understand why some Georgians might come together to promote alternative forms of chicken production. The poultry industry has alighted upon Georgia in a way it hasn’t any other individual state. According to the report, which is lavishly footnoted and was prepared with the help of grad students from Emory University’s Department of Environmental Health, the US now produces 8.84 billion broilers (meat chickens) every year—of which 1.4 billion, or nearly one in six, are produced in Georgia

The state’s annual broiler flock, roughly equal in number to the human population of China, takes place on just 2,170 farms—meaning that each one produces a mind-numbing 640,000 birds, collectively churning 2 million tons of chicken litter (feces plus bedding and other waste).

Concentrating so much waste, laced as it is with arsenic and antibiotic-resistant pathogens along with algae-feeding nitrogen and phosphorpus, is bound to cause problems, which are well laid out in this report (and pretty familiar to readers of my blog).

One thing the report focuses on that I haven’t much is the role of breeding in modern poultry production. I’ve mentioned the awful conditions broilers face in their brief lives: the constant lighting, to trick them into eating more, and the tiny space they’re allotted, about the size of a standard sheet of paper for each bird.

But what’s perhaps even more gruesome is that they’re essentially bred to be sick and miserable. Pointing to figures from the industry trade journal WATT PoultryUSA, the report drops the amazing fact that just two companies produce as much as 85 percent of the globe’s breeding broilers, ie, the ones that hatch the birds that end up on factory farms. By selecting for traits like massive breasts and rapid growth, these firms have mastered the art of producing birds that grow incredibly big, incredibly fast.

As recently as 1980, a finished broiler weighed in at about 3.8 pounds. Today, the figure is 5.65 pounds—a 33 percent increase in just three decades. Meanwhile, the time it takes to get them to slaughter weight has plunged. A broiler can now go from hatchling to raw material for chicken nuggets in as little as 42 days—representing a growth rate four times as fast as those that prevailed just 50 years ago.

A broiler can now go from hatchling to chicken nugget fodder in as little as 42 days.

All of this is great for chicken-loving consumers and the the bottom lines of the companies that dominate chicken production: Tyson, Pilgrim’s Pride (majority-owned by Brazilian meat giant JBS), and Perdue. For the birds themselves, it means growing faster and bigger than either their joints or their cardiovascular systems can handle, creating mutant creatures routinely burdened with leg injuries and heart trouble.

The report also includes an excellent discussion of state and national regulatory regime that essentially props up industrial poultry production by letting it largely off the hook for the air and water pollution; while simultaneously holding back pastured-based poultry farming through strict enforcement of rules that prohibit on-farm slaughter.

It also features an apt summary of the dire conditions faced by workers in poultry slaughterhouses large enough to kill 200,000 birds in a single day. Because of reliance on fast kill lines, sharp knives, and relentless repetitive motion, poultry slaughterhouse work routinely ranks among the most dangerous of US occupations, the report shows. And official figures may underestimate the hazards. Here’s why:

In Georgia, because of the state’s lack of anti-retaliation protections, a worker who  reports her work-related injury in order to seek workers’ compensation benefits like  medical treatment and partial pay for time when she is unable to work may lawfully be fired for filing or pursuing a workers’ compensation claim.

When you read this section, consider that the Obama administration is proposing new rules that would allow the industry to significantly speed up poultry kill lines, exacerbating all of these problems and giving (buy its own account) a $250 million per year gift to the industry.

That a Democratic president is casually offering up such a sweet gift to a brutal industry testifies to its political power. That citizens of Georgia, capital of factory poultry production, are publicly airing the industry’s dirty secrets and pushing for reform shows that the industry is simultaneously quite vulnerable. The more people know about what they’re getting along with their cheap nuggets and “chicken tenders,” the more likely they’ll be to flock to alternatives.