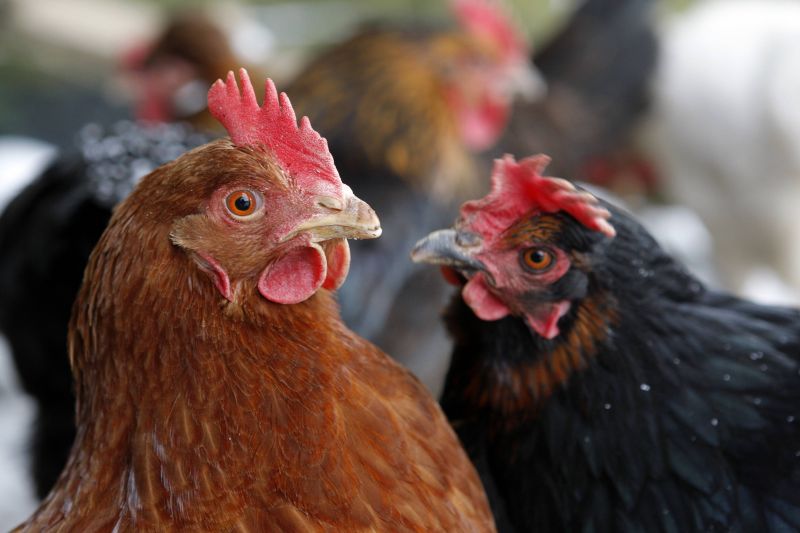 So the system works, right? A federal regulatory agency conducts rigorous tests, detects a problem, and industry reacts by doing the right thing. Except, not so much. A closer look at the arsenic-laced feed saga reveals a tattered, industry-dominated regulatory regime that abuses public health and the environment alike.

The story goes like this. In the ’40s, the pharmaceutical industry began marketing a nifty new poultry feed additive bearing the charming name of roxarsone. The chemical helped control parasitic ailment common to chickens called coccidiosis. But that was just part of its appeal. As the poultry-processing industry consolidated into the hands of just a few companies over the post-war decades, poultry farmers had to scale up and fatten their chickens as quickly as possible. Roxarsone helped with that, too—it’s a growth enhancer. What’s more, it contributes to that rosy-pink hue consumers have come to associated with fresh chicken meat.

Chickens experience additional stress in large-scale poultry facilities, known as confined animal feeding operations (CAFOs), where access to natural sunlight is almost nonexistent and having 25,000 to 30,000 birds per chicken house is common. As chicken production industrialized, coccidia have proven to be very adaptable and, thus far, impossible to eradicate. In 2005, Dr. David Chapman, renowned in the field of coccidial research, claimed that “As long as chickens are raised on the ground and therefore in contact with their feces, then coccidiosis will remain a threat to the poultry industry.” Anticoccidials, arsenical growth promoters and antibiotics have thus been used to maintain the health of larger flocks.

The problem, of course, is that roxarsone contains arsenic. For decades, the industry and its overseers assured farmers and consumers that poison-laced feed wasn’t a problem, because the additive delivers arsenic in organic form, which is much less toxic than its inorganic state. But evidence has been mounting that the arsenic in roxarsone is anything but stable—it shifts from organic to inorganic form under anaerobic conditions, and probably in the intestinal tracts of chickens. Inorganic arsenic is vile stuff. According to Food and Water Watch, “Chronic exposure to arsenic is associated with increased risk for several kinds of cancer, including bladder, kidney, lung, liver and prostate.” Moreover, “Arsenic exposure is associated with increased risk of cardiovascular disease and diabetes, as well as neurological problems in children.”

As far back as 1999, concern about arsenic in roxarsone going inorganic spurred the European Union to ban its use; and the US poultry giant Tyson, no doubt fearing liability issues, stopped using it in 2004. But the broader industry kept right on dosing its birds with the arsenic-laced stuff, and the FDA and USDA did nothing to rein them in.

But by 2004, a Chemical Engineering News article shows, a USDA researcher was concerned enough to examine technical data kept by roxarsone producer Alpharma (later acquired by Pfizer). What she found was alarming: Roxarsone-treated chicken has “three to four times greater than [inorganic] arsenic levels in other types of poultry and meat from other animals”—levels that for heavy chicken eaters, would be “greater than the tolerable daily intake recommended by the World Health Organization.”

You might expect such a finding to spur government regulators into action—to perform a rigorous battery of tests on supermarket chicken and intervene if a health threat emerged. But neither the USDA, which oversees food safety in meat production, nor the FDA, which has a broad food safety mandate, did anything at all.

Then, in a peer-reviewed study published in 2006, researchers from the University of Arizona and the U.S. Geological Survey found that the arsenic in roxarsone goes inorganic rapidly in chicken manure—disturbing, since the poultry industry concentrates vast amounts of waste that must somehow be gotten rid of. It gets spread on farm fields (where it can contaminate water tables) and converted into widely used pelleted fertilizer—meaning that inorganic arsenic moves far and wide from its origin in feed additive. That same year, researcher from Johns Hopkins found heightened inorganic arsenic levels in tap water where manure from roxarsone-treated chickens get spread; and researchers from the Institute for Agriculture and Trade Policy did what no federal regulator had ever done: actually test supermarket chicken for inorganic arsenic. They found that “nearly three-quarters of the raw chicken breasts, thighs, and livers from conventional producers that we tested carried detectable levels of arsenic.”

Until this year, the US regulatory agencies have reacted to these revelations with silence. The FDA finally got around to testing supermarket chicken samples very recently, and found significantly higher inorganic arsenic levels in meat from roxarsone-treated birds. That finding prompted action: Pfizer’s decision to pull its roxarsone within a month. But the action is completely voluntary, and Pfizer is the largest, but not the only, producer of it. According to Food and Water Watch, Pfizer’s Alpharma division produces about half of the roxarsone used in the US. What about the other half? The FDA doesn’t seem to have the appetite to force an outright ban. In its recent press release, the agency saw fit to sugarcoat its findings: “FDA officials stress that the levels of inorganic arsenic detected were very low and that continuing to eat chicken as 3-Nitro [Pfizer’s product] is suspended from the market does not pose a health risk.”

Most likely, Pfizer’s move will spur the poultry industry to wean itself completely from the dodgy additive … eventually. At this point, what’s the rush? Twelve years after the European Union banned roxarsone, five years after it emerged as an obvious public-health menace in the scientific literature, US farmers were still applying 2 million pounds of it to chicken feed each year at the time of Pfizer’s decision, Food and Water Watch estimates. And whether they liked it or not, millions of consumers were—in fact, still are—getting a nice dash of arsenic with their nuggets.