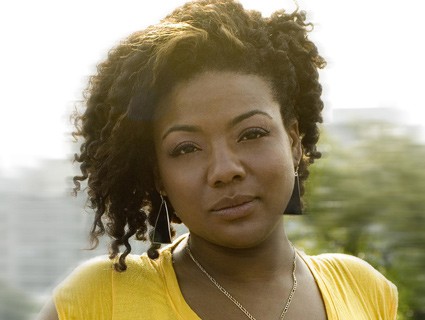 San Francisco Bay Area rapper Jennifer Johns has Michael Jackson and Lionel Richie to thank for her political awakening. Back in 1985, when she was just an East Oakland six-year-old with a knack for song, she heard Jackson’s and Richie’s “We are the World” for the first time. The tune, her parents told her, was about poverty and hunger in Africa. “First off, I said where the hell is Africa?” Johns remembers. “And secondly, I don’t get this concept of hunger because we have so much food, we have so much extra here.”

But she caught on quickly. The spunky youngster organized a sing-a-thon with her church, raised some money, and sent it to Bishop Tutu in South Africa to aid his fight against poverty, discrimination, and apartheid. “In that moment, I learned there was some shit going on,” Johns says. “At the same time, I learned that one could sing and inspire people to know things. That was powerful.”

Now Johns, 32, is doing precisely that: helping people “know things” as an ardent food-justice advocate even as she pursues a hip-hop career. A “b-girl at heart,” she has performed with the likes of Lauryn Hill, Talib Kweli, KRS-One and Mos Def. Her first album, HeavyElectroMagneticSoularPoeticJungleHop, is as polychromatic as its title, ranging from thick R&B harmonies to hard-hitting rap and zingy electronica. Released in 2007, her second album, Painting on Wax, only takes the feistiness up a notch.

If you haven’t heard of Johns, it’s probably because she took a break from the mainstream stage a few years ago, after her mom was diagnosed with Diverticular disease—a digestive disorder sometimes linked to processed foods. She’s been a food activist ever since. Johns became a fellow with Green for All, a group that aims to help people in low-income neighborhoods live more sustainably. She also cofounded the food-justice advocacy group Go Live: Real Food!, and spent part of this past summer studying food systems in Kenya and Uganda, exploring Nairobi farms and Kampala slums where, amid “ravines of waste” and water that’s “neon green,” she got a lesson in “some of the most gangsta urban farming I’ve ever seen.”

She gets involved in other causes, too. In 2009, she organized and sang at an Oakland rally in memory of Oscar Grant, who was shot by a police officer who had him in custody on a light-rail platform. Just a few weeks ago, she performed at a teach-in as part of Occupy Oakland’s “general strike.”

I first saw Johns perform a couple of months ago at an Oakland event to celebrate “Food & Freedom Rides,” a cross-country road trip by 25 young activists to push for reforms—like better conditions for farmworkers and access to healthy foods for low-income communities—in advance of Congress’ 2012 farm bill reevaluation.

I’d shown up hoping to get the scoop on said bill, but the evening turned out to be a party, not a politics lecture. Yet when Johns took to the stage, it began to feel like both. Her voice is staggering in its power, and her songs are fiery, bass-heavy sermons, preaching the problems of the oppressed and the merits of healing. Given her punchy lyrics and stunning delivery, it was hard not to vibe with the possibilities.

“In my mind, sustainable living is the opposite of poverty,” she says. “If you know that there is food, then you operate in such a way that you’re going to create that food. Everybody knows the term ‘poverty.’ So maybe I can get people to talk about sustainable living if I can get them to identify with what its opposite is.”

Johns can rattle off a list of ways she’d like Congress to improve the farm bill, like adding more regional food subsidies atop the longstanding national subsidies for commodity crops. Low-income communities need resources to build sustainability, she grumbles, whereas the food-aid business is using up its roughly $2 billion budget to help other nations in largely ineffective ways.

But Johns doesn’t expect too much change coming from Capitol Hill. “We’ve been trying to do something around the farm bill for god knows how long,” she says. “This needs to be a cultural movement. We need to create culture around having localized food systems. Politically, with our budget being what it is, and the presidential elections coming up, I think we’re gonna get screwed.”

And here’s a recent performance at a tribute to Nobel Prize-winning sustainability activist Wangari Maathai (starts at 6:40):