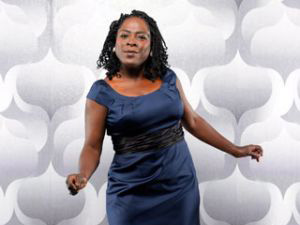 Sharon Jones, the 54-years-strong soul chanteuse of Sharon Jones and the Dap Kings, has defied so many odds you’d think the band’s latest album, I Learned the Hard Way, was about her. Jones swears it’s not, though. The Dap Kings write her funk-filled songs. “She Ain’t a Child No More,” for instance, is about parents coming home, getting drunk, and beating their children. “My parents never did do that to me,” the Georgia native says. “But they beat and abused themselves—that’s why my mother separated from my father. He used to beat her. Maybe that’s one of the reasons I haven’t gotten married. I don’t even have any children.”

Jones is pretty much the most honest person you could hope to interview. She’s openly talked about making it in the music industry the hard way. Before the New York Times dubbed her a “timeless soul singer” and Stephen Colbert called her “fierce,” the raspy-voiced diva dropped her first album with the Dap Kings when she was in her forties. She tried breaking through in the music industry two decades earlier, she says. “But I didn’t have the looks. This Sony guy told me I was too black, too fat, too short, and too old. Told me to go and bleach my skin. Told me to step in the background and just stay back.” After getting turned down, Jones worked as a Rikers Island corrections officer, a Wells Fargo security guard, a sanitation officer, in postal offices, and as a wedding singer. “I was still doing the Wells Fargo thing when I met the Dap Kings,” she says. For all those years, she knew she could really sing. “I just thought, “One day. One day.” And that day came when I met those guys.”

All of that hard-luck history can be heard in Jones’ untrained brassy vocals. She may not write the songs, but she’s grown the soul to sing them, and some other people have noticed, as well. In 2007, she landed a cameo in Denzel Washington’s film The Great Debaters and sang most of the soundtrack. More recently, Jones and crew opened for Prince at Madison Square Garden. “I would have loved to have did some of this in my youth,” Jones muses. “But that’s okay. Probably in my youth, I wouldn’t have been able to handle it.” Mother Jones spoke with the “Queen of Funk” about becoming famous at middle age, how she shocked Prince, and why Tyler Perry should really put her in one of his movies.

Mother Jones: Where you living these days?

Sharon Jones: I just bought a home in South Carolina for my mom. I moved in with her in 2000 after a bad engagement. He was a horn player; if I hadn’t of met him, I wouldn’t have met the guys in the band. That’s what I got out of that relationship: the Dap-Kings!

MJ: Did you always know that you wanted to be a professional singer?

SJ: Yes. Even when I was a little kid standing on the chair, singing to the spoon or a knife or a pencil or a brush and imitating Mary Wells or the Supremes, or Aretha Franklin, Patti Labelle, James Brown, Otis Redding. I was blessed because I was born in ’56. I was out there during all that good stuff. [Laughs.] You know, the soul, the funk, R&B—I was even there when it went pop. I watched Michael and Prince and a young lady Whitney coming in. I watched some of my old friends come on too, like Al Jarreau and Anita Baker. They still hanging in there and they were on up there in age when they got out there.

“I’m lookin’ at these Disney characters, these young girls coming out looking like, little whores.”

MJ: You’ve been singing ever since you played an angel in church in the third grade, but your first album was released when you were 40. Why’d it take you so long to break through?

SJ: Until the ’90s, major labels were looking for a certain look. This Sony guy told me I was “too black, too fat, too short, and too old.” Told me to go and bleach my skin. Told me to step in the background and just stay back. I had the voice, but I didn’t have the looks. I knew that God had blessed me with a gift, so that’s when I went and took jobs in corrections [at Riker’s Island], sanitation, postal offices. You couldn’t be in any kind of musical career and work in corrections too. You’re working on the wheel, 11 at night till 8 in the morning, then the next time you’re on at 8 in the morning to 4 in the afternoon. I left there and went to Wells Fargo to work security. I was still doing the Wells Fargo thing when I met the Dap-Kings, and that’s it. I just thought, “One day. One day.” And that day came when I met those guys.

MJ: Do you think the kind of bias you experienced affects the quality of the music coming out of the industry today?

SJ: It has been the same for years. That’s what’s selling. The girls gotta be half-naked, half-exposed. They gotta be tall, light-skinned, and beautiful lookin’ and can shake and dance. Some of ’em don’t even have to dance! All they have to do is half-dress and come out there, and then they do the same thing. I’m lookin’ at these Disney characters, these young girls coming out looking like, excuse my language, little whores. Fifteen, 16 years old out there with their tits. Want boob jobs, excuse my language, boob jobs done. Tonin’ themselves. Doing things with guys and on poles in certain ways like they’re on a Playboy cover. It’s been like that, but it just started getting worse. You listen to the words and they talking about how they wanna do ’em, and something something “Baby, let me fuck-a, suck-a” all this thing. Everybody got our hang-ups. That’s the way I look it. But my body ain’t working like that. There ain’t no way I’m going to be droppin’ nothing. If I was in my twenties, maybe. But now I try to keep it looking decent. I don’t want to expose too much of my bare ass. [Laughs.]

MJ: Yeah, you shake it on stage. It looks good.

SJ: I try, I try. Gotta keep up with those young folks. Once I get to that point when I can’t move it like that, oop, time to sit down.

MJ: Speaking of keeping up with young folks, I don’t think I’ve ever heard you use Auto-Tune on any of your songs.

SJ: Nope. You’re not going to hear that. Not unless I’m on someone else’s record. Not on Daptone. We gonna try and stick to the soul and R&B and stuff. That’s the sound we goin’ for. Anybody want to come to our label, make sure you got some soul. [Laughs.]

MJ: You really seem to be channeling James Brown on stage. What’s funk got that originally spoke to you?

“Anybody want to come to our label, make sure you got some soul.”

SJ:  It was basically James Brown, Dyke & the Blazers, The JB’s, that soul era, that particular funk that we started off on with Desco [Records], when we did our first record “Dap Dippin With…” If you get all four of our albums just sit back, listen to the quality, listen to the sound of the music, the style. We’re not changing. On Daptone Records we’re still playing songs from the ’60s, ’70s, and who knows, we might get into certain parts of the ’80s. Basically, we like that R&B and soul sound. And that’s what we are.

In this last album we would start off with like, “The Game Gets Old,” almost like the Philadelphia Harmonics [she makes a dududalooo! sound], to “Mama Don’t Like My Man“—that’s acoustic guitar, hand claps. That’s the great thing with being an independent label, because any major label would be like, “The Game Gets Old” don’t fit. You can fit anything you want. You put out what you want to put out. If you like it and the people like it, that’s all that should matter.

MJ: Tell me about working as a wedding singer. Do you use any of those experiences in your music now?

SJ: No. I loved the wedding band. I did a lot of Whitney Houston songs. We had our great old sets, but then people started requesting Cristina Aguilera and I’m like “Uh-Oh!” I had to learn, what was that one Jennifer Lopez song?—”Waiting for Tonight.” I’ve stopped doing weddings. It just got too pop.

MJ: You played with Prince at Madison Square Garden!

SJ: He saw me on Austin City Limits. He was like, “Whoa, who’s that?” He said I took him to church, and that was the reason he got us together. That was like a dream come true. I never got to meet Michael Jackson and he’s gone—so to be on stage with Prince was like if Michael…you know what I’m saying? And Prince, he’s just such a warmhearted guy. He’s so humble. He’s such a spiritual man. I like his style. I’m like, what? Two or three years older than him, and he’s been out here since the ’80s. You don’t everyday read stuff about him, but he’s lived his life over the years, and he’s still Prince. And he got the right name. They call Michael the “King of Pop,” but Prince takes it all. He’s the “King Prince of Pop!”

MJ: What do you see yourself tackling in the future?

SJ: More good albums. I hope to collaborate more, maybe write a movie, and I want us to do some soundtracks. My goal is maybe to help get some of these young people out here when I get to the age when I don’t want to be flyin’ and jumpin’ around the stage, you know, my body all hurtin.’ Keep the soul going. I don’t want Daptone label to die. I want the label to be around for the next 20, 30, 40, 50 years! Pass it on down to other generations. Let’s be another Motown, another Stax, whatever other major labels out there. I’d love to get into one of Tyler Perry’s movies—play a little role, have a little character. I don’t care. But more than two lines! More than two words!