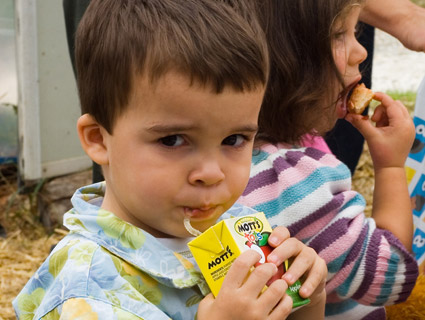 “I’d hate to take a bite out of you,” Burt Lancaster hisses at Tony Curtis in the classic ’50s film Sweet Smell of Success. “You’re a cookie full of arsenic.” The line resonates to this day, because it’s jarring to picture something as comforting and innocuous as a cookie being laced with a notorious poison.

And that’s precisely what Consumer Reports forces us to do with its just-released story on apple and grape juice—you know, the stuff millions of people feed to their kids every day, sometimes several times a day, in those little boxes. And as with the confection in Lancaster’s insult, the poison in question is arsenic.

The FDA currently does not regulate arsenic levels in fruit juices, CR reports. But for bottled and tap water, the agency enforces a standard of no more than 10 parts per billion of arsenic.

The magazine tested 88 samples of apple and grape juice, acquired from retail outlets in three different states. Samples were drawn from juice in both concentrate and ready-to-drink forms, including juice boxes. All of the samples contained discernible arsenic samples; nine of them, or 10 percent of the total, were found to have arsenic levels that exceeded the drinking-water limit of 10 parts per billion. The samples were also tested for lead—and 25 percent showed levels higher than the FDA’s lead standard for bottled water, which is 5 ppb.

The Consumer Reports findings follow on the heels of the recent set of tests conducted by the personal-health TV program The Dr. Oz Show, which found similar results and aired them on national television. In a September 9 letter to the show’s producer, an FDA official dismissed the findings, charging the tests did not distinguish between arsenic in its inorganic form, which is highly toxic, and its organic form, which is relatively benign. The letter rebuked the show for publicizing the results, calling it “irresponsible and misleading.”

In other words, the agency contradicts its own “essentially harmless” claim about about organic arsenic. Indeed, its entire stance on arsenic in juice is laced with contradiction. Its website contains a page intended for consumers called “Apple juice is safe to drink,” which states: “There is no evidence of any public health risk from drinking these juices. And FDA has been testing them for years.”

But in a November 21 letter to the watchdog group Food and Water Watch, the agency revealed that its own testing had turned up alarming levels of arsenic in juice. The letter states that the FDA tested 160 apple juice samples between 2005 and 2011 and found that “almost 88 percent had fewer than 10 ppb total arsenic, and 95 percent had total arsenic levels below 23 ppb total arsenic.” Turning that around, though, shows that more than 12 percent of samples had arsenic levels above 10 parts per billion—the agency’s own drinking-water standard—and 5 percent had levels above 23 ppb. These results are similar to those of Consumer Reports.

And despite its public insistence that apple juice is safe to drink, full stop, the Food and Water Watch letter also reveals that the FDA is in fact “seriously considering” setting limits on the amount of arsenic it will allow in juice and is “collecting all relevant information to evaluate and determine an appropriate level.”

So how much reason is there to be concerned about the trace of poison lurking in your kids’ juice box? To find out, Consumer Reports commissioned an analysis by of data from the National Health and Nutrition Examination Survey (NHANES), which is conducted annually by the National Center for Health. The results are not comforting:

The resulting analysis of almost 3,000 study participants found that those reporting apple juice consumption had on average 19 percent greater levels of total urinary arsenic than those subjects who did not, and those who reported drinking grape juice had 20 percent higher levels. The results might understate the correlation between juice consumption and urinary arsenic levels because NHANES urinary data exclude children younger than 7, who tend to be big juice drinkers.

And steady exposure to low levels of arsenic is linked to reduced intellectual capacity. Consumer Reports points to a 2004 study by Columbia University researchers showing decreased intellectual function in children exposed to drinking water with arsenic levels above 5 ppb as well as a 2011 study by Texas researchers finding that low-level arsenic exposure is “significantly related to poorer scores in language, visuospatial skills, and executive functioning” and “poorer scores in global cognition, processing speed, and immediate memory.”

Moreover, kids—a prime target market for the juice industry—are the most vulnerable of all. “Recent studies have shown that early childhood exposure to arsenic carries the most serious long term risk,” researcher  Joshua Hamilton of the Marine Biological Laboratory told Consumer Reports. “So even though reducing arsenic exposure is important for everyone, we need to pay special attention to protecting pregnant moms, babies, and young kids.”

So how is arsenic entering the juice supply in the first place? In terms of geographic region, it’s hard to say, because despite the dizzying array of juice brands, the big companies buy and repackage concentrates from the same set of global suppliers. In its study, Consumer Reports could not tie the presence of arsenic to any one place.

A much bigger test than ours would be needed to establish any correlation between elevated arsenic or lead levels and the juice concentrate’s country of origin. Samples we tested included some made from concentrate from multiple countries including Argentina, China, New Zealand, South Africa, and Turkey; others came from a single country. A few samples solely from the U.S. had elevated levels of lead or arsenic, and others did not. The same was true for samples containing only Chinese concentrate.

The likely main source of contamination both in the United States and abroad, Consumer Reports reckons, is soil tainted with arsenate pesticides, which have been banned for decades in the US but persist in soil. Arsenic-based pesticides were once a staple on US apple orchards, Urvashi Rangan, director of consumer safety and sustainability, told me. And that factor means that not even buying organic juice necessarily protects you from this one—even organically managed apple trees can take up poisons applied long ago.

Until the FDA steps up its monitoring of arsenic in juice and imposes limits that make sense—Consumer Union, the advocacy group that publishes Consumer Reports, is pushing for 3 ppb—it might be time to wrestle that juice box out of junior’s hand.

In the meantime, what brands turned up with the most arsenic? The article emphasizes that the sample size was too small to say anything definitive about any particular brand. That said, Consumer Reports has produced this highly informative chart (PDF), which shows the arsenic and lead content of each sample, breaking down inorganic versus organic arsenic and country of origin for each one. The brands that fared worst (again, I should stress the caveat about sample size) were Walgreens grape juice, Welch’s grape juice, Walmart’s Great Value apple juice, and Mott’s apple juice in juice boxes. Samples of the two organic brands in the test, Whole Foods’ 365 Everyday Value organic apple juice and Gerber Organic apple juice, had arsenic content of around 7 parts per billion (Whole Foods) and 5 parts per billion (Gerber)—well above Consumer Union’s desired threshold, but below the FDA’s drinking-water standard.