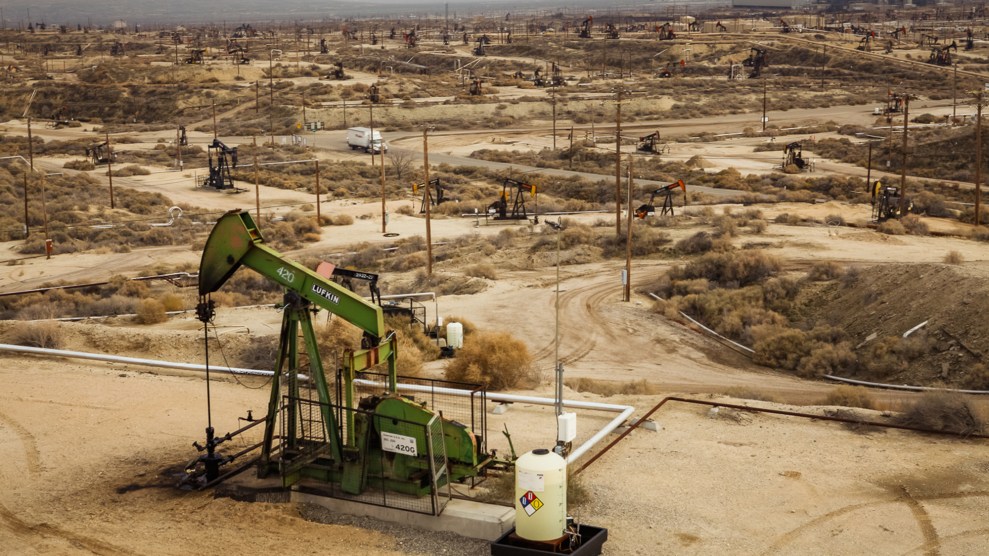 Oil and gas infrastructure on BLM land in Kern County, California.Courtesy of BLM

This story was originally published by High Country News, and is reproduced here as part of the Climate Desk collaboration.

On the Friday after Thanksgiving—a day the federal government notoriously reserves for dropping politically inexpedient information—activists were blindsided by a long-anticipated report from the US Department of the Interior. The document was a review of the agency’s oil and gas leasing program, which manages fossil fuel extraction on federal public lands and waters.

Climate activists were hopeful that the Biden administration would recommend a wholesale ban on new federal oil and gas leasing. But while the report proposes a substantial overhaul of the leasing system, many environmentalists viewed it as weak on climate action. They believe that Interior’s recommendations signaled an unwillingness to take bold steps to address the urgency of the climate crisis.

The administration could’ve executed “with power, speed and agility. Instead, it’s running that gantlet weak, slow, and tentative.”

“We’re sympathetic to the political gantlet the Biden administration must run,” said Erik Schlenker-Goodrich, executive director of the Western Environmental Law Center, in a statement. “But it had a choice to run it with power, speed and agility. Instead, it’s running that gantlet weak, slow, and tentative.”

Rather than call for a halt on new oil and gas leasing, the report focused on increasing royalty rates on new leases, said Jeremy Nichols, director of the climate and energy program at WildEarth Guardians. “The fact that it applies to new leases signals new oil and gas development,” he said. “The department seems to be signaling that it wants to do everything it can to keep the oil and gas industry going. That is not a climate solution.”

Changing the royalty rate would, however, benefit Western states. New Mexico and Wyoming hold over half the program’s leases and together take in well over a billion dollars a year from combined royalties—the revenue shares paid to state governments by oil and gas companies. The money helps fund schools, roads and other public goods.

But royalties are incredibly volatile and exist at the whim of a boom-and-bust industry. Onshore oil and gas companies currently pay a 12.5 percent royalty rate—a figure set more than a century ago. The report notes that many oil-producing states and private landowners require much higher rates, up to 25 percent in some cases.

Firms pay $150,000 to cover future cleanup of all their wells on public land—but cleaning up just one well can cost that much.

The Interior Department also recommends addressing the root financial cause of so-called “orphaned wells” on public land. When oil and gas companies go bankrupt, they often liquidate their assets, an act that can result in wells becoming abandoned. When that happens, the cost of cleanup falls on taxpayers. According to a report by the Western Wildlife Federation, in 2018 there were 8,050 inactive wells “orphaned or at risk of being orphaned on federal lands” across five Western states.

To solve this problem, the Interior Department argued that “bonding levels”—the amount of money companies pay up front to cover future cleanups—need to be raised to pay for these wells before they are abandoned. The current leasing system allows companies to purchase what are known as blanket bonds, in which a single bond covers a large number of wells.

That allows a company to buy one $25,000 bond to cover all of its wells in a single state, or a $150,000 bond to cover all the wells it operates on public lands across the country. The problem with this model is that the average cleanup cost for a single orphaned well can run anywhere from $20,000 to $145,000, according to a Government Accountability Office report.

Conservationists and environmental activists welcome these recommended reforms, said Nichols, but Westerners are already paying increasing amounts for climate inaction as wildfires, floods and drought worsen. “It seems like this administration is cowering,” he said. “There’s an unwillingness for them to own the issue and play a role in confronting the climate crisis.”