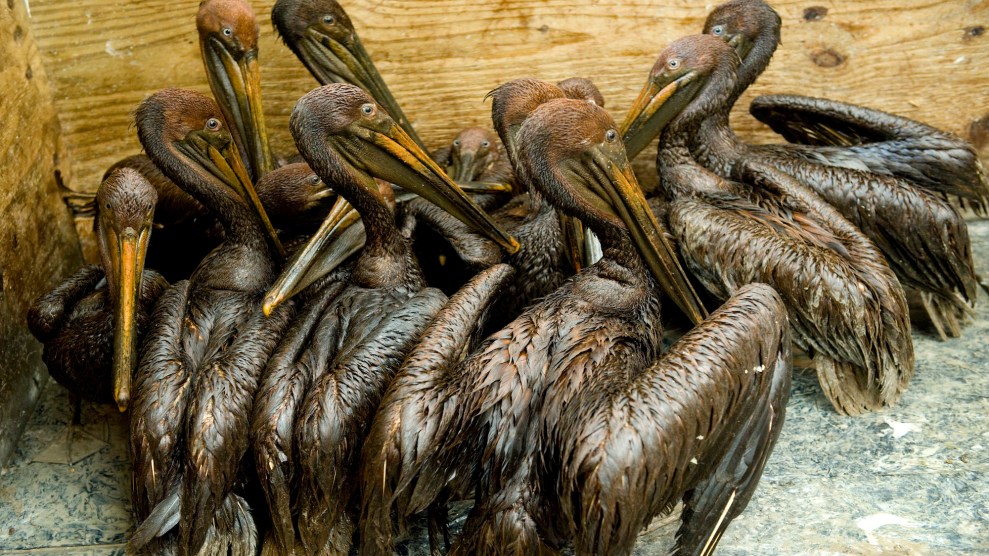 Oil from the Huntington Beach spill continues to befoul the Pacific Ocean off Southern California, upending delicate ecosystems home to marine life and rare species of birds, and causing damage that is expected to last for decades.

An estimated 144,000 gallons of oil gushed into the sea over the weekend before Amplify Energy Corp., owner of the ruptured pipeline, shut it down after a more than three hour delay. NPR reports that the company then waited three hours more before reporting the spill, further delaying action. As agencies triage the mess, eyes have also turned to the Coast Guard, questioning its role in a slow response that may have made things worse.

Whomever shares the immediate blame, it was systemic under-regulation that set the scene for the spill. The National Oceanic and Atmospheric Administration  responds to more than 150 oil and chemical spills in US waters each year. But earlier this year, a report by the Government Accountability Office warned that the federal Bureau of Safety and Environmental Enforcement, responsible for overseeing construction and monitoring of offshore oil drilling, was failing to properly monitor and inspect active pipelines.

Rather than doing inspections, the report found, the BSEE instead relied on pressure sensors operated by the companies themselves and monthly “surface observations” that also were overseen by the pipeline companies.

Since the 1940s, the oil and gas industry has laid 40,000 miles of offshore pipeline, a vast, aging network with little government oversight.

“What you’d like to see is that [BSEE] would be inspecting a company’s practice of how they maintain and inspect their pipelines for possible damage,” notes Frank Rusco, director of the GAO’s Natural Resources and Environment team, which authored the report. Otherwise “we don’t have a record of when that’s not happening.”

The report zeros in on roughly 8,600 miles of active offshore oil and gas lines running along the seafloor of the Gulf of Mexico, but the problem is much broader. Since the 1940s, the oil and gas industry has laid 40,000 miles of offshore pipe, a vast network that, despite its age, has been allowed to operate with little government oversight.

“The agency that is supposed to provide environmental protections is asleep at the wheel,” says Miyoko Sakashita, counsel and oceans director at the Center for Biological Diversity. “And they’re not doing adequate inspection or making sure the pipeline is safe.”

This is especially problematic given that much of the pipeline network was installed in the ’60s and ’70s. As they age, pipelines become more vulnerable to corrosion, mudslides, and seafloor erosion, all of which can lead to leaks and sometimes major spills. Older pipes are also vulnerable to extreme weather, which can drag them along the ocean floor for miles, damaging habitat and creating other hazards.

While the government’s failure to inspect is problematic enough, the GAO found that pipeline oversight is scant from beginning to end. “They’ll approve a pipeline to be built at specific standards,” Rusco says. “But typically, they won’t go and inspect while things are being built to make sure that it’s built to those standards.”

There’s also lax oversight at the end of a pipeline’s life cycle. While regulations mandate the removal of unused pipes, Rusco told me, doing so is costly, so companies often seek to “decommission” pipes instead—plugging them and leaving them on the ocean floor. Since the 1960s, the Bureau of Safety and Environmental Enforcement has approved the decommissioning of 18,000 miles of pipeline—97 percent of all inactive lines.

“BSEE had been essentially approving decommissioning pipelines, almost as the default, even though that was supposed to be an exception to their practice, which was supposed to be, when you’re dealing with a pipeline, you have to pull it out,” Rusco says.

In theory, any decommissioned lines must be emptied of oil and gas and then buried. But that aspect isn’t being monitored either, notes the report: The agency “doesn’t ensure that standards, like cleaning and burial, are met.”

Old pipelines resting on the ocean floor move around over time, Rusco adds, putting stress on the pipes and causing leaks. While some studies have suggested the environmental cost of removing spent pipeline infrastructure is greater than the risk of leaving it alone, advocates say that likely wouldn’t be so if robust precautions were taken to protect marine life.

“It’s challenging to go regularly inspect them, which probably means they shouldn’t be out there in the first place.”

“It seems that would be a more ecologically beneficial thing than to have a seabed with old oil and pipes,” says Center for Biological Diversity’s Sakashita. “I think that some of the studies may not be looking at the picture of the greater environmental impacts of leaving those in place.”

“I mean, it’s challenging to go regularly inspect them, which probably means they shouldn’t be out there in the first place,” she says.

BSEE isn’t monitoring the condition or movements of decommissioned pipeline, either, Rusco says. When deteriorating lines spring a leak and pose a risk to the safety of animals and ecosystems, according to the GAO report, “there’s no clear funding source for their removal.”

The GAO ranks oversight of pipelines among its top priority issues, citing an overall lack of adequate offshore drilling rules and regulations, and “limited progress” by BSEE despite its stated goal, in 2013, to update pipeline regulations. In September, after the report was published, the agency said it would release updated regulations in 2022—long after it acknowledged they needed a revamp. It also said it will review decommissioning rules.

More than a decade after the horrible spectacle and devastation wrought by of BP’s Deepwater Horizon spill spurred pledges for improved regulation, the ongoing crisis in Southern California highlights the dangers of having a toothless watchdog oversee an accident-prone multibillion-dollar industry.

“It stems from a history of government acting as customer service of the oil industry,” Sakashita told me. “The regulations just function to allow companies to continue business as usual.”