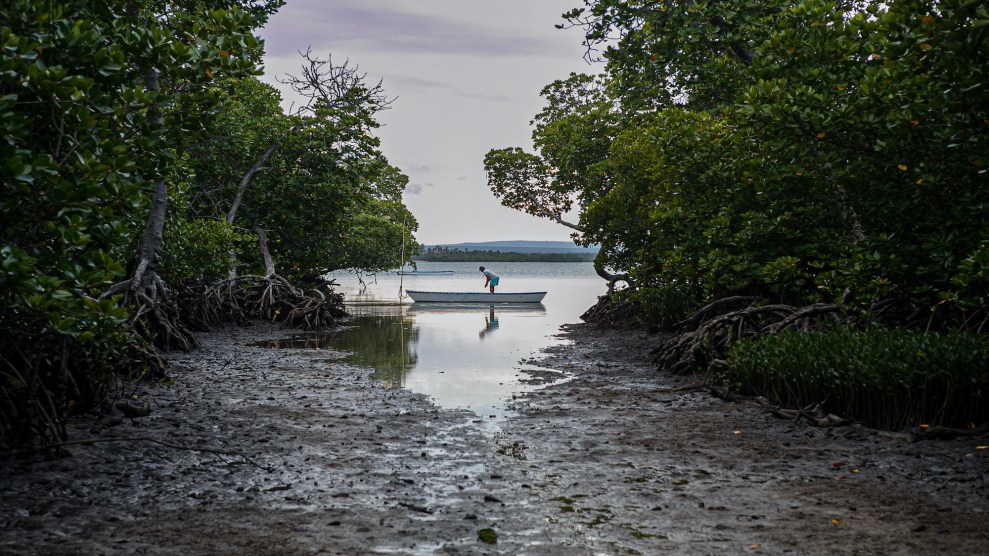 Off the Caribbean coast of Colombia, rare manatee calves have been spotted in the canals and rivers of Cispatá Bay’s mangrove forests. The once-critically endangered American crocodile is now seen more frequently. Birds and lizards nest in the branches, fish and shrimps use the roots as nurseries. These 11,000 protected hectares (27,000 acres) of mangroves are a biodiversity hotspot.

But the Cispatá conservation project, a collaboration between Colombia’s Marine and Coastal Research Institute (Invemar), Conservation International (CI) and Apple, is not just of interest to birdwatchers and ecologists. It has attracted the attention of marine scientists, researchers and corporations, as it is among the first to measure and sell a new type of credit to fund conservation: “blue carbon.”

Mangroves, like other coastal wetlands, are powerful carbon sinks. That is, they suck up carbon dioxide from the air to store in their roots and branches, as well as the sediment that collects around them. They do this so well that they can store up to 10 times more carbon than forests.

And unlike “green carbon” rainforests, which store carbon in biomass, and therefore release it when the trees die, mangroves store most of the carbon in their soil and sediment. If undisturbed, it stays there for millennia.

This superpower means “blue carbon” (the sequestration and storage of carbon by ocean ecosystems) is gaining attention in the race towards net zero. And the “big three” stores of blue carbon—mangroves, salt marshes and seagrass—are suddenly urgent new areas of conservation.

Restoring these ecosystems, scientists say, could help absorb the equivalent of up to 1.4 billion tons of emissions a year by 2050.

As much as a fifth of the emissions cuts we need to limit the global temperature rise to 1.5 C will need to come from the ocean, according to the High Level Panel for a Sustainable Ocean Economy. Protecting and restoring seagrass, mangrove and salt marsh ecosystems —which account for more than 50 percent of all carbon storage in ocean sediments—could help absorb the equivalent of as much as 1.4 billion tons of emissions a year by 2050, it says.

These ecosystems are some of the most threatened in the world by coastal development—damaged by farming, harmful fishing practices and pollution—so protecting and restoring them is expensive.

Enter the carbon-offset market. Some conservation groups are selling carbon credits to fund their work. For example, Verra, a non-profit organization based in the US that administers the world’s leading carbon-credit standard, estimates that the carbon emissions mitigated by Cispatá to be almost 1m tonnes over three decades—the equivalent of greenhouse gas emissions from the annual mileage of 214,000 cars.

María Claudia Diazgranados, a marine biologist and CI’s blue carbon director in Colombia, said: “We have been looking for a way to fund this ecosystem for years. Some 50 percent of mangroves have been lost from the Caribbean coast over the past three decades, due to cattle ranching, roads, and tourism.”

The money from selling blue carbon credits will go directly to communities to fund the Cispatá mangrove restoration. CI, which is also working with local partners and communities, hopes the credits will cover half of the project’s $600,000 operating costs. “The carbon market is not the goal, it’s the cherry on top,” says Diazgranados.

Seagrass meadows can store carbon 35 times faster than tropical forests can—and hold onto it for millennia.

The carbon-offset market remains controversial. Not all schemes are reliable. A Guardian investigation earlier this year found several carbon schemes paid for by logging firms were selling carbon credits based on keeping forests standing, thereby allowing other logging to continue.

However, for ocean scientists alarmed at the rate these ecosystems are disappearing, blue carbon could be used as leverage—to restore and conserve parts of the ocean that might not otherwise get much attention.

Seagrass meadows, for example, which can store carbon in the seabed far more quickly than tropical forests—a remarkable 35 times faster and storing it for millennia rather than decades—are disappearing at a rate of 7 percent a year. The UK alone has lost 39 percent of its seagrass meadows since the 1980s. Meanwhile, at least 1,300 square miles of mangrove forests were lost between 2000 and 2016.

At Cispatá, communities are involved in both “avoiding deforestation,” the more controversial element of the carbon-offset market, and restoration. The first stage—conserving mangroves—has already paid off: CI has persuaded farmers not to allow their water buffaloes to graze and damage the forests. The restoration stage will begin in a few months.

“It’s easier to prove sequestration of carbon if you plant mangroves than to prove avoiding deforestation if the project didn’t exist,” Diazgranados admits.

“One thing we have learned is that if you want to do conservation you need to work with local communities. We have a day-to-day presence there, a strict monitoring project, site visits and satellite-image analysis to prove the mangrove area stays the same.”

Dr Emily Pidgeon, vice-president for ocean science at CI, says Cispatá has avoided the pitfalls of other carbon-offset schemes. “We’ve learned a lot of lessons from what we have seen from terrestrial projects,” Pidgeon says, insisting that the Cispatá project has strict checks and balances, including a verified methodology to calculate the benefits to carbon emissions, communities and biodiversity. This includes regular site visits and techniques such as remote sensing.

“About 10 years ago we became aware of carbon stored in coastal wetlands and how, if you restore them, the carbon stores increase,” she says. “Back then, it was considered a harebrained scheme. But Cispatá is the first blue carbon project to be verified by Verra and we have just sold our first blue carbon credits.”

CI is already in talks with the Colombian government to expand its mangrove protection efforts to three other locations.

Dan Crockett, a blue carbon specialist at the Blue Marine Foundation, an ocean conservation charity, says the demand for blue carbon investment has taken off over the past year. “We’ve been approached by giant Norwegian shipping companies, renewable energy companies, and finance companies looking for the opportunity to invest in blue carbon.”

“There have been many breakthroughs in our understanding of oceans and the way they sequester and store carbon.”

Two reasons lie behind the demand, he says: “First, there is a global trend towards the need for nature-based solutions to the climate crisis. Second, there have been many breakthroughs in our understanding of oceans and the way they sequester and store carbon.”

Blue carbon mangrove projects are in development or under way in Kenya, Senegal, Madagascar, Vietnam and the Sunderbans in India. Each aims to reduce emissions by hundreds of thousands of tons of CO2 a year.

By far the largest mangrove restoration project so far—nearly 25 times bigger than Cispatá—is the Indus delta project, on the Arabian Sea in Pakistan. The Sindh regional government, working with the developer Indus Delta Capital, is planning to protect and restore mangroves over about 350,000 hectares.

Steve Crooks, of Silvestrum Climate Associates, a coastal geomorphologist who developed the methodology for the blue carbon finance scheme, says the Indus project aims to absorb the equivalent of 2m tonnes of CO2 every year and to sell 1m credits in 2021, increasing to 30m credits over the next 10 years.

Blue carbon is a triple win, he says. “They are a hot commodity right now, mostly to big industry. It’s a very promising time—for conservation financing, for restoration of these important ecosystems, and to help these countries who are missing important targets.”