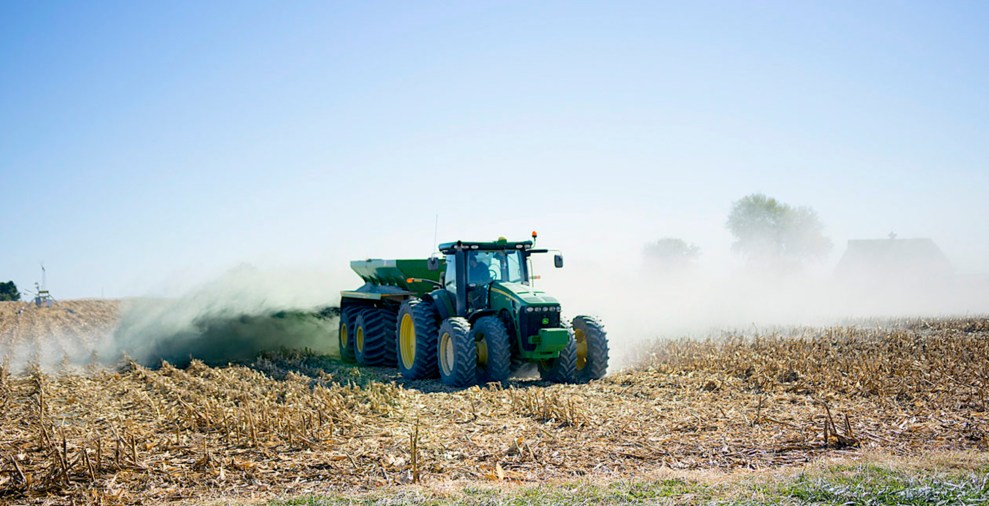 This story was originally published by Yale E360 and is reproduced here as part of the Climate Desk collaboration.

On a hot and humid August day near Geneva, New York, Garrett Boudinot stands in a field of hemp, the green stalks towering a foot or more over his 6-foot, 4-inch frame. Today, the mustached Cornell University research assistant will harvest six acres of the crop, weigh it in red plastic garbage bins, and continue to analyze the hundreds of water samples taken with measuring devices called lysimeters that have been buried in the field over the last three months.

Boudinot, part of a research team at Cornell University, will sweat through the next two days of field work to see whether an unusual component added to the soil earlier in the year helped increase yields and sequester carbon. This soil amendment “we just call lovingly ‘rock dust,’ which isn’t very descriptive,” says Boudinot. “But it’s really silicate rocks that have been pulverized to a fine powder.”

The hemp field trial is just one of the projects being led by Ben Houlton, dean of Cornell’s College of Agriculture and Life Sciences. For the last two years, he and colleagues at the Working Lands Innovation Center, a research consortium based at the University of California, Davis, have been testing various soil amendments that grab carbon from the air and trap it below ground. They’ve tested biochar, manure, and rock dust used on the New York land and California farm plots, and so far, the most effective soil treatment is basalt pulverized into dust.

“As far as I can tell,” says Houlton, “ours is the largest-scale project of its kind, using this intensive sort of scientific approach.”

The hemp field experiments go beyond testing which amendments increase yields and sequester carbon and examine how much rock dust should be applied for best results. Some sections got 20 tons of rock dust per acre, while others got 40, allowing the researchers to get a more fine-tuned picture of the relationship between the dust, the soil, and the crops. The research adds to a growing body of scientific work showing the potential for these soil amendments to become one of the many measures needed to help solve our climate crisis.

Agriculture accounts for nearly a quarter of the world’s carbon dioxide emissions.

Agriculture accounts for nearly a quarter of the world’s carbon dioxide emissions, making the farming sector an important part of efforts to reach net zero by 2050 and limit global warming to 1.5 degrees Celsius, an increase scientists warn the world should not surpass if we want to avert some of the more drastic consequences of climate change. To help reduce carbon in the atmosphere, scientists once proposed seeding the oceans with iron. That tactic was criticized as environmentally damaging and ineffective and has not gained widespread acceptance. But seeding soils with carbon-capturing rock dust could.

In addition to Houlton, scientists from the United Kingdom to Canada are testing various soil amendments on agricultural lands, assessing how much carbon they sequester through a process called enhanced weathering. While Houlton’s researchers apply basalt to hemp in New York and to alfalfa and olive trees in California, scientists working with the University of Sheffield’s Leverhulme Centre for Climate Change Mitigation in the U.K. are spreading basalt on cornfields in Illinois and on sugarcane in Australia. In Ontario, Canada, researchers are applying wollastonite from a nearby mine on soybean and alfalfa fields.

According to the U.N. Intergovernmental Panel on Climate Change (IPCC), rocks naturally remove 1 gigaton (1 billion tons) of carbon dioxide a year from the atmosphere (a number that has changed over time). Adding rock dust to agricultural lands speeds up the chemical reactions that lock carbon up—for thousands of years—in soil. If applied to croplands globally, rock dust could theoretically help suck an estimated 2 to 4 billion tons of carbon dioxide from the air every year, between 34 and 68 percent of the global greenhouse gas emissions produced by agriculture annually. And though treating so much land might be unrealistic, the process has the potential to scale up quickly because rock dust isn’t in short supply and farmers don’t need to purchase new gear to apply it: They’ve already got fertilizer-spreading equipment in their barns.

“This is an incredibly exciting technology that has a lot of wins for society and, frankly, we could deploy this very quickly,” says Houlton.

Basalt, the additive being used in the Cornell project, is a byproduct of mining and manufacturing operations and is found all over the world. Some estimates show that there’s enough basalt rock dust stockpiled to treat the planet’s croplands for several years.

“Rock extraction is one of the largest things we do as a species,” says Phil Renforth, an engineer at Heriot-Watt University in Edinburgh, who works on carbon capture. “By mass we do more than twice as much rock extraction as we do food production.”

Carbonates can hang around in water for thousands of years—and stay on the seafloor for millions.

Basalt contains magnesium, calcium, and silica, among other components. When the rock is pulverized and applied to soils, magnesium and calcium are released from the silica and dissolve in water as it moves through the soil. The minerals in the soil react with the water and carbon that would otherwise go back into the atmosphere, forming bicarbonates, which can hang around in water for thousands of years, eventually making their way to the oceans where they can precipitate out as limestone and stay on the seafloor for millions of years.

Different amendments result in slightly different chemical reactions in the soils, and the soils provide various conditions, such as different pHs. Some amendments, like wollastonite, may be better at sequestering carbon but aren’t as abundant. Others may contain heavy metals, which can harm crops and groundwater. “There’s the chemistry of the rock; there’s the availability of the rock; and then there’s the carbon benefits of the material, as well as the potential for what I would call ‘negative consequences’ to emerge,” says Houlton.

The varied lands on which crops are grown require a number of field trials to assess how much more carbon stays in the soil, but the results are encouraging. On plots in California, initial results show a doubling of carbon uptake. That’s surprising, says Houlton, considering that the crops were grown under the driest conditions in the state’s history.

Leverhulme Centre director David Beerling, who is five years into a decade-long effort to investigate enhanced weathering on croplands, published a paper last year in Nature that demonstrated the potential of the method. He and colleagues found that if China, India, and the United States applied rock dust to all of their agricultural lands, 1 billion tons of carbon dioxide could be removed from the atmosphere.

The research results so far are significant enough that the IPCC mentioned enhanced weathering in its most recent report, listing the method of spreading ground-up rocks on soils as a way to capture more carbon and stimulate cropland productivity.

But scientists are still weighing the costs and benefits of such applications, including the expense of transporting the material and better calculating the carbon storage and crop yield benefits. Researchers may have more data to draw on soon: Results of much larger trials by Houlton and Beerling could be published as soon as next year.

Field tests on corn and alfalfa also show increases in crop yields thanks to the rock dust.

Rock dust applications could benefit more than just the climate—they could help farmers, too. Field tests on corn and alfalfa show increases in crop yields thanks to rock dust, which releases other essential nutrients like phosphorous and potassium. In some cases, yields are 30 percent higher, results that could entice farmers looking to decrease inputs while increasing harvest. Initial weight measurements show potentially higher yields on the hemp fields in New York as well.

The rock dust may also affect the nitrogen cycle, Beerling points out, ultimately allowing farmers to apply less nitrogen fertilizer. That could lead to fewer nutrient pollution issues, especially in Corn Belt states where runoff drains into the Mississippi watershed and down into the Gulf of Mexico. Beerling and researchers are currently working on a map of available basalt and crops on which it could be applied in 13 states in the Midwest.

Reducing atmospheric carbon doesn’t yet provide an income stream to farmers, although incentivizing “carbon farming” has been floated by the Biden administration. Both Houlton and Beerling are looking to quantify exactly how much carbon a crop can capture so that if a market does come to fruition, farmers could be paid for the amount of carbon they sequester.

To accomplish that, Boudinot is looking at the soil water chemistry from the hemp fields to see how much bicarbonate formed at a foot below the surface. That data, along with information from the experimental plots in California and results from the first five years of research led by the Leverhulme Centre, could provide critical evidence for the farming community.

“What do you think of a carbon dioxide removal technology that reuses waste rock dust, captures carbon, improves soils, restore soils, and improves yields?” asks Beerling. “It’s a no-brainer, at least in the short term, if you’ve got this material and the evidence stacks up. Why wouldn’t you do it?”

This story was produced in collaboration with the Food & Environment Reporting Network, a nonprofit investigative news organization.