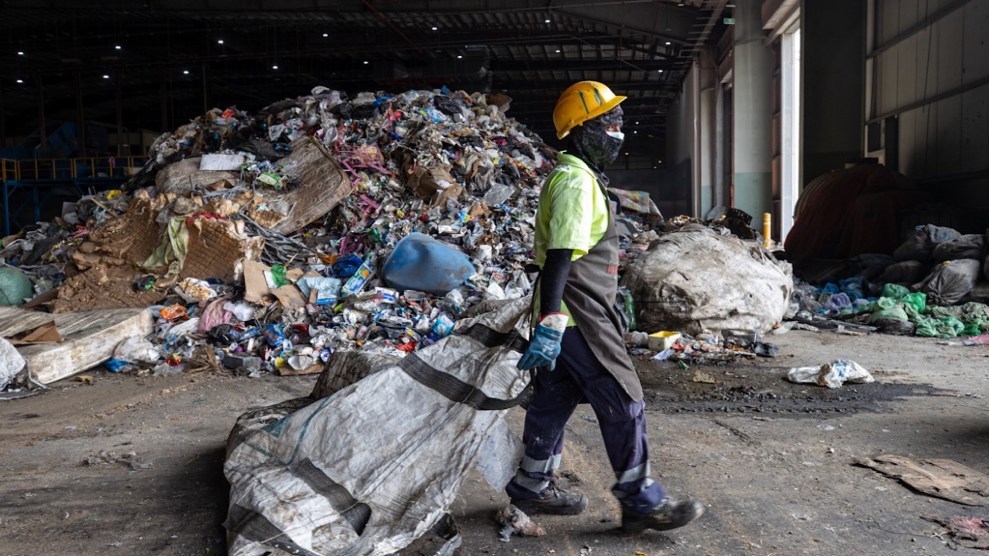 Plastics are everywhere. From the stomachs of deep-sea fish to human feces, Arctic snow to gusts of wind in the remote wilderness, the oil and gas byproduct has, barely a century after it was first synthesized in a laboratory, become a ubiquitous feature of virtually every ecosystem on Earth and every aspect of modern life.

It’s also playing a key role in permanently changing the climate of the planet it has come to dominate.

Plastics already produce 3.8 percent of the world’s greenhouse gas emissions throughout their lifecycle, roughly double the planet-heating pollution spewed by airplanes. By the end of this decade, the plastics industry in the United States alone is on pace to eclipse the carbon footprint of the country’s remaining coal-fired power plants, according to a new analysis from Bennington College’s Beyond Plastics think tank.

Roughly 65 percent of the country’s active coal-fired plants retired over the past decade, yet the stupendous growth of the U.S. plastics industry threatens to offset whatever climate progress the world’s largest historical emitter has made at a moment when the nation is struggling to codify its transition from fossil fuels into law.

In 2020, despite the pandemic, plastics emissions increased by 10 million tons over the previous year.

While emissions from power plants, transportation, and industry are expected to take center stage at next month’s United Nations climate summit in Scotland, plastics are virtually absent from the global climate agenda. And despite attention paid to the crisis of plastic trash piling up on buildings and killing aquatic wildlife, the Biden administration’s proposal to decarbonize the U.S. economy similarly overlooks the industry’s carbon footprint.

“When most people think of the plastic problem, they think of water pollution and the fact that plastic recycling has been such a failure. They don’t think about climate change,” said Judith Enck, the president of Beyond Plastics who previously spent eight years as a regional administrator at the Environmental Protection Agency. “But this is a significant and growing source of greenhouse gas emissions.”

Across the country, particularly in states where hydraulic fracturing, or fracking, has made the fossil fuel raw materials for plastics production cheap and readily available, the industry and its emissions have grown rapidly. In 2020, plastics emissions increased by 10 million tons compared to the previous year, even as the world’s output of climate-changing gases overall temporarily decreased as the pandemic lockdowns idled cars and factories.

Another 12 plastics facilities are currently under construction, with 15 more in the works, likely adding another 40 million tons of greenhouse gas pollution each year by 2025.

Heat-trapping carbon is hardly the only pollutant these plants spew. Air pollution near cracker plants ― the type of facility where gas is heated to a high enough temperature to break the fuels into smaller molecules, a main feedstock, or baseline ingredient, for plastics ― contains more than 100 chemicals including cancer-causing benzene, toluene and xylene. Communities in which these facilities are built experience such disproportionate rates of lung cancer, asthma and organ diseases that Louisiana’s infamously dense petrochemical corridor is known internationally as “Cancer Alley.”

More than 90 percent of the carbon emissions the plastics industry reports to the Environmental Protection Agency pollutes just 18 communities, primarily along the coasts of Louisiana and Texas, the report found. Residents there are more likely to be poor and nonwhite. Those living within three miles of these petrochemical clusters earn 28 percent less than the average U.S. household and are 67 percent more likely to be people of color, according to the report.

To conduct the research, Beyond Plastics enlisted the Maine-based environmental research firm Material Research to collect the public emissions data plastics companies submit to the EPA, the Department of Commerce and the Department of Energy. The industry-reported data showed 114 million tons of greenhouse gases in 2020 alone.

But that offered only a narrow view of plastics’ carbon footprint. After collating the regulatory data, researchers then calculated emissions from plastic imports and exports and pipelines carrying the feedstock fuels. By doing so, they identified another 118 million tons of greenhouse gas pollution just last year.

In reality, the actual number is likely even higher. That estimate does not include, for example, gases that plastic waste deteriorating in the ocean releases. Sarah-Jeanne Royer, a research scientist at Hawai’i Pacific University’s Center for Marine Debris Research who has studied emissions from plastics, said public understanding of how quickly plastics deteriorate and emit gases has not yet caught up to recent findings.

Of the 35 chemical recycling projects the EPA assessed last December, just six were operating at commercial or demonstration scale.

“Whether it’s plastic pollution or plastic that is basically in use, it will be producing different types of greenhouse gases,” said Royer, who was not involved in the report but reviewed its findings for HuffPost. “We very often think about emissions from the production process or maybe from the end-of-life recycling facilities. But we don’t yet have a number for the total amount for when plastic is exposed in the environment.”

Adding to that crisis, she said, is the fact that as plastic waste breaks apart in the ocean or in landfills, it expands the exposed surface area and increases emissions from each piece of trash over time. “If anything,” she said of the Beyond Plastics report, “this is an underestimate.”

Among the more worrying trends the report documents is the rise of a nascent sector known as chemical recycling. Sometimes called “advanced recycling,” the process involves melting solid plastics down in high-heat furnaces. The resulting liquid feedstocks―rather than becoming new plastics, as the term “recycling” implies―are, in many cases, sold as fuel oil.

The chemical recycling industry, though still emerging, is littered with failures, including the collapse of projects across three continents, a Reuters investigation published in July found. Of the 35 chemical recycling projects the EPA assessed last December, just six were operating at commercial or demonstration scale, while several ended in lawsuits and settlements for unpaid services and two resulted in the chief executives facing multi-million-dollar fraud judgements.

Still, states across the country are enacting legislation to spur the industry on by exempting chemical recycling plants from local environmental regulations. If all the country’s proposed chemical recyclers are built, the plants and the burning of their resulting fuel could emit another 18 million tons of greenhouse gases per year, the Beyond Plastics report found.

“Plastics produce a massive amount of greenhouse gas emissions throughout the life cycle, while they are barely noticed by the public.”

“I am not surprised by the main conclusions,” said Sangwon Suh, an industrial ecologist at the University of California, Santa Barbara’s Bren School of Environmental Science and Management, who was not involved in the report but reviewed an advanced copy for HuffPost. “Plastics produce a massive amount of greenhouse gas emissions throughout the life cycle, while they are barely noticed by the public as their emissions tend to be hidden behind the supply chain.”

He cautioned that coal, too, emits more carbon through its life cycle than most figures that cite the pollution it produces when burned reveal. But unlike coal, which scientists say needs to be phased out in the next decade or so to keep global warming from reaching catastrophic levels, “net-zero greenhouse gas emission plastics is possible at a global scale” if producers actually recycle material, use plant matter as a feedstock, and equip facilities with carbon capture technology, Suh said, pointing to a study he co-authored and published in the journal Science this month.

The plastics industry’s waste and climate impact are hardly the only social problems that should invite government scrutiny. Plastic prices are soaring, with polypropylene, a main ingredient in most plastics, skyrocketing 135 percent over the course of 2021, according to a separate report published this week by the Institute for Energy Economics and Financial Analysis. The analysis concluded that the industry requires more pricing oversight of the companies that produce most feedstocks, particularly the oil and gas giants that have increasingly relied on their plastics divisions to compensate for declining profits from drilling.