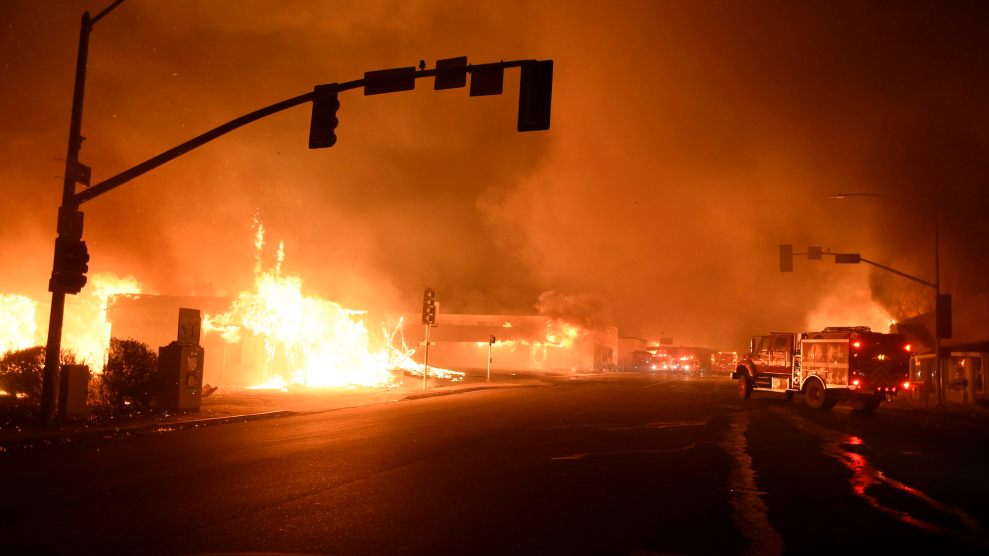 The Camp Fire in Paradise, California in 2018.Neal Waters, ZUMA

Rather than take the chance that its downed power lines would spark another blaze like last year’s Camp Fire, Pacific Gas and Electric (PG&E), the largest utility in California, shut off the power for more than 600,000 of its 16 million customers this week.

Climate change has helped wildfires spread far and wide and lengthened the season for burning, something PG&E already knows well. Earlier this year, after the damages of the Camp Fire, PG&E filed for bankruptcy, a move the Wall Street Journal called “the first major corporate casualty of climate change.” The Journal noted: “PG&E has long accepted the science of climate change. It is one of several California utilities that, with prodding from state politicians, has been rapidly shifting to a cleaner energy future.”

This past year, Edison Electric Institute lobbied on PG&E’s behalf, claiming that it is the state’s responsibility (not the utility’s) to prevent “a future in which electric service is subject to frequent interruption during wildfire season.”

PG&E draws far more of its power from renewable energy sources such as hydro, and nuclear than its coal-reliant counterparts. But the utility played a part in propping up climate change denial in the early, pivotal days when the public first learned of the threat. PG&E helped to sow confusion around climate change as an early member of the Global Climate Coalition, which led the successful campaign to stall regulation of greenhouse gas pollution.

Working from 1989 to 2002, the Global Climate Coalition represented coal, oil, automakers, manufacturers, and utilities that all had a stake in maintaining the status quo. A year before the coalition formed, climate scientist James Hansen raised the alarm in testimony to Congress that heat-trapping pollution released by burning fossil fuels was warming the planet. The coalition promoted a small group of scientists whose work helped to plant just enough doubt to justify delay in action to reduce pollution.

The coalition’s members also testified about the supposed uncertainty of global warming before Congress. During the years PG&E was listed as a member, National Association of Manufacturers’ Jerry Jasinowski testified, “There’s nothing in here that leads us to conclude, our scientists nor myself, that there is sufficient evidence to be certain about the benefits of reducing carbon dioxide in a satisfactory way.” In 1991, the Global Climate Coalition submitted a statement called “A Reasoned Approach To Global Warming” that put it even more bluntly: “There is still substantial uncertainty about the very existence of human-induced global warming.”

According to documents collected by the Climate Investigations Center, PG&E was a member of the coalition in 1989, 1990, and 1991. After that, PG&E appears to have split from the group.

Yet by then utility companies were already aware that the carbon pollution they unleashed by burning coal was heating up the planet. The utility watchdog Energy and Policy Institute traced the sector’s awareness of climate change back to at least 1968, according to its report from 2017:

Long forgotten and overlooked documents reviewed for this report reveal that by 1968, scientists had begun to directly warn the electric utility industry about the possibly catastrophic effects that carbon dioxide emissions from burning fossil fuels could one day have on the Earth and its climate. Scientific understanding of climate change then was more limited compared to what we know today, but by 1971 electric utilities knew enough to include a modest budget for research into the climatological “effects of CO2” and other power plant emissions in the industry’s long-term national research and development goals for through the year 2000.

The broader utility sector’s work in promoting skepticism around climate change continued, often through the trade group Edison Electric Institute that represents investor-owned utilities. (PG&E is still a member). Edison Electric Institute’s work today is far more subtle than the early days. In this 1991 ad, for example, it compared concern over warming to “Chicken Little’s hysteria.” This past year, Edison Electric Institute lobbied California on PG&E’s behalf, claiming that it is the state’s responsibility (not the utility’s) to prevent “a future in which electric service is subject to frequent interruption during wildfire season (which may become nearly year-round with climate change).”

PG&E has long since acknowledged the reality of climate change, and is one of the most aggressively invested utilities in renewable energy in the country. Meanwhile, courts are still deciding whether companies might be held legally and financially responsible if they burned fossil fuels despite knowing the risks.

“Major utilities companies, like oil and gas and coal, were on notice about the risk of fossil fuel combustion for decades,” says Caroll Muffett, the president of the Center for International Environmental Law. “If these companies were aware of the risks of those activities, that history becomes a relevant legal part of their future.”