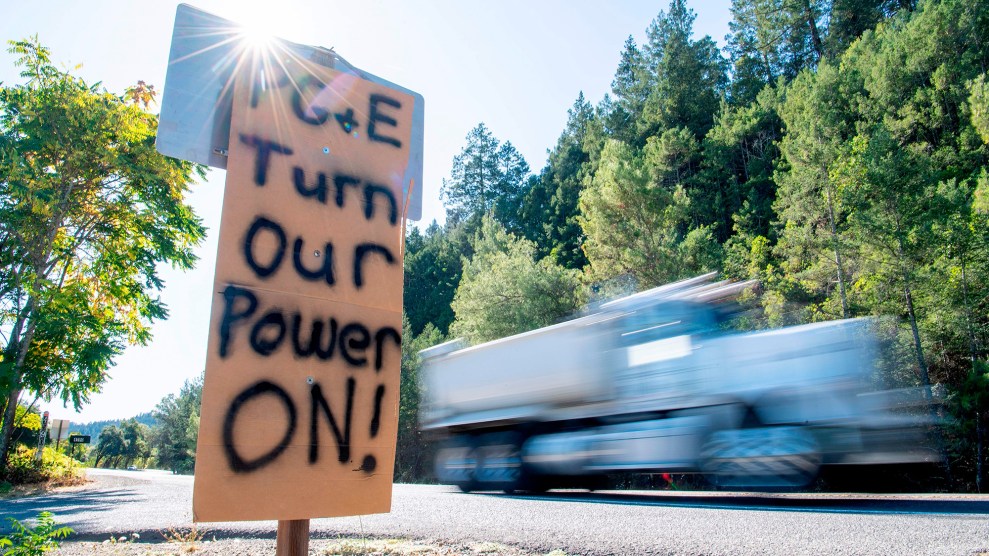 In Merritt College’s parking lot, high up in the hills of Oakland, California, the big white tent is supposed to serve as an “community resource center” for PG&E customers that have been left without power since last night. The reality is that it’s mostly just a charging station with water and WiFi. About a dozen people idle at the folding tables Thursday morning. And while it’s chilly and windy, people are mostly calm and friendly, resigned to make the best of their predicament. As strong, cold gusts pick up throughout the morning, the tent flaps loudly, straining the sandbags holding it down.

“I am rethinking how are going to adjust.”

Walter Johnson, 76, is one of the first people there, arriving just after 9 am. He came to charge his phone and laptop. A co-worker had warned him about the outages, so he’s stocked with ice and snacks at home. He felt there was nothing to do but wait it out. “I prepared myself mentally,” he says. “I was just waiting for the other shoe to drop.”

Johnson is one of more than a million people who lost power beginning early Wednesday morning, when PG&E started progressively shutting down power to customers in Northern and Central California to avoid potential wildfires brought on by hot, dry, and windy conditions. The utility company set up resource centers in 26 counties in the region to offer the basics, like bathrooms, chargers, water, and WiFi. Around here, visitors, who for the most part live in Oakland, lost power around 10 pm Wednesday night.

The tent isn’t huge—there’s just enough room for about 15 tables and chairs. So it’s a little cramped, but sparse, save for a few posters and folding sidewalk signs displaying rules and a code of conduct. Staff, pulled from PG&E’s customer care division, stay by the tent’s entrance, answering questions and handing out water; one staffer offers a woman, who is in shorts, a sweatshirt to stay warm.

Joanie S., 57, comes in just before 10 am and asks the three workers staffing the center how long the outage is going to last. They can’t give her a firm answer, though they are hopeful that some power will be restored Thursday. They offer her water. “What else can I get?” she asks. “I’m just being honest.” She wants a case of water, but they settle on five bottles, and a woman from PG&E helps her bring them to her car parked outside.

“I’m frustrated. I’m angry,” Joanie, who lives in the Oakland hills, tells me in the parking lot. “What are we learning from this? Because this is crazy.” She doesn’t completely trust PG&E’s stated reasons for shutting off the electricity, hinting it might have something to due with the financial losses it’s incurred due to fires and litigation. The company declared bankruptcy in January after its role in sparking recent wildfires led to lawsuits and major payouts.

If this is the new normal, “they have to figure out a better system ultimately.”

“I would like to see more communication about restoring the power,” she says. She received a text message from PG&E warning ahead of time about the shutoff, but hasn’t gotten direct updates since. On Monday, she had gone to Target to stock up in preparation. “The shelves were bare,” she says. She got a battery pack and a crank radio and went to check on her parents who she cares for and who are in their 80s. When the power went out Wednesday night, it was pitch black in her neighborhood. She works at night and she’s concerned about driving safely in the dark tonight. Power outages have led to multiple car accidents in the North Bay at intersections without traffic signals.

Ultimately, though, she’s trying to come to peace with the situation. “I’m looking to tweak some habits,” she says. “You don’t realize how dependent you are on all these devices.”

Martin Vance, 39, is here because his classes at the University of California, Berkeley, were cancelled for the second day in a row. He lives in Oakland’s Diamond District, and his power went out at 11 pm last night. He’s frustrated about a lack of communication, too. First his power was supposed to be turned off at noon on Wednesday, and then 8 pm, and then later. Official reports say the outages could last several hours or even several days for some areas—though he knows nothing more specific than that. “You can’t get a clear sense,” Vance says. “The whole day I was waiting.” He’s in the middle of midterms but spent time driving around with his girlfriend buying flashlights and food and water for a week. If this is the new normal, “they have to figure out a better system ultimately,” he says.

He’s right, these situations could become more and more frequent as climate change progresses. The fire season in California is already longer than before, and officials are scrambling to figure out how to avoid the disastrous fires that have happened in the past few years. Still, a lot of people at the resource center don’t understand why the power is out when wind isn’t high in their neighborhoods. Because PG&E covers such a large territory—it’s the one of the biggest energy companies in the United States—electricity to one area might be coming from a completely different region with worse weather conditions. That’s why more people have been talking about localized power and micro-grids as possible solutions to the problem.

All her appliances are electric though, so she has resorted to cold showers, and as for the food in her fridge and freezer, “I said we’re going to have a warm beer and shrimp barbecue.”

Elisa Sconza, 30, an EMT at the Oakland Zoo, helps another woman order a battery pack she recommends online. Sconza tells me the Oakland Zoo remains closed. Some zookeepers were scrambling to keep everything running. Exhibits that require special support like water filtration systems are being powered by generators, but the animals are doing okay. Sconza has three battery packs with her, including one that doubles as a lantern. All her appliances are electric though, so she has resorted to cold showers, and as for the food in her fridge and freezer, “I said we’re going to have a warm beer and shrimp barbecue.”

Many people aren’t as well prepared. Dorothy Cole, 81, and her daughter Jana Cole, 57, laugh when I ask them about their preparations. “I never thought about anything like this,” Dorothy says. Their garage door is stuck, and they’ve had trouble communicating with choppy cell service and no access to WiFi. “Everything’s so interconnected,” she says. It’s a little stressful because Dorothy’s 10-year-old granddaughter is staying with them for a week. She has allergies, so they have to be careful with what canned food they’re buying. When they lost power, they charged their phones in the car, but then needed to get more gas. They aren’t alone. At gas stations around California, lines have been snaking around parking lots as people wait to refill. “For the first time I’m thinking about getting a generator,” Jana says. With climate change, she’s wondering about solar power and other backup. “I am rethinking how are we going to adjust.”