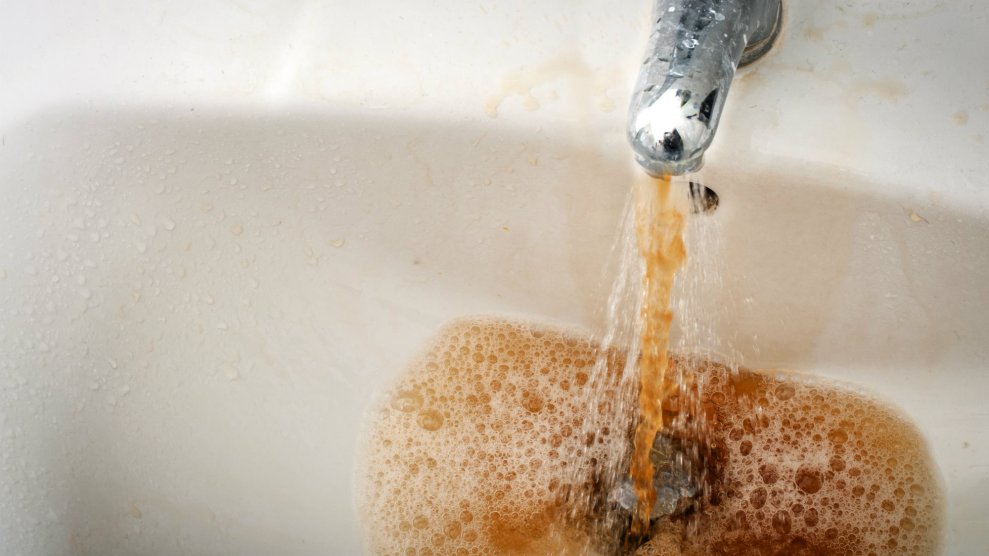 A few months after the water was officially declared to be safe, a new federal lawsuit is alleging that inmates at the Genesee County jail in Flint, Michigan, were forced to drink contaminated water during the city’s water crisis, because jail officials believed that the inmates didn’t deserve clean drinking water.

Over 90 plaintiffs, who are being represented by three lawyers, have filed suit against Genesee County Sheriff Robert Pickell and Jason Gould, the jail administrator. “Pickell and Gould subjected Plaintiffs to a special danger as distinguished from the public at large,” the plaintiffs’ lawyers wrote in the suit. “With full knowledge that the water in the Genesee County Jail was contaminated, Defendants Pickell and Gould forced Plaintiffs to continue drinking the contaminated water.”

The sheriff has yet to comment on the substance of the lawsuit, but he told the Detroit Free Press that “just because it’s being alleged, doesn’t make it true.”

The problems in Flint began in 2014, when emergency manager Darnell Earley oversaw the decision to switch the city’s water source from Lake Huron to the Flint River, in order to cut costs. Residents quickly noticed a difference. Because many homes were fitted with lead plumbing, improperly treated river water leached lead off the pipes and into taps across the city. There is no known safe level of lead, and lead poisoning can lead to developmental issues for children and damage to kidneys and nervous systems for adults.

After more than a year of denials from city and state officials, the water was switched back but the damage had already been done. At least 12 people died from a Legionnaires’ disease outbreak that was linked to the toxic water, and thousands of children had elevated lead levels in their systems.

The lawsuit alleges that even after jail officials were aware that the water should not be consumed, Pickell and Gould “forced Plaintiffs to continue drinking the contaminated water.” Many of the inmates named in the suit say that family and friends tried to have water delivered to them, but jail staff did not allow them to receive it—forcing some inmates, including pregnant women, to drink contaminated tap water at the facility. A 2017 West Virginia University and Kansas University study found that the water crisis caused an increase in fetal deaths and miscarriages in Flint.

There have been no studies examining the effect of the drinking water on those who had been incarcerated during that time, but the suit claims that “plaintiffs suffered severe and permanent injuries” during that time. Some of the injuries listed in the suit include hair, skin, digestive, and organ problems, and the aggravation of preexisting conditions.

The plaintiffs are also alleging that they were tricked into drinking contaminated water, when jail officials told them that the water had been switched back to Lake Huron—one year before that was actually true. “Pickell and Gould knowingly permitted their employees and/or agents to lie to Genesee County Jail inmates to convince them to drink contaminated water,” lawyers said in the filing.

Eventually, the state and county began delivering clean water to the jail, but the lawsuit alleges that Pickell and Gould “arbitrarily and inhumanely” allowed inmates only two half-liter bottles of water a day, markedly less than the 2.7 liters for women and 3.7 liters for men that the Mayo Clinic recommends. According to the lawsuit, inmates were eventually allowed to purchase water at the commissary, but those who were unable to afford it had no option but to continue drinking water they knew was unhealthy.

Today, local officials say the water is safe to drink, but many residents throughout the city still don’t trust what is coming out of their taps.

The inmates allege that the denial of water and the subsequent injuries caused are in violation of their civil rights and the Eighth Amendment, which prohibits cruel and unusual punishment. Conrad Benedetto, one of the attorneys on the case, says the lawyers filed this lawsuit in order to “hold the defendants accountable for their conduct and to remind them that they are not above the law.”