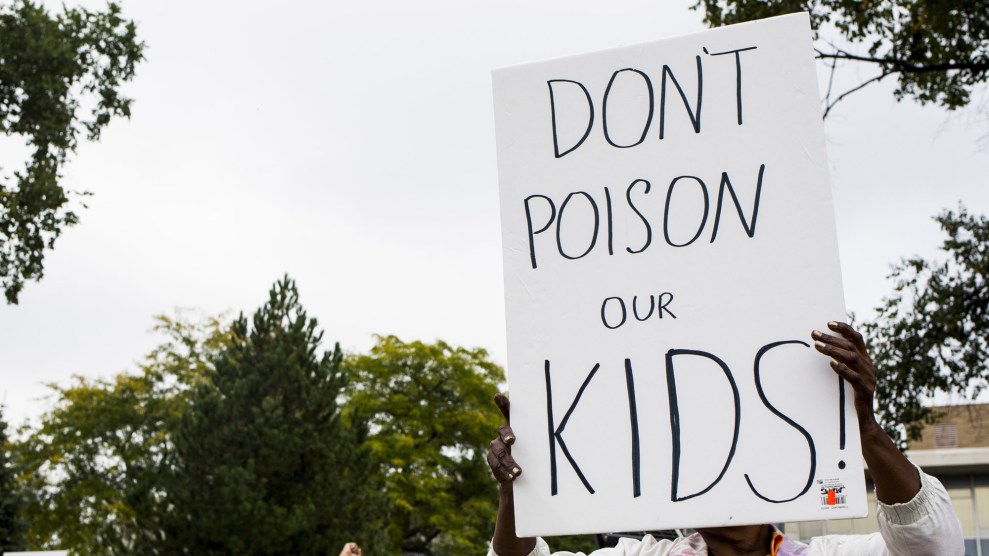 In Michigan, involuntary manslaughter carries a possible prison sentence of up to 15 years.

Lyon is the highest-ranking official in Michigan Gov. Rick Snyder’s (R) administration to be charged with a crime. In addition, the state’s chief medical officer, Dr. Eden Wells, was charged with obstruction of justice “related to an alleged attempt to stop an investigation into the health crisis in Flint and later misleading investigators as to her actions,” according to a press release from Schuette’s office. Before Wednesday’s charges were announced, other criminal charges had already been filed against 13 state and local officials, including Earley and Croft.

In charging documents, Schuette accused Lyon and the other defendants charged with involuntary manslaughter of causing 2015 the death of Robert Skidmore, after failing to alert the public to the deadly outbreak of Legionnaires’ Disease, which is believed to have been caused by Flint’s contaminated water.

In 2014, emergency city managers appointed by Snyder switched the city’s water source to the Flint River in order to cut costs. Because it had not been treated properly, river water began leaching lead from old lead pipes in residential homes across the city. Almost immediately, residents began complaining about the smell and the rashes it gave them from bathing in it. Doctors reported elevated lead levels in Flint children; lead poisoning can lead to a number of health problems, including learning disabilities.

Experts also concluded that an outbreak of Legionnaires’ Disease, an illness caused by a type of bacteria found in contaminated water systems, was likely linked to the city water supply. Symptoms include shortness of breath, headache, and fever. People over the age of 50 or people with chronic lung disease are at an increased risk of getting sick.

Between June 2014 and November 2015, at least 87 residents of Genesee County, which includes Flint, contracted Legionnaires’ Disease. Only 6-13 cases were reported between 2009 to 2013. In 2016, Lyon said that not all the cases were linked to the water crisis, because not every patient was exposed to Flint water.

At least 12 people have died from the disease since 2014 in Genessee County.

Update, 2:02 p.m.: In a statement Gov. Rick Snyder said he remained confident in the defendants:

Nick Lyon has been a strong leader at the Department of Health and Human Services for the past several years and remains completely committed to Flint’s recovery. Director Lyon and Dr. Eden Wells, like every other person who has been charged with a crime by Bill Schuette, are presumed innocent unless and until proven guilty beyond a reasonable doubt.

Some state employees were charged over a year ago and have been suspended from work since that time. They still have not had their day in court. That is not justice for Flint nor for those who have been charged. Director Lyon and Dr. Wells have been and continue to be instrumental in Flint’s recovery. They have my full faith and confidence, and will remain on duty at DHHS.

The new charge announced today against Mr. Earley is extremely disappointing, false, and excessive. The events it is connected with occurred 11 months after Mr. Earley left the Emergency Manager position in Flint. While the death of Mr. Skidmore is tragic, Mr. Earley was in no way responsible for his death. To be sure, the charges brought against Mr. Earley are completely misguided and cannot be substantiated by the government. As we have contended all along, we will continue to vigorously defend Mr. Earley, his actions and his reputation, and remain confident that he will be eventually vindicated.