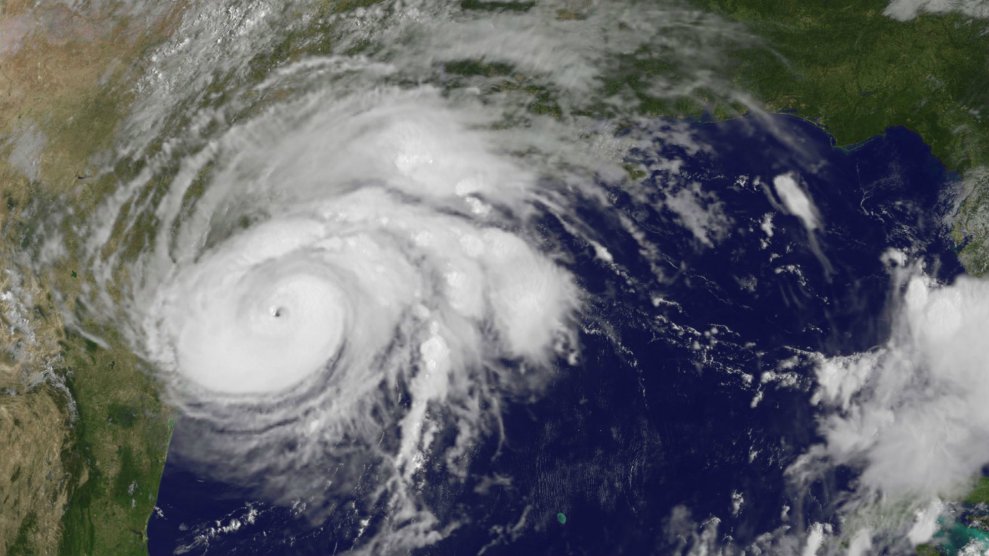 There’s a good reason why Mashable’s Andrew Freedman dubbed Hurricane Harvey—now barreling toward Texas and Louisiana—“the meteorological equivalent of a White Walker from Game of Thrones.” The storm was alive, but then appeared to die as it hovered over the Yucatan Peninsula earlier this week. Over the past two days, however, it has spawned from the dead, emerging even more powerful than it was before. Hurricane Harvey is coming, and those in its path have had little time to prepare.

There are also good reasons why everyone is talking about this storm (except, of course, President Trump, who until Thursday afternoon was busy tweeting memes). The first is obvious: Harvey is likely to be the first major hurricane to make landfall in the United States since 2005. But the second is more complicated. According to Texas State Climatologist John Nielsen-Gammon, hurricanes usually come with only one of two awful characteristics—either heavy, persistent rainfall or strong, violent winds and storm surge. It looks like Hurricane Harvey could have both, because unique wind patterns may prevent the storm from moving quickly out of the region.

As for Harvey’s intensity, the hurricane is now at Category 1—the lowest category. But, according to the Weather Channel, “With a favorable environment that includes deep, warm Gulf of Mexico water, and low wind shear, Harvey will continue to strengthen rapidly, and could be a Category 3 hurricane at landfall along the Texas coast overnight Friday night or early Saturday morning.” And rainfall looks like it could produce truly unprecedented flooding, as meteorologist Eric Holthaus has pointed out:

In response, Texas has issued disaster declarations for 30 counties and urged thousands of residents to evacuate their homes.

That’s pretty scary, but what’s even more unsettling is that the government may not be prepared to deal with the effects of the storm. President Trump’s reaction to Harvey has so far been underwhelming. White House Press Secretary Sarah Huckabee Sanders addressed the storm in Thursday’s press briefing, saying Trump was “aware” of it, “has been briefed and will continue to be updated as the storm progresses.” Later in the day, the president himself tweeted a somber call to action, urging people to “plan ahead.”

The irony here is that while Trump urges residents in the path of the storm to prepare themselves, he has failed to follow his own advice. He is greeting this storm without key administrators in place. This could very likely be the first major natural disaster of Trump’s presidency, and with agencies like the Department of Homeland Security, NOAA, and NASA still without leaders more than seven months into the presidency, the least he could do is offer some reassurance that he is moving quickly to fill those positions. As former American Meteorological Society president Marshall Shepherd wrote for Forbes in April, there is a “strong working relationship between the weather community and emergency managers” during disasters. And while Trump’s FEMA administrator has extensive experience in emergency management and the other agencies have interim chiefs, “strong and decisive leadership is always vital when our nation faces tragedies,” Shepherd wrote.

Trump will be handling this crisis while he continues to deny the existence of human-caused climate change, which makes heavy rainfall events like this one more likely. “Climate change is definitely impacting the maximum intensity of rainfall.”

What’s more, it’s terrifying to think that Trump will be handling this crisis while he continues to deny the existence of human-caused climate change, which makes heavy rainfall events like this one more likely. “Climate change is definitely impacting the maximum intensity of rainfall,” Nielsen-Gammon told me, explaining how the warmer atmosphere is able to hold more moisture and therefore release more rainfall during storms. It’s clear Trump doesn’t accept this reality, or any concept of preparation for any climate change-fueled disaster. He recently rolled back flood standards that required new federal infrastructure be built with sea-level-rise in mind. He’s not exactly inspiring confidence that he knows how to prepare for natural disasters.

Of course, there is a chance that something could change—that winds could shift and that Hurricane Harvey could change course, perhaps missing some of Texas’ most populated areas. “There’s a wide range of what could still happen,” Nielsen-Gammon said. There’s also a chance that Trump’s appointees and interim agency chiefs could work together seamlessly, mitigating damage to the best of their abilities. But considering we have both an unpredictable storm and an unpredictable president, we’ll just have to wait and see.