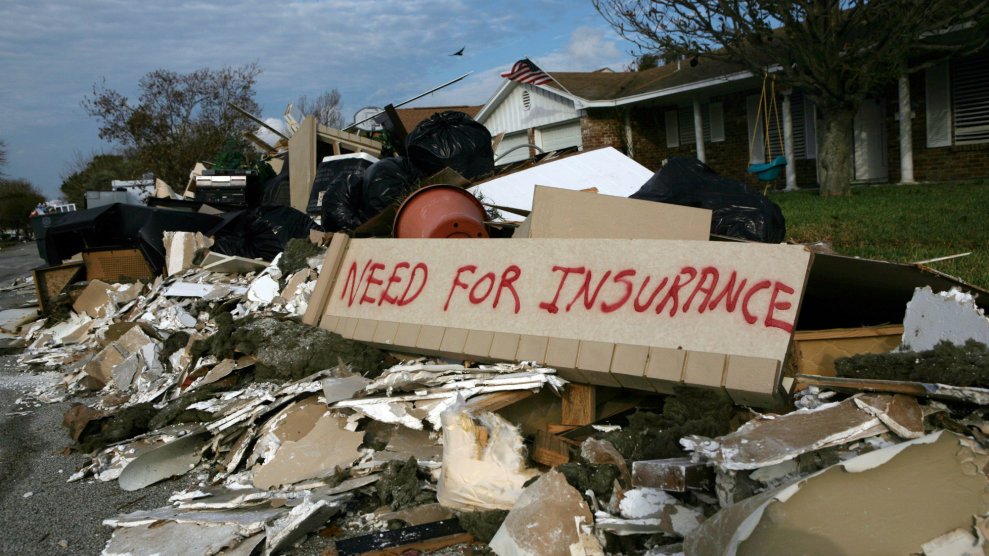 Hurricane and Tropical Storm Warnings are posted along the coast of Texas as Harvey makes its way across the Gulf of Mexico, promising to drop biblical amounts of rain on parts of the state. The storm, which is expected to strengthen to a category 3 hurricane by the time it makes landfall late Friday or early Saturday, will be the first major hurricane to strike the United States in 12 years and will likely cause devastating flooding from rain and storm surge.

Once the storm has passed and residents begin to clean up, they will likely use a federal program to make insurance claims. The National Flood Insurance Program (NFIP), created in 1968 and administered by the Federal Emergency Management Agency, is a federal program designed to help people in flood-prone areas get insurance for their properties, at heavily discounted rates. As Mother Jones reported in 2013:

Today, the Property Casualty Insurers Association of America estimates that homeowners covered by federal flood insurance pay just half of the “true-risk cost” to insure their properties. In the highest-risk areas, they pay just a third.

A series of disasters has left the NFIP struggling financially. Hurricane Katrina and Superstorm Sandy devastated the flood insurance program’s budget and today, the program is about $24 billion in debt. As climate change fuels an increase in disasters, storms of the same caliber may become the norm.

“There is actually a 50 percent chance within a 10-year period the NFIP will once again experience Hurricane Sandy-size losses.”

“There is actually a 50 percent chance within a 10-year period the NFIP will once again experience Hurricane Sandy-size losses,” Roy Wright, the director of the NFIP, wrote in a recent blog post.

Financial concerns aside, there are other problems as well. The program encourages people to build and stay in areas that flood constantly. There’s no incentive to leave because taxpayer subsidies rebuild homes and buildings, even if those structures have repeatedly flooded.

Attempts to overhaul the NFIP have not been successful and repeatedly have been met with backlash. In 2012, Rep. Maxine Waters (D-Calif.) and Rep. Judy Biggert (R-Ill.) introduced the Biggert-Waters Act, a law that would increase the rates for business properties in special flood zones and properties that experience repeated flooding. These proposed increases would have led to an enormous spike in premiums. According to a 2013 RAND Corporation study, premiums in flood prone areas in New York City would have increased by $5,000 to $10,000 a year. Even Rep. Waters was outraged once the numbers came in and was part of a bipartisan effort to draft a bill to make sure premiums wouldn’t suddenly spike. In 2014, Congress passed the Homeowner Flood Insurance Affordability Act, which delayed the Biggert-Waters reforms for two years. Today, premiums now have slowly begun to increase.

The current White House proposal for the program would certainly lead to more financial headaches. As part of deciding which areas are riskier, FEMA creates flood maps—but many of them are out-of-date. Funds had been previously allocated to update them, but Trump’s proposed 2018 budget included cutting $190 million from this effort. Without that money, FEMA would be forced to find money from somewhere else to fund mapping.

Financial solvability aside, the NFIP is must be reauthorized by September 30. Letting it lapse will cause chaos for those trying to buy insurance, so Congress must balance raising rates to make the program financially sound while also making sure flood insurance remains affordable—all in the midst of the hurricane season of 2017.