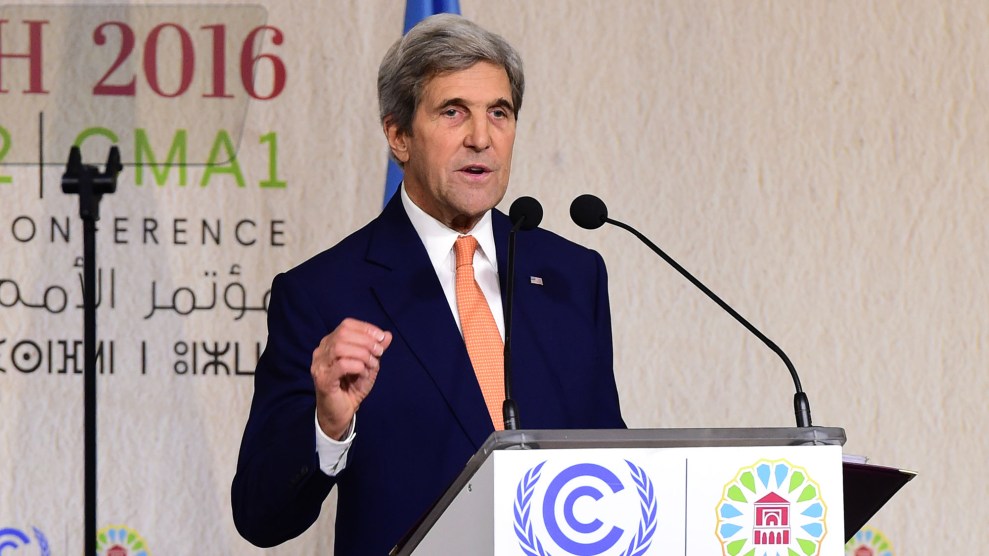 The United States on Wednesday announced an ambitious new goal to rapidly reduce planet-warming greenhouse gas emissions by mid-century, despite the incoming presidency of Donald Trump, a man who has called the phenomenon a “hoax” invented by the Chinese.

“It’s abundantly clear we have the ability to prevent the worst impacts of climate change. But again we’re forced to ask: Do we have the collective will? Because our success is not going to happen by accident.”

Secretary of State John Kerry said at a news conference in Marrakech, Morocco, that he couldn’t “speculate about what policies our president-elect will pursue.” But he noted that “some issues look a little bit different when you’re actually in office compared to when you’re on the campaign trail,” adding that climate change should cease being a partisan issue.

“It’s abundantly clear we have the ability to prevent the worst impacts of climate change,” Kerry said during the United Nation’s annual climate summit. “But again we’re forced to ask: Do we have the collective will? Because our success is not going to happen by accident.”

Under the newly released strategy, which aims to rapidly “decarbonize” America, emissions would be slashed about 80 percent by 2050, compared with levels set in 2005. The United States has already promised a 26 percent to 28 percent cut in emissions by 2025 and would build on those pledges through a transition to renewable energy production, carbon removal technology, and efforts to curb emissions from agriculture and other sources.

But many of these commitments will be in doubt once President Barack Obama leaves office. President-elect Trump has threatened to withdraw from last year’s landmark Paris agreement, end all funding on the issue and significantly increase domestic production of fossil fuels. While some have hoped the businessman would do an about-face once in office, his current short list to lead the country’s environmental agencies doesn’t bode well.

Nearly 200 nations are signed on to the Paris climate agreement, which aims to keep global warming below 2 degrees Celsius, the level scientists say the planet must stay beneath to avoid the worst effects of climate change. World leaders have been assuaging the public since the election, vowing to continue plans to curb emissions with or without the United States.

Kerry used his speech to urge those in power to “do your own due diligence before making irrevocable choices.”

“No one has a right to make decisions that affect billions of people based solely on ideology or without proper input,” he said. “Anyone who has these conversations, who takes the time to learn from these experts, who gets the full picture of what we’re facing?I believe they can only come to one legitimate decision, and that is to act boldly on climate change and encourage others to do the same.”

The US goal for 2050 drew praise from leading environmental groups, as well as promises of condemnation should Trump scale back America’s role in the climate change fight. The United States is the second-largest greenhouse gas emitter in the world, behind China and ahead of the European Union.

“No matter who is in the White House, any leader that wants to create jobs, protect our communities and be taken seriously in the international community must build on the climate legacy of President Obama and Secretary Kerry,” Michael Brune, executive director of the Sierra Club, said in a statement. “Anyone who fails to realize that not only poses a very real danger to our economy, our families, and our planet but simply cannot call themselves a global leader.”

Others, including the Union for Concerned Scientists, said the 2050 plan was a “good start” but stressed that the world will need to reach “net zero emissions by midcentury” to avoid the rising seas, melting glaciers and extreme weather of a warmer world.

A recent report from the United Nations Environment Programme found that, even with the world’s ambitious climate pledges, leaders would need to slash emissions 25 percent more, on top of existing plans, to avoid the 2-degree threshold.

“It’s still not good enough if we are to stand a chance of avoiding serious climate change,” Erik Solheim, the head of the UNEP, said earlier this month.