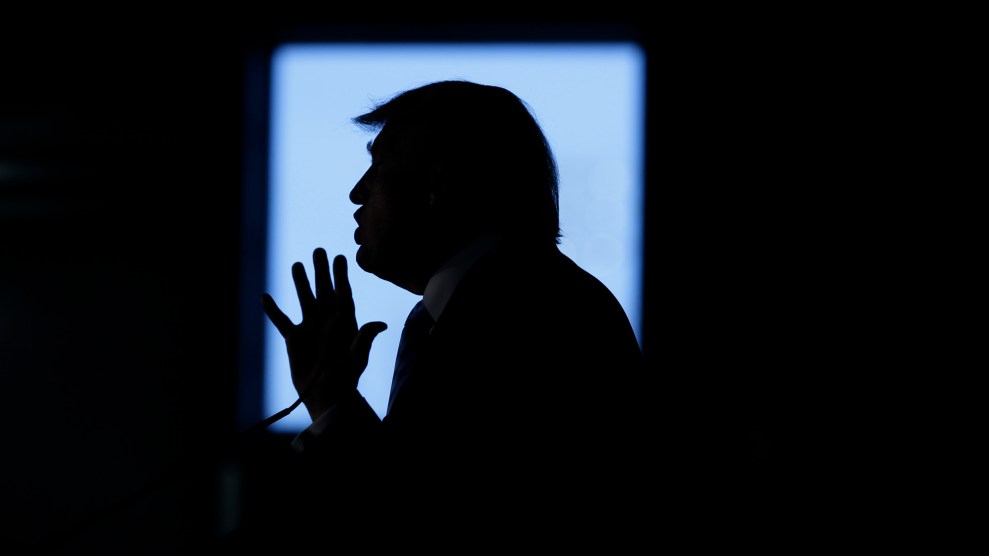 International negotiators are coming together on Monday in Marrakech, Morocco, for the most highly anticipated climate gathering of the year. But they’ll spend the first couple of days doing exactly the same thing as the rest of the world: holding their breath as they nervously watch to see how the US presidential election turns out.

Yes, America’s 2016 electoral dumpster fire will loom large at this year’s UN Climate Change Conference, aka COP22. The main goal of the Marrakech meeting is to hash out more specific plans for putting last year’s landmark Paris climate agreement into action. Donald Trump has said he would “cancel” the agreement, so if he’s elected, negotiators are likely to panic. If an antagonistic American president moved to pull the US out of the deal, implementing it around the globe would become a whole lot more difficult.

If, on the other hand, Hillary Clinton is elected, then conferees will feel more confident in getting down to work.

Riding a wave of momentum

US election aside, there’s a lot of positive momentum heading into COP22. The Paris Agreement formally entered into force on Nov. 4, much earlier than anticipated. That’s because leaders of other countries wanted to make sure the deal was done before American voters had a chance to throw it off-course, so they kicked their normally lethargic ratification processes into high gear. That says a lot about the unprecedented level of international commitment to this deal.

The Paris Agreement took effect last week because leaders of other countries wanted to make sure the deal was done before American voters had a chance to throw it off-course.

The month leading up to Marrakech saw two other notable steps toward climate progress. On Oct. 6, more than 190 nations reached the world’s first agreement to cut emissions from international flights. And on Oct. 15, over 170 countries pledged to rid air conditioners and refrigerators of hydrofluorocarbons—which can have warming potential thousands of times higher than carbon dioxide—in a legally binding accord, potentially cutting warming by 0.5 degrees Celsius (0.9 degrees Fahrenheit).

So negotiators are landing in Morocco on a wave of optimism. At the same time, they know there’s a great deal that still needs to be done. Says Yamide Dagnet of the World Resources Institute, “The COP is about celebrating, but it’s not about complacency.”

At last year’s Paris climate conference, 195 countries made a nonbinding agreement to keep warming below 2 degrees C (3.6 degrees F) above pre-industrial levels, with a stretch goal of limiting it to 1.5 degrees (2.7 degrees F). Each nation made an action pledge to cut or curb its greenhouse gas emissions, and agreed to ratchet up its commitment in the future. The Paris signatories also agreed to raise more funds to help poorer countries adapt to a warming world.

Now, in Marrakech, negotiators will try to figure out how to turn those promises into action. They won’t be able to sort everything out, so some of the work will roll into 2018. But here are the three big issues on the agenda:

One of the most contentious topics in Paris was money—big surprise—and you can expect the same in Marrakech.

In 2009, wealthier nations agreed to mobilize $100 billion in climate finance yearly by 2020 to aid poorer nations. In Paris, the rich countries reconfirmed that commitment, and in mid-October, released a plan for how they’d get there.

“This is nowhere near enough the amount of money that is needed to help the most vulnerable communities.”

But many leaders from developing nations and policy advocates say $100 billion falls far short of what’s needed for countries to create programs that stave off climate change and build infrastructure that can withstand it, while working to improve quality of life for their citizens and grow jobs and GDP.

“My organization and many others remain concerned that this is nowhere near enough the amount of money that is needed to help the most vulnerable communities,” says Annaka Peterson, who works on injustice and poverty issues with Oxfam America. “About 20 percent of the $100 billion promised would support adaptation. However, a lot of estimates suggest that by 2030 developing countries could face costs from $140 billion to $300 billion a year.”

And actually, rich countries are not planning to come up with $100 billion a year themselves. They’re counting on sizable contributions from private companies to help meet that goal, which has some negotiators and activists wary about conflicts of interest.

If nations are to fully invest in the Paris process, they need to be able to trust that other nations are working toward their goals and accurately reporting their progress. The Paris Agreement asks countries to publish national data on emissions as well as submit their data to a review body.

But how will that work in practice? Will the process be different for rich and poor countries? Negotiators in Marrakech will be working on creating those systems.

“What is the structure of how we look at transparency from now on?” asks Mariana Panuncio-Feldman, senior director of international climate cooperation at World Wildlife Fund. “Will there be flexibility for countries in how they’re reporting?”

Countries also need to start getting specific about how they’ll fulfill their pledges, known as Nationally Determined Contributions, or NDCs. Andrew Steer, president and CEO of the World Resources Institute, says countries should be bringing detailed plans to Marrakech to demonstrate their progress. “What we need to see is NDCs turning from aspirational to roadmap and investment plans,” he says, “the sort of soup to nuts.”

Perhaps the biggest shortcoming of the Paris Agreement is that it sets the world on a path to 2.7 to 3 degrees C (4.9 to 5.4 degrees F) of warming above pre-industrial levels—significantly higher than the 1.5–2 degree C ceiling called for in the actual text of the agreement, and needed to avert drastic climate change.

“Marrakech needs to pave the way for more ambitious action.”

But that more aggressive goal will play an important role in Marrakech, where another critical task is setting a plan to ratchet up the ambition of countries’ pledges every few years. The Paris deal calls for countries to assess progress in 2018 and return to the table in 2020 to revisit and ideally toughen their action plans. Diplomats need to create a system that can spur cuts every five years, while increasing the expectation of how drastic those cuts will be.

Based on the agreement’s swift ratification, climate advocates are hoping countries will be able to toughen their plans even earlier than called for, in 2018, as part of a “global fact check,” says Mohamed Adow, co-chair of Climate Action Network International.

“The question is: How fast and how deep is the green transformation going to be? This is why Marrakech is going to be important,” says Dagnet. “Marrakech needs to pave the way for more ambitious action.”

While the Paris conference was a flashy affair fit for celebrities and political wheelers and dealers, Marrakech is one for the wonks to sort out the nitty-gritty. The proceedings won’t be as glamorous, but they’re still critically important.