As negotiators headed to Copenhagen in December 2009 to forge a global climate pact, concerned US business leaders and liberal luminaries took out a full-page ad in the New York Times calling for aggressive climate action. In an open letter to President Obama and the US Congress, they declared: “If we fail to act now, it is scientifically irrefutable that there will be catastrophic and irreversible consequences for humanity and our planet.”

One of the signatories of that letter: Donald Trump.

Also signed by Trump’s three adult children, the letter called for passage of US climate legislation, investment in the clean energy economy, and leadership to inspire the rest of the world to join the fight against climate change.

“We support your effort to ensure meaningful and effective measures to control climate change, an immediate challenge facing the United States and the world today,” the letter tells the president and Congress. “Please allow us, the United States of America, to serve in modeling the change necessary to protect humanity and our planet.” 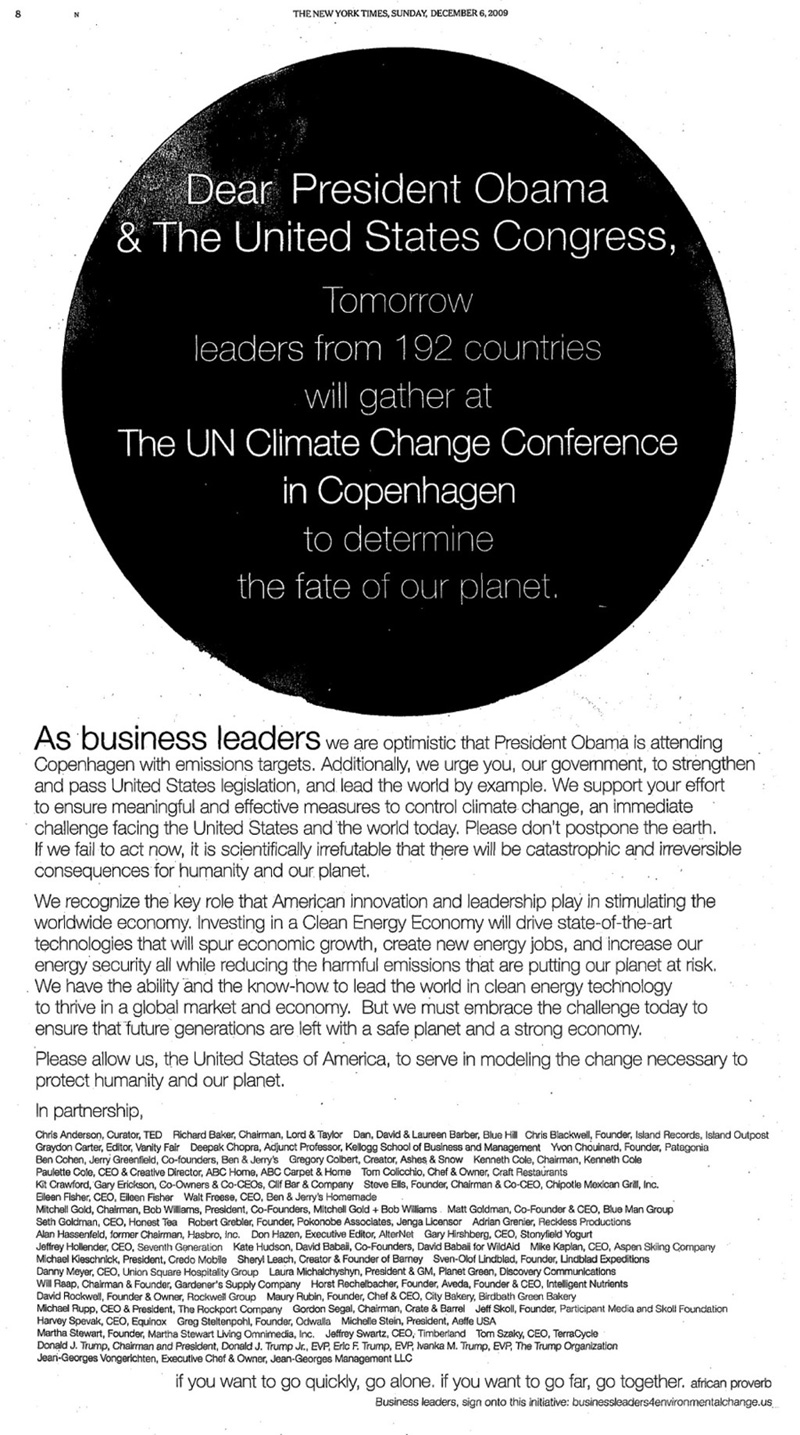 In every conceivable way, the letter contradicts Trump’s current stance on climate policy. On the campaign trail, Trump has said he is “not a big believer in man-made climate change.” Last fall, after Obama described climate change as a major threat to the United States and the world, Trump said that was “one of the dumbest statements I’ve ever heard in politics — in the history of politics as I know it.”

The 2009 ad also argues that a shift to clean energy “will spur economic growth” and “create new energy jobs.” But these days, Trump contends that US action to limit greenhouse gas emissions would put the country at a competitive disadvantage. In 2012, he went so far as to claim: “The concept of global warming was created by and for the Chinese in order to make US manufacturing non-competitive.”

The Copenhagen conference that inspired the open letter was part of the same two-decade-long U.N. negotiating process that led to a global climate deal in Paris last year. But whereas in 2009 Trump supported the process via the ad, now he wants to sabotage it, promising recently to “cancel” the Paris accord.

The Trump campaign did not respond to a request for comment on Wednesday.

Trump’s signature on the ad, which ran in the Times on Dec. 6, 2009, stands out on a list dominated by liberal media and business figures, including the founder of Patagonia, the cofounders of Ben & Jerry’s, the president of CREDO Mobile, the executive producer of Al Gore’s An Inconvenient Truth, celebrity chef Tom Colicchio, actors Kate Hudson and Adrian Grenier, media heavyweights Martha Stewart and Graydon Carter, and New Age author Deepak Chopra.

None of the signers that Grist interviewed this week could recall who had organized the letter or knew who had asked Trump to sign. The website of the group listed on the ad, businessleaders4environmentalchange.us, is now defunct, and no information was available on who had registered it. 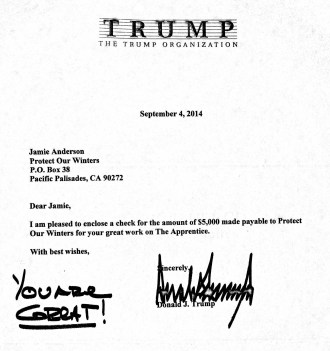 Beyond the Times ad, Trump has supported climate causes and expressed concern about global warming at least twice before. In 2014, Trump sent a $5,000 check to Protect Our Winters, a climate advocacy nonprofit for skiers and snowboarders, after a Celebrity Apprentice contestant requested his support.

The second time was when climate change hit The Trump Organization’s bottom line: His golf course in Ireland is threatened by coastal erosion, so the company recently applied for a permit to build a seawall to protect the property from “global warming and its effects.”

Other than that, Trump has been fairly consistent in his views on climate change — or consistent for Trump. Two months after signing the open letter, he told members of the Trump National Golf Club that Al Gore should be stripped of his Nobel Prize because that winter had been cold. “Gore wants us to clean up our factories and plants in order to protect us from global warming, when China and other countries couldn’t care less,” he said. “It would make us totally noncompetitive in the manufacturing world, and China, Japan and India are laughing at America’s stupidity.”