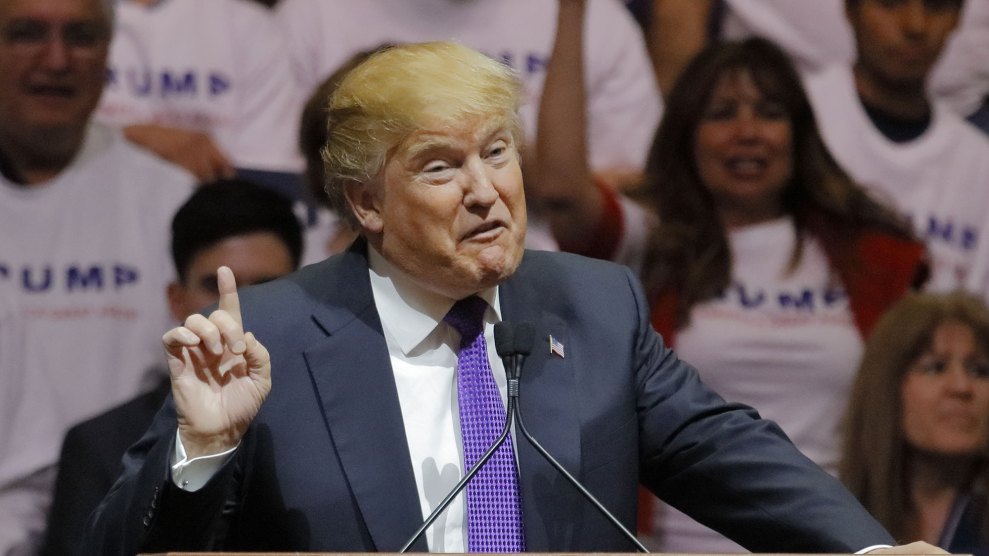 A couple of weeks ago, Donald Trump took a stage in Bismarck, North Dakota, and laid out his vision for addressing climate change and energy issues should he win the White House. It was about what you might expect from a candidate who has previously claimed that global warming is a hoax invented by Chinese bureaucrats to disadvantage US manufacturers. He railed against the historic global agreement on climate change struck in Paris last year, called President Barack Obama’s cornerstone climate policy “stupid,” and said that his administration “will focus on real environmental challenges, not the phony ones we’ve been looking at.” Though after he fulfills his promise to dismantle the “Department of Environmental,” it is hard to imagine how he would make that happen.

The Washington Post called Trump’s proposals “dangerous and nonsensical,” and Christine Todd Whitman, a former Republican governor of New Jersey and head of the Environmental Protection Agency during George W. Bush’s first term, agreed. Whitman has always been a bit of a nonconformist among conservatives on climate change: She pushed hard for Bush to let the United States join the Kyoto Protocol, the last significant stab at global climate action prior to Paris, and she infamously told the Post that she left the EPA after coming under intense pressure from then-Vice President Dick Cheney to implement lax regulations on emissions from coal-fired power plants.

These days, she co-chairs the CASEnergy Coalition, an educational coalition that promotes the use of nuclear power as a solution to climate change. In earlier, more innocent days of the Republican primary race, she endorsed Ohio Gov. John Kasich. Now she “will not vote for Trump,” but is on the fence about Hillary Clinton. The Democratic nominee, she said, “has real flaws, but hers are more within the normal parameters we’re used to. Trump’s are way outside, as far as I’m concerned.”

I had a chat with Gov. Whitman about the threat Trump’s candidacy poses to Obama’s climate legacy and why his energy “plan” makes no sense:

Climate Desk: What did you make of Trump’s energy speech in North Dakota?

Christine Whitman: Not surprised, but disappointed. I don’t think he has a full grasp, not surprisingly, of the issues. He’s taking moves that I believe are totally contrary to the health and well-being of the country and the citizens, when you talk about walking away from [the Paris Agreement], when you talk about having a need to restart coal plants. He should know that the reason a lot of the coal plants are shutting down now has nothing to do with environmental regulations and everything to do with economics and the low price of natural gas, which he also wants to encourage. So those two things run counter to one another in a way. He’s talking about rolling back the clock, which I think is very dangerous.

CD: Trump’s comments on climate and energy might seem radical, but aren’t they really just a more extreme, less articulate version of sentiments we hear from Mitch McConnell and other prominent Republicans frequently: Climate change isn’t a threat, we need to save coal and the fossil fuel industry, etc.?

“First of all, environmental protection is a Republican issue.”

CW: Well, first of all, environmental protection is a Republican issue. The first president to set aside public land was Lincoln. It was Nixon who established, with a Democratic Congress, the Environmental Protection Agency. This is in our DNA. Conservation is inherently conservative, and it should be something that we embrace. So I would like to see Republicans understand this and also recognize facts. You can have economic growth and a clean and green environment. We’ve done it. It’s not a zero-sum game. They’ve just got to get off this attitude that you can’t have them both at the same time.

[During the Nixon era] the public said, “We don’t like being told not to go outside from 10 to 4 because of bad air quality,” and “We don’t like seeing our land turned into a garbage dump.” That’s what drove Congress and the president to actually take action. To walk away from [environmental issues] is a very dangerous political move, if nothing else, because the public still doesn’t want dirty air and dirty water and trashed land.

CD: And yet, here we are with a Republican nominee for president who is a climate change denier. What do you think the effect of Trump’s candidacy on Obama’s climate legacy will be? Is he lending a sense of urgency to formally finalize the Paris Agreement?

CW: Well, I hope he’s not representative of the party as a whole. I mean, he’s off the charts as far as what you can expect him to do or say. He is scaring other countries, and that’s pushing a desire to get [the Paris Agreement] done while we can—and make it that much harder for him to roll back. He says he’s going to roll back a lot of things, but he can’t do it. He’s not an emperor, but he doesn’t seem to get it. He is going to try to push the powers of the presidency, the boundaries. He doesn’t seem to understand the Constitution or really care much about it.

“He is scaring other countries, and that’s pushing a desire to get [the Paris Agreement] done while we can.”

But still, some of those who oppose taking dramatic action [on climate change] in India or in China are saying, “Wait a minute, the United States is going to back out. Do we still want to be a part of this?” So it’s making it much more difficult and confusing for people.

CD: What are you hoping to see from the candidates on climate change as the election moves forward?

CW: Truth? I hope they don’t get into it. [An election] is the worst time to discuss serious policy, because people politicize everything. I really don’t want to see a deep dive into climate change or into these issues, other than a recognition that they exist, that they’re important, and that we have to take action. Right now, on every issue, the extremes are pushing the agendas.

What I’m really scared about is that people get dug in too far. And they’ll have to move further to the left, further to the right, the lines will get harder, and then once someone is elected there will be an inability to move back to the center or to really get things done. We all know that people will say things during campaigns that they don’t really mean. Or they’ll be willing, when they come into office, to look at what the reality is. So when they get in, if they’ve really painted themselves into a corner, then we’re not going to be able to have the kind of discussion that we need to get these issues solved.