“If I seem like a radical,” Earle answers slowly, “it may be because I see things that others do not.”

Unlike 99.9 percent of us, Earle actually gets to say stuff like that. As a woman who has spent almost a year of her life underwater, she really has witnessed things that we cannot imagine. Unfortunately, that includes not only the awe of swimming with a pack of whale sharks in the Gulf of Mexico (and hundreds of other underwater adventures), but also visiting once vibrant coral reefs that today look like desiccated moonscapes, or finding trash entangled in kelp and office chairs sitting on the sea floor. 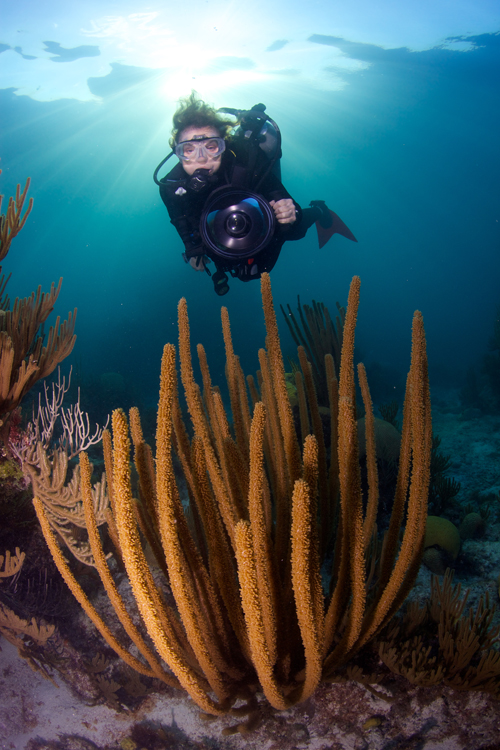 Dr. Sylvia Earle in a scene from the Netflix documentary “Mission Blue.” Netflix

In Mission Blue (directed by Fisher Stevens, who also brought us “The Cove”), we follow the now 78-year-old Earle from her Florida childhood as a nature-loving kid all the way through her career as the National Oceanic and Atmospheric Administration’s chief scientist, and now on to her role as a leader of ocean conservation initiatives. Along the way, the film samples her ultra-nerdy research on algaes, travels around the world with her for dives, and lets us hear from her biggest fans, including filmmaker and ocean explorer James Cameron.

There are also some very powerful scenes, in which Earle is shocked and devastated as she visits Japanese fish markets where young tuna are slaughtered before they’ve even had a chance to reproduce, and in which she vigilante-dives with a camera to film industrial fishermen sucking up gigantic hauls of fish, like something out of a high seas version of The Lorax. You can watch that scene above.

No wonder Earle herself refuses to eat fish. As the above segment ends, Mission Blue unveils an incredible statistic about the damage we have done to our oceans since the year 1950. Now, compared with then, only 5 percent of bluefin tuna remain; only 10 percent of sharks remain; and only 5 percent of Atlantic cod remain. It’s really that bad.

Anybody can point out such statistics, though; what is so amazing about Earle is how she motivates you to want to change them.

“If I could be born anywhere in time,” says Earle at the end of the film, “it would be now. It would be now because this is the time, as never before, that we know, we understand, what we didn’t know 50 years ago. If we wait another 50 years, opportunities we now have will be gone. This is the moment. Our decisions, our actions, will shape everything that follows.”

Sylvia Earle was also one of our earliest guests on the Inquiring Minds podcast; you can stream that show below: