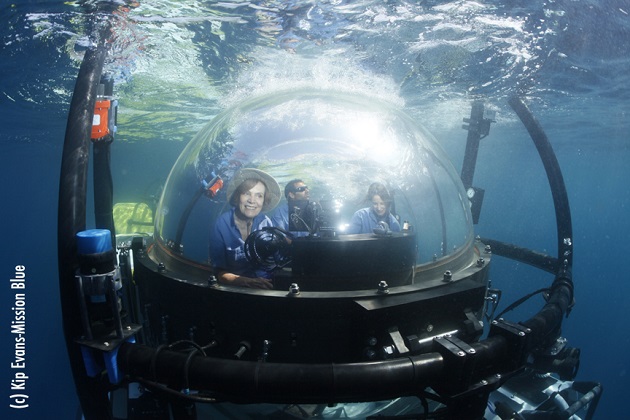 Sylvia Earle hasn’t quite spent a year under water—yet. At age 78, she’s at over 7,000 hours, which translates into about 292 days.

But she’s going strong. “I just added a few more hours to time under water,” Earle says, “because I’ve just returned from the Gulf of Mexico, 100 miles offshore to a place called the Flower Garden Banks, where at this time of the year, several key species of corals whoop it up and do what it takes to make more corals.” Earle is referring to the phenomenon of mass coral spawning, in which huge numbers of corals all release gametes into the water at once, which in turn float to the surface where fertilization occurs. To hear divers tell it, these events of mass reproduction are one of the great wonders of the undersea world—one that all too few of us ever get to see.

“We were diving three times a day, and then another dive at night,” Earle continues, “to observe the action on these reefs.”

If you’re inspired by Earle’s ability to pull this off at age 78, just wait: The real inspiration lies in her stunning plea for ocean conservation. In this episode of Inquiring Minds (click above to stream audio), Earle doesn’t shy away from giving us the really, really big picture. She explains that we’re the first generation of humans to even know what we’re doing to 96 percent of the Earth’s water—through assaults ranging from over-fishing to noise pollution to global warming’s evil twin, ocean acidification.

Older generations just didn’t get it; they simply had no idea they could have this effect. “We have been under the illusion for most of our history, thinking that the ocean is too big to fail,” Earle says. Now, thanks in large part to the work of ocean adventurer-scientists like Earle, we know better. And we’re right at that crucial moment where knowing something might actually help us make a difference. 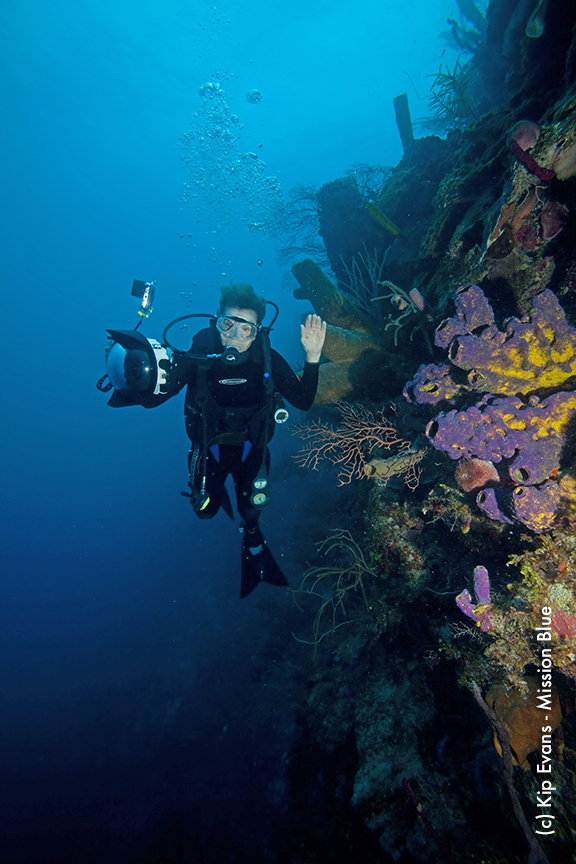 Dr. Sylvia Earle diving along a deep ledge off the coast of Honduras. ©Kip Evans/Mission Blue

Earle ought to know: She hasn’t just studied the oceans, she’s lived them. Her titles include National Geographic Society Explorer in Residence, and former chief scientist at NOAA—plus she’s a TED Prize winner who used that award to form Mission Blue, an ocean conservation initiative. Her unofficial titles go further: Time called her “Hero of the Planet,” and many other call her “Her Deepness.”

Earle has set several underwater depth records, including diving to 1,250 feet without a tether (in other words, without a safety line connecting her to another human at the surface) in 1979. Oh, and then there’s her scientific research: Over 100 publications on topics including marine flora and fauna (Earle has discovered several new species), the effects of oil spills, undersea exploration technologies, and much else.

Back in 1970, when some institutions of higher education were still refusing to admit women, Earle was leading female aquanauts on expeditions to the sea floor. The Tektite Program included a team of women who lived in an undersea laboratory off the Virgin Islands for two weeks, conducting research. Asked on Inquiring Minds how she was so ahead of the curve, Earle responded: “I think all of us are a little behind the curve for taking advantage of a half of the world’s population.”

In pushing us to care about the oceans, Earle’s plea is as simple as it is moving. First of all: We now understand the massive effect we can have. Now we see our impact and we see tipping points already before us. Ocean acidification is one of them: As ocean waters become more acidic due to increasing concentrations of dissolved carbon dioxide, the entire chemistry of the ocean changes, creating a new environment that ocean organisms aren’t necessarily evolved to cope with. Bleaching corals go first, but corals are fundamental to entire undersea ecosystems. Many shelled organisms also fare badly under acidification—clams, oysters—and thus, by definition, so do ecosystems (or, the humans) that rely on them.

Here are some other stunning facts about just how much humans have devastated the oceans:

* According to the UN Environment Programme, “every square mile of ocean contains 46,000 pieces of floating plastic.”

* A 2008 study found 400 ocean dead zones—regions without enough oxygen for ocean life—amounting to a total area of 245,000 square kilometers. That’s as large as the United Kingdom.

* According to one prediction, unless something changes, all global stocks of fish that are harvested for human consumption will collapse by 2048.

* Ocean acidification is proceeding at an insane clip: Recent research suggests the rate is faster than at any time in the last 300 million years. 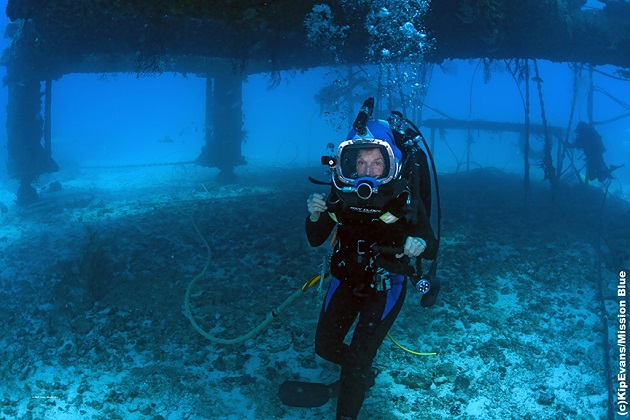 We can see all of this now. And we see one other big thing, too: The oceans are, in Earle’s metaphor that quickly becomes literal, a life support system. If they go, we go. “The ocean dominates the way the world works, makes our lives possible,” says Earle. “Take away the ocean, you’ve got a planet a lot like Mars.”

All of this knowledge then puts us in a pretty unique place: We’re the first generation that can see what we’re doing, and just maybe take a different path. In the Inquiring Minds interview, Earle invokes a recent book by the famed Harvard biologist E.O. Wilson, The Social Conquest of the Earth, to argue perhaps the most important thing about humans is that they not only learn, they pass on knowledge they’ve gained. What this means, says Earle, is that we alone could prove to be the “visionary generation,” the “heroic generation,” the one that “for the first time could see back into the past, evaluate the present, and anticipate what needs to be done.”

For as Earle puts it, “This is the sweet spot in time. Because never before could we know what we know, and never again will we have a chance, as good as we have now, to really make a difference.”

You can listen to the full show with Sylvia Earle here (warning: it will make you want to do something to save the oceans):

This episode of Inquiring Minds also features a discussion of the latest research on how conspiracy theories fuel the denial of science on issues ranging from climate change to vaccinations, and on how scientists are reconsidering the origins of life and…yes, bringing Mars into the picture.