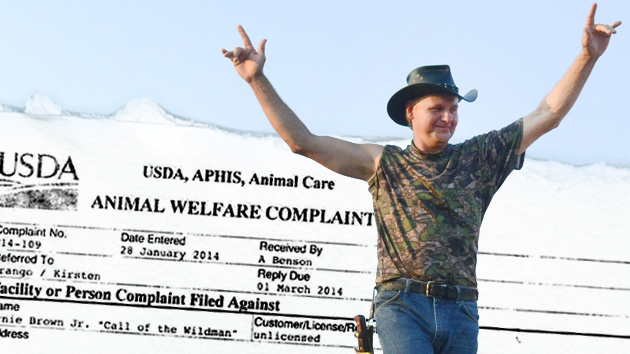 Earlier this year, Mother Jones reported on malnourished raccoons, caged coyotes, and bats left for dead behind the scenes of Animal Planet’s hit show Call of the Wildman. During a seven-month investigation, we discovered that the show’s producers routinely sourced trapped wildlife to perform roles in heavily scripted “rescue” scenes.

Now, federal authorities have confirmed cases of animal mistreatment in the show. In a 60-page internal dossier, one investigator says animals used on set likely suffered “deprivation and distress” that “threatened their health and well-being.”

The USDA found that the show’s animals likely suffered “deprivation and distress” that “threatened their health and well-being.”

The documents from the United States Department of Agriculture (USDA)—released for the first time to Mother Jones—reveal investigators criticizing the show’s producers for supplying “contradictory and incomplete” statements to authorities, and calling for a “more exhaustive and detailed” investigation than the preliminary “fact finding” the department has been engaged in since Mother Jones first broke the story.

Inspectors also fault the show’s star, Ernie Brown Jr., known as Turtleman, for traumatizing a protected species of zebra by tackling the animal to the ground by its neck, all with the cameras rolling. The zebra’s owner, a production contractor, was issued a formal citation for non-compliance with the Animal Welfare Act in March.

The complete dossier—a mix of emails, case files, and memoranda compiled over four months by one of the USDA’s law enforcement arms—contains new details that add to Mother Jones’s reporting about the show’s cavalier production practices.

Although they deny it, Sharp Entertainment acquires, holds, uses and disposes of the animals during and after the filming the show…It appears that Sharp Entertainment could not legally become licensed to use trapped or captured native wildlife without circumventing state law.

Neither Sharp nor Animal Planet responded to questions from Mother Jones. Reached by phone, Animal Planet’s vice president for communications, Patricia Kollappallil, declined to comment on the internal USDA report or refer questions. “I don’t think there’s anybody that’s equipped to speak with you, frankly,” she said. “I’m going to hang up.”

In spite of grave concerns, Call of the Wildman is back on the air

Despite the federal investigation, Animal Planet premiered a new run of the show with an episode called “Phantom Menace” last Sunday, June 8. Animal Planet Canada, one of the network’s sister channels, abruptly canceled future episodes of the show in April, saying the show had stopped “resonating with Canadian audiences.”

The show returns to US airwaves amid concerns by state officials in Kentucky that Turtleman might be planning to film new episodes without holding a proper wildlife permit to catch animals himself—the defining part of Turtleman’s on-camera performance. As of Monday this week, officials with the Kentucky Department of Fish and Wildlife confirmed that Ernie Brown Jr. does not possess a current Nuisance Wildlife Control Officer (NWCO) license, a permit he has previously held and that enables him to catch and handle wildlife.

“They shouldn’t be doing anything in Kentucky,” says Mark Marraccini, a spokesperson for the department, referring to filming.

The show’s producers have not contacted the department, which overseas the licenses, to notify officials of their intentions, Marraccini says. But multiple sources have told Mother Jones the show is “in production.”

An official citation against the owner of a zebra

In the Texas-based episode of the show called “Lone Stars and Stripes”, Turtleman chases a Grévy’s zebra—an animal protected under the Endangered Species Act—before cornering it and tackling it to the ground. Jason Clay, owner of the zebra and an animal park called Franklin Drive-Thru Safari, told Mother Jones that the animal was treated properly by the crew. But USDA’s inspection report confirms that by allowing Brown to tackle the animal, Clay did not comply with the part of the Animal Welfare Act that prohibits handling animals in a manner that could cause “trauma, behavioral stress, physical harm or unnecessary discomfort.” Clay could not be reached for comment on the citation, and did not return a message left at the Franklin Drive-Thru Safari.

Baby raccoons used on the show likely “experienced unnecessary deprivation and distress, accompanied by a lack of adequate veterinary care.”

Sick baby raccoons left in the care of production staffers

The USDA documents also reveal new details of the saga that eventually led to the death of one of the raccoons used for a 2012 episode involving the staged “rescue” of a family of raccoons. The investigator found that the vet who received the baby raccoons as part of the episode’s rescue scene immediately diagnosed the babies with dehydration, contradicting Sharp Entertainment’s earlier statements to Mother Jones that the baby raccoons were transferred to the vet in question in a good condition, and “by all accounts were healthy.”

Arango concludes in his investigation notes that show’s producers likely exposed raccoons in its care to unnecessary harm through mistreatment:

… based on the age and medical history of the raccoon kits used on the show, and what appeared to be inappropriate handling, it is likely that these animals experienced unnecessary deprivation and distress, accompanied by a lack of adequate veterinary care, which threatened their health and well being.

Arango also found that that “the raccoons were acquired by Sharp on April 5, at least 7 days before they were released or transferred on April 12.” This would place the handling of the raccoons well outside the maximum 48 hours allowed under Kentucky law.

Animal welfare organizations are upset about the return of the show to Animal Planet on Sunday, and have renewed calls for its cancelation.

“The Humane Society of the United States is disappointed that the network has decided to renew Call of the Wildman in the face of allegations that the animals were taken from the wild, became sick, and endured inappropriate confinement on previous shows,” said Nicole Paquette, a vice president for the organization. “We urge the network to take immediate action and discontinue this program. The only way to ensure animals are not harmed is to not use them.” Carter Dillard, from the Animal Legal Defens4e Fund praised the USDA’s investigative work, saying that it shows “significant violations and pattern in practice across multiple licensees.”

Elsewhere, wildlife officials with the state of Texas and the city of Houston both have separate, ongoing formal investigations into Call of the Wildman.

Meanwhile, fans of Animal Planet’s brand of reality TV enjoyed a double-dose of Turtleman on Sunday. Before Call of the Wildman aired last Sunday, Turtleman and his sidekick Neal made cameo appearances in the season premiere of Finding Bigfoot, a show that follows researchers who collect evidence for the existence of the mysterious Sasquatch.