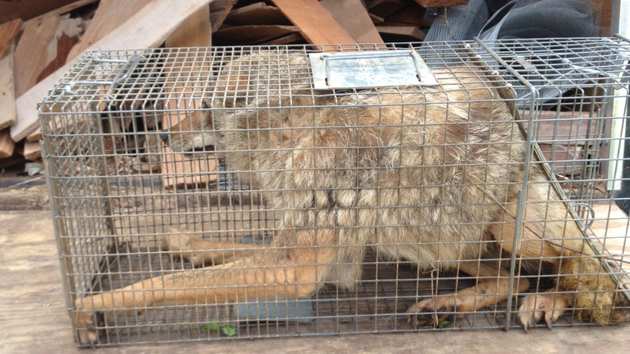 This coyote was trapped at the request of Animal Planet, and was replaced with another when it was "sick and unresponsive," according to two people involved. (See the uncropped photo here.)

Update March 25, 2014 2:45 p.m. EDT: A spokesman for the Kentucky Department of Fish and Wildlife Resources has confirmed to Mother Jones that the department’s permit and law enforcment divisions are looking into the coyote episode detailed in our below report. The probe comes in addition to those ongoing by the US Department of Agriculture and Texas authorities.

Mother Jones has uncovered photographic evidence of mistreatment and neglect of animals behind the scenes of Animal Planet’s hit reality show Call of the Wildman, a pattern first exposed in our seven-month investigation published on January 21. Additional documents we obtained also raise questions about whether the show operated in violation of Kentucky wildlife regulations. The latest revelations include:

In a scripted segment for the episode “Lured into Danger,” which first aired in July 2013, the wildlife handler known as Turtleman lures and traps a coyote while the cameras are rolling in a barn purportedly owned by an “animal psychic.” The segment was filmed on May 10, 2013, in Waddy, Kentucky, three days after the photo of the trapped coyote was taken in Bowling Green, Kentucky. 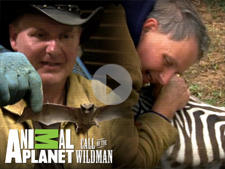 See Part 1 of our investigation uncovering animal mistreatment behind the show.

According to the person who provided the photo, the coyote was captured by a NWCO at the request of the show and “was transported for hours in cramped conditions.” Where the coyote was then held and under what conditions could not be confirmed, but as the May 10 film shoot approached the coyote was weak and limping, the source said. It would be brought to the filming location anyway. “That bit sickens me,” the source said. A second person who worked on the production confirmed that the coyote was sluggish and unresponsive as the film shoot approached. “The animal was just sitting there, so they had to get another coyote fairly quickly,” that second source said.

Internal documents and communications show that Sharp Entertainment turned to Kokas Exotics, a farm that breeds and raises exotic animals in Ohio. The replacement coyote obtained via Kokas Exotics, at a cost of $500, was picked up by production staffers in Ohio on May 9 and brought to the filming location in Waddy by the following day.

It is against Kentucky law to import coyotes. State regulators may grant an exemption for an accredited zoo or other educational or research institution, but such exemptions are uncommon, and the animals are otherwise prohibited in order to prevent the spread of rabies, according to Chad Soard, an official with the Kentucky Department of Fish and Wildlife Resources. According to state records and Kentucky officials, neither Animal Planet nor its subcontractors were granted such an exemption.

Even with the replacement coyote from Ohio now in hand, producers brought the sick coyote to the filming location on May 10 as a backup, “just in case something happens,” according to a production source and internal communications.

Responding to questions from Mother Jones about the sick coyote in a phone interview prior to the publication of our initial investigation, Dan Adler, a vice president for Sharp Entertainment, said: “On the day in question you bring up, a licensed NWCO officer arrived to a location with a coyote he had caught after receiving a nuisance call, and when he brought it to us, the licensed NWCO officers on set moved it from the smaller cage it was caught in to an appropriately sized cage.”

“I would only use a cage this size for transportation or holding purposes as a last resort,” said a wildlife expert shown the photo.

In a statement emailed to us a week later, Adler clarified, “The coyote in question was determined to be sick by the licensed officers on location. The determination was made not to film with it because production policy is not to film with sick or injured animals.”

Despite multiple follow-up inquires from Mother Jones, Animal Planet and Sharp Entertainment did not respond to additional questions about the coyote episode, including about the importation of the second coyote from Ohio, the conditions under which each of the coyotes was held captive by the production and its subcontractors, and what the production did with the two coyotes after the film shoot was over.

Sharp Entertainment has asserted that Call of the Wildman gives nuisance wildlife “a second lease on life.” The company has also explicitly denied the practice of trapping animals deliberately for the show: “NWCO officers are compensated for bringing animals to production that they have captured in the regular course of their work,” the company has said.

But a production source says that the sick coyote was specifically requested from a NWCO operating in southern Kentucky: “We asked him to trap it.” Two internal documents confirm that Sharp Entertainment paid a licensed NWCO in southern Kentucky $250 for “animal consultation and transportation services” on May 9, 2013. And according to disclosure records required by his state license, the NWCO working for the show did not report the capture of a coyote during a nuisance call on or around that date.

Confining a coyote to the size trap seen in the photo could cause great harm to the animal, according to University of Kentucky wildlife experts consulted by Mother Jones. John J. Cox, a professor of wildlife ecology and conservation biology, said that a coyote, innately fearful of humans, likely would not have entered such a trap of its own accord and more likely was forced inside. Given the acute stress to the animal that would result, he said, “I would only use a cage this size for transportation or holding purposes as a last resort.”

Kentucky regulations require wildlife to be transported “in a safe manner that minimizes stress to the animal.” State law also requires that “a cage shall be large enough to ensure that each animal has sufficient room to stand erect and lay naturally.”

“The method of capture portrayed on your television show did not ensure that the bats were not lethally harmed,” a Kentucky official warned the show’s star in 2012.

Sharp Entertainment has said that it does not hold wildlife captured by licensed NWCOs for more than 48 hours, as mandated by Kentucky. But metadata from the photo (the digital fingerprint that reveals when and where the photo was taken) and internal production documents show that the photo was taken approximately 84 hours before the coyote was to be used in the show’s “live action” sequence.

In an appearance on CNN following our initial report, Adler, the Sharp representative, vehemently denied that animals were harmed in connection with the production. He said that the company was alerted in May 2013 to complaints by a staff member and responded by putting in place new guidelines and hiring a licensed animal handler. “This is old news,” Adler said, adding, “at that time we found most of those cases to be inaccurate; however, we still constantly make animal welfare the most important thing…so we instituted some changes at that point.”

In March 2012, Major Larry Estes, an enforcement officer with Kentucky Fish and Wildlife, wrote to Turtleman warning him that his specific method of hand-capturing bats for a 2011 episode, “Dilapidated Death Trap,” risked killing them in violation of Turtleman’s NWCO license. Estes wrote that “the method of capture portrayed on your television show did not ensure that the bats were not lethally harmed.”

More than a year after Estes’ warning, Animal Planet began filming another episode involving bats, this time inside a hair salon in Texas, which depicts identical hand-capture techniques.

State records reveal additional concerns among wildlife regulators, including how the show handled porcupines and a white-tailed deer. Kentucky officials warned Turtleman and Neal James, his sidekick, of potential violations during a face-to-face meeting on February 10, 2013. Handwritten notes on the documents show officials considering how to proceed with an investigation, including the possibility of subpoenaing raw footage from Animal Planet and testimony from Ronnie Vincent, a licensed NWCO employed by Sharp Entertainment. By August 2013, Kentucky wildlife officials issued another warning letter to Turtleman, this time raising the possibility of canceling his wildlife license.

As of March 20, neither Turtleman nor anyone else connected with the show has contested the allegations, according to state officials. Yet Kentucky authorities have not opened an official investigation nor taken enforcement action against the production to date, according to a state official.

In Texas, however, state and Houston city officials told Mother Jones that they have opened investigations concerning the bat episode in the hair salon as well as another involving a drugged zebra. The US Department of Agriculture also confirmed that it is looking into the show’s handling of animals in light of our reporting.

See Part 1 of the investigation here, and watch the video: