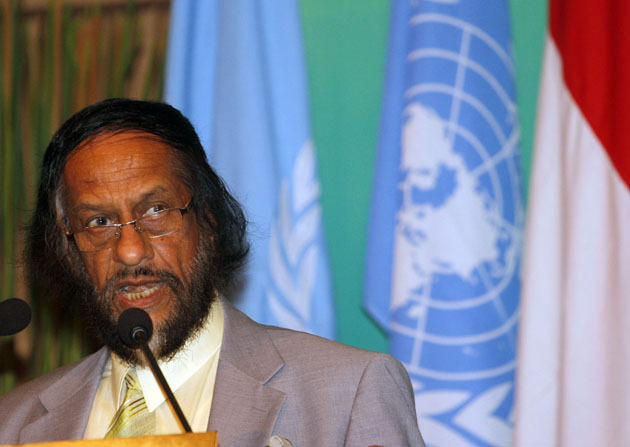 Chairman Rajendra K. Pachauri speaks at the 2009 session of the IPCC.Johannes P. Christo/ZUMA

You’re going to be hearing a lot about the Intergovernmental Panel on Climate Change during the next couple of weeks. And then again in spurts during the coming year. The IPCC is the world’s foremost authority on—you guessed it—climate change. It’s the top cat, the big cheese, the heavyweight champion of the world community of climate experts.

It’s a scientific group set up in 1988 by two divisions of the United Nations. The goal was to form a body that would provide policymakers with trusted, cutting-edge information about climate change.

Thousands of climate scientists from around the world volunteer their time to analyze and summarize the latest and best science. The result: Big, fat reports.

And now the IPCC is dropping its first big report in six years—a scientific inventory of the combined knowledge of all the brightest minds in climate science. Needless to say, climate skeptics are not too pleased at such a robust body of science coalescing before the world’s eyes.

Rajendra Pachauri, a septuagenarian economist and engineer from India who has chaired the IPCC since 2002. He oversees a small staff of about 10 people. Those staff help coordinate working groups, each of which can involve up to 800 scientists. Sound tedious? It probably is.

But we’re not convinced that Pachauri spends all of his time during IPCC meetings thinking about climate science. He is the author of Return to Almora, a sultry 2010 novel loaded with group-sex scenes and other such non-scientific escapades. Here are a couple of tantalizing quotes from said novel:

“He was excited by the sight of her heaving breasts, as she breathed in and out deeply.”

“Afterwards she held him close. ‘Sandy, I’ve learned something for the first time today. You are absolutely superb after meditation. Why don’t we make love every time immediately after you have meditated?’.”

What exactly does the IPCC do?

OK. But we asked what it does.

The IPCC assesses the body of published climate science, highlights the most important findings, and shares its findings in assessment reports available to anybody who cares to read them. We hope that includes government officials and politicians. But we already know that it does not include any congressional Republicans, because they find science threatening.

How big are these assessment reports?

Really big. They are sweeping and ambitious—many thousands of pages apiece.

How often do the assessment reports come out?

Well then what was that IPCC report that came out last year?

Hey, you know your stuff. In addition to its headline-grabbing assessment reports, the IPCC publishes occasional shorter reports on more narrow subjects, such as one last year [PDF] that described how global warming is influencing extreme weather events.

OK, so the new, big-deal assessment report is being released when?

AR5 will take more than a year to be fully released. It will be unveiled in four different parts.

How do the four parts differ?

The first one, put together by a team of scientists sexily dubbed Working Group I, covers the physical science of climate change—the really big-picture, controversial stuff about how the weather is changing and how it’s forecast to continue to change. It includes projections on temperature changes, sea-level rise, ocean acidification, and the like. The wonkiest of climate wonks like to call this the WGI AR5 report.

The second part, compiled by—can you guess?—Working Group II, will address the actual impacts of all that climate change, how some communities are adapting to it, and how we all could adapt better. It’s due out in March.

In April, a report compiled by Working Group III will look at mitigation opportunities—what we could do to reduce our climate emissions and slow down the rate of warming.

The final section is what’s called a Synthesis Report. Due in October 2014, it will round up and consolidate the findings from the other three reports.

So part one is being released on Sept. 27?

Actually, only the summary of part one is being released on Friday. It’s officially called the Summary for Policymakers. The full part one will be released the week after.

OMG, they really do drag this thing out.

Yes, they do. But that was not a question.

How are these assessment reports put together?

More than 800 climate scientists serve as authors and review editors in the three working groups. They come from 85 countries, with 301 of them from developing countries. These scientists call on hundreds more scientists for assistance. Together, they diligently mull reams of peer-reviewed climate science.

The results of this collaboration are draft reports that are debated, revised, and refined. For a sense of the exhaustiveness of the reviews, consider this: Working Group I has held 12 meetings in countries all over the world since 2010. It received 21,400 comments from 659 experts on its first draft, and then 31,422 more comments from 800 scientists and 26 governments on its second draft.

What was the deal with the Nobel Prize?

Al Gore and the IPCC shared the 2007 Nobel Peace Price “for their efforts to build up and disseminate greater knowledge about man-made climate change, and to lay the foundations for the measures that are needed to counteract such change.”

Neat. But what’s even neater is that the prize came with a $1.5 million award. Al Gore donated his half to his climate group and the IPCC used its portion to help fund PhD scholarships for climate researchers in developing countries. This research fills gaps in understanding of specific climate fields—such as the melting of snow and ice that blanket the Himalayas.

So even though the IPCC doesn’t produce its own climate science, it does help fund some through the scholarship program.

If the IPCC doesn’t produce its own research, why should I care about its assessment report?

Even if you keep up to date on the latest climate research, perhaps even going straight to the source and reading the scientific literature, your knowledge couldn’t match that of the combined understanding of hundreds of collaborating climate scientists. Some research contradicts other research, and it’s the job of these scientists to reconcile those differences.

The IPCC scientists take almost all of the recent climate research, judge it, and synthesize it to produce succinct conclusions about sea-level rise, hurricanes, ocean acidification, and the like in a warming world.

Wait—why did you just say “almost” all of the recent climate research?

New research is being produced all the time, and the IPCC had to draw a line and exclude research produced after a certain date. For this latest report, that date was July 31, 2013.

Are the drafts kept secret?

They’re supposed to be, but some drafts have been leaked, which has fueled controversies and media coverage, some of which has been deliberately misleading. That pisses off those in charge at the IPCC because the drafts inevitably contain statements and projections that will be changed before the final report is released. That’s why they’re called drafts. “The unauthorized and premature posting” of drafts could “lead to confusion,” the IPCC has warned [PDF]—over and over again, as new leaks have sprung.

What are the major news outlets focusing on?

The stuff that is grabbing the attention of most of the media is passé for the likes of Grist readers: The IPCC is revising up its level of confidence that humans are affecting the climate. In its 2007 report, the group said it was “very likely” (meaning 90+ percent probable) that humans are responsible for climate change. In the new report, it’s expected to say it’s “extremely likely” or “virtually certain” (between 95 and 100 percent probable). Yawn. We could have told you that.

Meanwhile, the IPCC is dedicating a large portion of the upcoming report to the apparent slowdown in the rate at which land surface temperatures are rising. A lot of government officials want to know what’s up with that. Grist has previously covered this issue, explaining, among other things, that oceans have been absorbing a lot of the seemingly “missing” heat.

Why are some climate scientists dissing this report?

Fears abound that the projections included in this latest report, alarming though they may be, will be lowball numbers. While deniers scream that the IPCC is exaggerating the scale of the climate crisis, some climate scientists are saying the report will actually be loaded with understatements.

The New York Times reported earlier this month that scientists’ most extreme projections about sea-level rise appear to have been rejected as “outliers” by Working Group I. But the most conservative, low levels of forecast temperature rise were treated as credible and incorporated into drafts of the report.

Some scientists also question whether these reports, which come out only a couple of times a decade, serve policymakers as well as they could. Now that the basics of climate science are well established and new research is being constantly published, does it make sense to spend years compiling bumper reports? It’s a question that the IPCC is asking itself too. “What sort of products should the IPCC be producing, over what kind of time scale?” IPCC spokesman Jonathan Lynn wondered aloud to a reporter recently. “Do we need this blockbuster report every six or seven years or do we need more frequent reports?”

How are climate deniers responding to the report?

The fossil fuel industry has been working its humanity-wrecking tail off trying to undermine the report’s credibility. Why? Because good science could guide rational climate and energy policy—and that science happens to be providing compelling reasons to reject fossil fuels. This new report is loaded with the best science, and that scares the shit out of the climate deniers.

What sort of attacks are deniers levying?

The most common criticisms we’re hearing from deniers are claims that the IPCC is “admitting” or “confessing” that its previous assessment reports were wrong. Well, gosh, if the IPCC is admitting that it made mistakes in the past, then how could we possibly trust what it has to say now?

It’s all bollocks, of course. Science is constantly evolving. The very essence of the scientific method is to test and improve our understanding of how the world works. Scientists poke at yesterday’s findings, trying to find fault with them so that they can refine tomorrow’s.

Yes, many of the conclusions in the IPCC’s new assessment report will be different from those in the last one. That’s the whole point of this dragged-out process.

Stay tuned to Grist for coverage of the actual contents of the new IPCC assessment report. And maybe we’ll take a look at what some deniers are saying about it too, so we can share a good laugh.