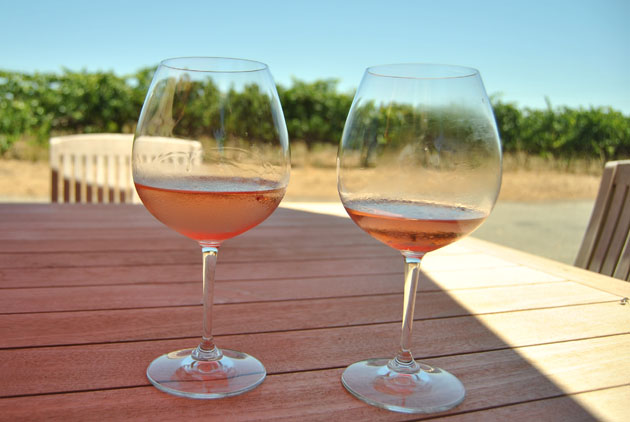 In March of this year, a Gallup poll highlighted an interesting tension in American thinking on global warming: While a majority of respondents said they believe global warming has already begun, a majority also said they don’t expect to suffer any hardships from global warming within their lifetimes. What the survey didn’t ask was how many people across the country are already reacting to rising temperatures—and preparing for those ahead.

This past summer, twenty-somethings Allie Goldstein and Kirsten Howard took a road trip to document stories of what they call “climate resilience”—examples of individuals and communities finding creative ways to adapt to hotter summers, stronger storms, bigger wildfires, rising sea levels, and more. They visited 31 states and offset their minivan’s carbon emissions by purchasing carbon credits from Terrapass. Whether learning about Ann Arbor, Michigan’s newly structured stormwater utility or evaluating the use of public art to mark evacuation routes in New Orleans, Goldstein and Howard found these examples everywhere they looked—suggesting that perhaps the rest of us don’t have to travel far at all to witness similar initiatives being implemented.

In some places, climate change is an explicit factor driving a city’s action; such is the case in Baltimore, Maryland, which has a Climate Action Plan and a recently appointed “Hazard Mitigation and Adaptation Planner” who is trying to build more tree canopy in the city’s neighborhoods so that residents may benefit from increased shade during heat waves. In addition to combating the “urban heat island effect” (increased canopy can cool the city by up to 9 degrees Fahrenheit), planting more trees has a host of other benefits: increasing property values and decreasing crime, according to Goldstein. These “co-benefits” were observed all around the country, Goldstein says, pointing out that sometimes “responding to climate change” is a co-benefit in itself, tertiary to the main goal of attracting tourists or reducing crime.

“When we started this trip,” says Goldstein, “someone told us we wouldn’t find anyone to talk to about climate change in the south.” That prediction proved false. “There are definitely people who are still skeptical of the science or don’t really believe that the impacts of climate change will come to their community in particular, but in general we found that this kind of politicized, black and white, ‘believe or don’t believe’ thing that’s presented in the news a lot is really a lot more nuanced than that.”

On the coast of North Carolina, they met Todd Thompson, the Chairman of the Board of NC-20, a conservative organization that Stephen Colbert poked fun at in 2012. Thompson may be “skeptical” of projections of a 39-inch sea-level rise in his area, but his objection to the plans to prepare for it—elevating homes, raising flood insurance rates—has more to do with his concerns about impoverishing the community, Goldstein and Howard write on their blog. “My view of the world,” he tells them, “is as someone who has seen a lot of poverty… I just love this area and I want to protect it.”

Goldstein and Howard have also talked to Colorado fruit growers who are adapting to fluctuations in temperature without necessarily agreeing on the cause of the changes. “The farmers we spoke with, for the most part,” they write, “aren’t attributing the longer growing season to climate change.” The farmers view fluctuating weather patterns as normal. But in response to the latest variations, they are diversifying their harvests in anticipation of losing some crops each season, and using wind machines to nudge the air temperatures in the fields by half degrees to prevent freezing.

Howard tells me she was “amazed by the number of places where at the municipal level they had some sort of effort to actually identify their climate variability and predict what the local impact to their communities would be.” The great takeaway from this project, she says, seems to be that “people are really in touch with ‘their place.'” Even if they aren’t concerned about climate change on a global scale or they think it doesn’t affect them, “once you get down to talking about their neighborhoods, their cities, they know so much… and are, in a lot of cases, working really hard to make it the best place to live.”

Changing attitudes toward climate change on a larger scale were evident at the 7 national parks Goldstein and Howard visited. At Montana’s Glacier National Park, for example, more and more tourists are attracted precisely because of scientific estimates that the park’s glaciers will be gone by 2030. In addition, learning about glacial retreat is now an integral part of the visitor experience at GNP. On their blog, Goldstein and Howard quote a National Park Service staff member who gives weekly presentations titled “Where Have All the Glaciers Gone?” and said: “At first, [the Park Service’s] attitude was, ‘people are on vacation, don’t upset them by talking about global warming.’ Now, we have a mandate to talk about it.”

Besides communicating more explicitly about the effects of global warming, Park Service staff are also initiating ecological interventions—”perhaps a little more heavy-handedly than they have in the past,” Goldstein and Howard write. In 2003, the Park Service deliberately directed a forest fire away from the region’s huckleberries, which bears eat; to prevent invasive species from reaching the park’s Quartz Lake, they constructed a barrier in Quartz Creek.

It’s a similar story at Joshua Tree National Park in California, where, like Montana’s glaciers, Joshua Trees are disappearing. Park Service specialists are trying to better understand the factors determining survival and death of the trees, and they’re also weighing some drastic interventions to preserve the tree population, such as manually relocating trees to areas with “future favorable climates.” 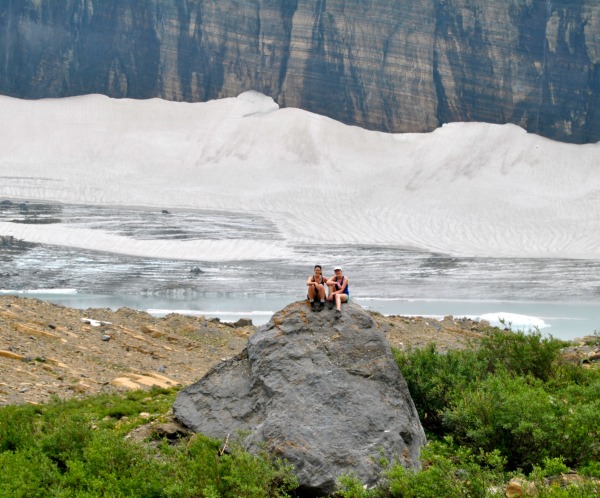 Goldstein and Howard in Glacier National Park. “Though beautiful, the hike feels a bit like a hospice visit,” they write.

It would be a shame for these parks to lose their namesakes, but Goldstein and Howard’s observations across America suggest that cities and towns may be better poised to adapt to climate change than wilderness areas are. The stories from the cities seem hopeful; the dispatches from Glacier and Joshua Tree, less so. Perhaps that is because existential threats—changes that would alter the defining characteristics of a place—are more difficult to contemplate before they occur. Who would have thought, ten or twenty or fifty years ago, that a glacier-less Glacier National Park was possible?

In Napa Valley, though, exactly that kind of forethought is taking place. The region is well-known as wine country. Local vintners, write Goldstein and Howard, formed a climate task force in 2006 to meticulously track temperature changes and develop strategies to manipulate microclimates in the vineyards. They installed weather stations in the vineyards, sifted through farmers’ harvest logs from past decades, and are even testing solar-powered sensors on their vines to monitor plant hydration day by day. What they have found is, so far, a much slower progression in temperatures in Napa Valley than has been measured elsewhere, allowing growers to put scientists’ projections into context, and gauge when it might be time to start switching cultivars. They’re doing their homework, in other words, and providing a standout example of what it takes to stay ahead of existential threats — climate change may mean the end of glaciers, but it won’t, hopefully, mean the end of California wine.