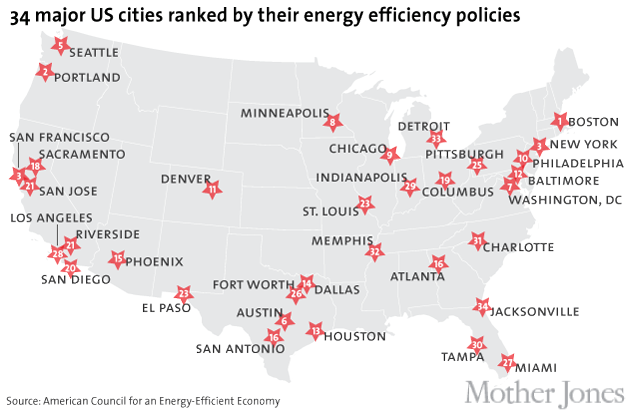 Does your city have a plan to cut greenhouse gas emissions dramatically? Is it seeking to reduce car use through bike share programs and public transit subsidies? Does it partner with utility companies to help small businesses and homeowners save energy? And does it lobby for statewide energy-efficiency legislation?

Those are just a few of the policies that have made Boston the top-ranked city for energy efficiency, according to a new report from the American Council for an Energy-Efficient Economy. Portland, Ore., placed second, followed by New York, San Francisco, and Seattle.

ACEEE ranked 34 major American cities—the 25 most populous incorporated ones, plus the central cities of nine other major metropolitan areas—according to their efforts to promote energy savings. The report looked at building codes, community-wide energy initiatives, transportation policies, energy-saving programs involving public utilities, and efforts to improve the efficiency of government building. You can see where each city ranked on the map above.

The cities’ scores are based largely on their implementation of efficiency policies—enforceable building standards, for instance—rather than on quantifiable reductions in energy use and emissions. During a conference call following the release of the report, ACEEE official Eric Mackres said the report focused on specific policies because the group wanted it to serve as a “playbook of actions you can take to improve efficiency.” He added that “because most cities aren’t as good at promoting energy efficiency as Boston and Portland, we don’t have as good of data on energy savings [and] energy consumption…and as a result, we weren’t able to compare all of the cities in the scorecard using those energy metrics.”

Most cities did substantially worse than the top performers. While Boston received 76.75 of the possible 100 points, 23 cities earned fewer than 50 points. Jacksonville, Fla., finished dead last with only 17.25 points. The Sunshine State is also home to two other cities—Miami and Tampa—that finished in the bottom 10. Mackres pointed to several factors that led cities to score poorly, including a lack of support from some state governments and a lack of knowledge about the issue on the part of city policymakers. “A number of cities at the bottom [have] taken a variety of actions, but in a lot of cases they’ve been piecemeal and not tied into a broader strategy,” he added.