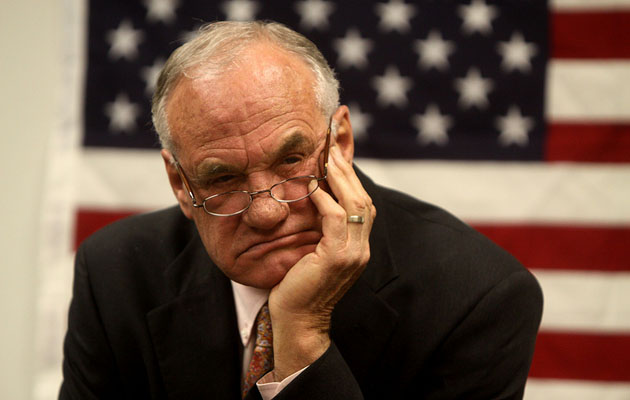 The name Barry Goldwater is practically synonymous with conservatism in America. That’s even more true in the late politician’s home state of Arizona, which he represented for five terms in the US Senate. Now his son, Barry Goldwater Jr., is putting the family name behind an effort to protect solar energy’s growing share of the electricity market—a struggle that has pitted him against entrenched utility interests and a right-wing dark-money group.

Goldwater, 74, is the chairman of Tell Utilities Solar Won’t Be Killed (or TUSK, for short), a group launched in March to fight the state’s largest electric utility, Arizona Public Service, on solar power. APS has been campaigning to get the state utility commission to change regulations dealing with net metering, a policy that allows homes and businesses with their own solar power systems to send excess energy they generate back to the grid and make money off of it. Forty-three states and the District of Columbia have a net-metering policy in place.

Arizona has had net metering since 2009, which has helped make it the second-ranked state in the country in installed solar capacity. But APS has called for an overhaul of the state’s net-metering policy and plans to unveil its proposal to the regulators on the Arizona Corporation Commission this Friday.

APS argues that under the current arrangement, the 18,000 Arizonans with rooftop solar aren’t paying enough to cover the cost of maintaining the grid. Even if a house has a solar system, it still uses the utility’s infrastructure. It pulls energy from the grid when the sun is not shining and feeds energy back into the grid when the solar unit is generating more power than the house needs. The utility wants to lower the rate that it pays for solar power produced by these rooftop solar generators, or otherwise recoup the costs. “Our only point is that anybody who uses the grid should pay their fair share of the grid,” said APS spokesman Jim McDonald.

Opponents, however, say reducing the incentives for rooftop solar will make it a less appealing investment. They argue that APS is going after net metering because it is worried that solar might start to cut into its profit margins, as fewer homeowners are buying from the grid and more are selling to it. McDonald said net metering has “zero impact” on the utility’s profit margins right now—but it could down the line. “Eventually would it become a business issue? It probably would,” he said.

Enter Goldwater. TUSK’s sole concern is protecting net metering, and it has brought together solar industry and other business groups to push back against APS. If APS is successful, said Goldwater, “they may very well kill rooftop solar in Arizona, and that would be a tragedy.”

A politician in his own right, Goldwater represented California in the US House of Representatives from 1969 to 1983. (He still lives in California, though he is active in Arizona-based conservative organizations like the Goldwater Institute, named after his father.) His support for solar, he said, comes from conservative, free-market principles rooted in “creating choices for the American consumer.”

TUSK’s campaign includes a web video of a large gorilla beating up a smaller one as a booming voice condemns the utility monopoly for “trying to kill the independent solar industry in Arizona.”

“Choice means competition. Competition drives prices down and the quality up,” Goldwater told Mother Jones. “The utilities are monopolies. They’re not used to competition. That’s what rooftop solar represents to them.”

TUSK’s campaign to date has been creative, to say the least. It includes a web video of a large gorilla beating up a smaller one as a booming voice condemns the utility monopoly for “trying to kill the independent solar industry in Arizona,” before Goldwater comes on screen to say that it’s “not the American way, it’s not the conservative way.” Another ad features a song about APS sung to the tune of “Total Eclipse of the Heart.” (Chorus: “They don’t think consumers are that smart.”) The group has also been running ads on the Drudge Report and conservative radio in the state.

The public relations company behind the campaign is Phoenix-based Rose + Moser + Allyn, led by Jason Rose, a well-connected member of the state’s Republican establishment. Rose’s wife, Jordan, is the founder of Rose Law Group, which represents California-based SolarCity, the county’s largest installer of rooftop solar. One environmentalist in the state described Rose, 42, to me as “a hip, young, ultra-right-wing PR guy.”

I asked Rose whether he thought the description fit. “I will gladly accept that moniker,” he replied. The group hired a Republican polling firm in March to survey likely voters on solar and found that 88 percent of all voters in the state—and 76 percent of Republicans—supported net metering.

“I think solar has just relied on the left for so long, and it hasn’t made a strong intellectual effort to the right. And it should,” Rose said. “Because it’s entirely consistent with that more libertarian, free-market strand of the Republican Party.”

Rose thinks that Arizona is the leading edge of a solar renaissance among conservatives. “Arizona might be the key focus group on this, and might be a leading indicator of a future shift in Republican attitudes not just in Arizona, but across the country,” he argued.

But his group is getting push-back from APS and its allies—most of which are also conservative. The utility is a major donor to Republican causes in the state, giving $25,000 to the Republican Victory Fund in the 2012 election, according to the Arizona Department of State records. Republicans have long held the majority in the state Legislature. The two renewable-friendly Democrats on the Corporation Commission, which will ultimately decide whether or not to approve APS’s net-metering plan, lost reelection bids last fall, leaving an entirely Republican commission. APS has pretty entrenched supporters in the state.

“APS wields a lot of power,” said Tom Mackin, president of the Arizona Wildlife Federation, which isn’t involved in the net-metering fight but has worked on renewable energy issues in the state. “They pretty much get what they want.”

Last week, the national conservative group 60 Plus Association entered the Arizona fight as well, with a website and web ads decrying “corporate welfare” for solar energy and raising the specter of Solyndra, the solar panel company that went bankrupt in 2011. 60 Plus bills itself as the conservative group representing senior citizens (the anti-AARP, if you will). As a 501(c)(4), the group does not have to disclose its donors. It made big outside expenditures on Republicans in 2012. While 60 Plus has weighed in on a federal renewable energy standard in the past, claiming it would be bad for senior citizens, this appears to be the first state issue the group has taken on.

Renewable advocates have accused APS of funding the 60 Plus campaign, a charge that APS flatly denied in an interview with Mother Jones. But the group’s involvement is perhaps a sign of just how much attention is being paid to the net-metering fight in Arizona. Bryan Miller, president of the advocacy group Alliance for Solar Choice, recently deemed it “the most significant fight for solar in the country.”

That’s why renewable energy advocates in the state say that having a voice like Goldwater’s involved is changing the game. “It really does make a big difference when a group like TUSK comes out and they say directly, ‘Look, the utilities are trying to kill solar,'” said Nancy LaPlaca, a Phoenix-based energy consultant.

Goldwater paints the fight to keep net metering as going to the very heart of Republican values. “Conservatives believe in individual freedom, in choice, in competition,” he said. “We believe all of those things allow people to live a better life—to be able to choose what they want to do and not have a monopoly, or in the case of government, big government, telling them how to live their life. So it’s a very natural place for a conservative to be. I think as time goes buy you’ll see more and more Republicans vocalize this.”