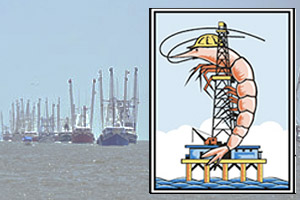 The BP oil disaster has been brutal for Harlon Pearce, the owner of Harlon’s LA Fish & Seafood, one of Louisiana’s largest seafood processors. Pearce is now paying 20 percent more than he did three months ago for his fresh, locally harvested shrimp and oysters—when he can get them at all. On many days he runs out of them and is forced to tap his dwindling frozen stockpile. At the same time, the nation’s appetite for his famous shellfish and snapper has been sapped by fears of oil contamination. Pearce says it could take years for his business to bounce back. “Our brand is what’s gonna get killed in this whole deal,” he says.

As the chair of Louisiana’s Seafood Promotion and Marketing Board, Pearce is scrambling to protect himself and his industry from the spill, which he blames on BP for “not doing their job correctly.” He’s promoting better tracking of the Gulf catch for contamination and planning a national PR campaign to show that Louisiana seafood is safe to eat. He’s doing everything except what might seem to be the most obvious thing: supporting the Obama administration’s now-suspended ban on deepwater offshore oil drilling.

“I am not in favor of the moratorium,” Pearce explains over the phone from Kenner, just west of New Orleans. “You’ve got to be down here to see and feel what I’m telling you. It’s our brothers, uncles, and cousins that are working in the oil industry.”

Last year, Louisiana’s commercial fishermen caught 30 percent of the domestic seafood consumed in the United States and contributed $2.4 billion to the state economy. Now its 13,000 fishermen are reeling from the spill’s environmental and economic impacts. Crab catches are off by 40 percent, shrimp by two-thirds, and commercial oysters could be wiped out by efforts to pump more freshwater into their brackish habitats to keep the oil at bay. Seventy percent of the Gulf remains open to fishing, but captains have been spending much of their time laying oil containment boom rather than fishing nets.

Nonetheless, since it was announced seven weeks ago, the six-month drilling moratorium has prompted an outcry among the very crabbers and shrimpers that it was meant to protect. (A federal judge in New Orleans struck down the moratorium on Tuesday; the Obama administration is appealing his ruling.) The Seafood Promotion and Marketing Board says it hasn’t heard from a single Louisiana fisherman who wants to stop oil drilling on the deepwater rigs, which employ between 6,000 to 8,000 people. “If you’ve seen Grand Isle or those [other fishing communities], you’ve seen how much oil and gas and seafood coexist in this state,” says Ewell Smith, the board’s executive director. Emerging from a discussion on the drilling ban held on Tuesday by the Louisiana Oil and Gas Association, the state petroleum industry’s trade group, Smith paints the ban as a costly overreaction: “If a Delta airline plane crashes, do you shut down the entire industry, much less shut down just Delta? You don’t do that. You’d cripple the entire nation’s economy. And that’s kind of what we’re doing here.”

In addition to supporting more drilling, Louisiana’s commercial fishing interests have declined to back recent bills in the legislature that would have made it easier to for the state to go after BP. Bills that would have enabled Louisiana to extract punitive damages from the company and tax it to pay for coastal restoration failed to pass this week before state legislators adjourned for the summer. “That’s not a fight that we want to pick up,” says Eric Sunstrom, a lobbyist for Harlon’s LA Fish & Seafood and the Louisiana Bowfishing fishermen’s Association. “Other folks can fight that fight. We just want to take care of the fishermen, make sure the industry gets back up, and make sure our brand and our market isn’t wiped to imported seafood—that’s the biggest problem.”

“Louisiana, we’re known for our seafood and our culture and stuff, but it’s really an oil state.”

Rather than pushing for regulatory changes or legal challenges to BP, the Seafood and Marketing Board has focused on pressuring the company to commit $457 million over 20 years to a program that would market the state’s seafood while ensuring that it’s safe to eat. So far, BP has given the board $2 million for “crisis communications,” Smith says, but hasn’t committed to anything more.

The close relationship between Louisiana’s seafood and oil industries goes back to the 1930s, the earliest days of offshore drilling, when Texas prospectors hired Cajun fishing boat captains to help them find and tap pools of crude. It wasn’t always a perfect relationship. “They would call them ‘damn Texians,'” says Louisiana State University historian Donald Davis, the author of Washed Away? The Invisible Peoples of Louisiana’s Wetlands. The newcomers danced with local women without asking, were Baptists who claimed to not to drink (even though they did), and expected bribes in return for jobs. “The locals just didn’t understand those people, they were so different,” Davis says. “But those people began to adapt Cajun culture, instead of the other way around.”

In the following decades, the two industries have developed a comfortable, sometimes symbiotic coexistence. Pearce says the best fishing is often around the artificial reefs created by new and abandoned rigs. And when fish prices are low or the catch is down, people flock to the rigs for temporary work; when oil prices dip, they go fishing. Shell Oil is a longtime sponsor of the annual Shrimp & Petroleum Festival in Morgan City, whose website says it will prove “that oil and water really do mix.” Fishermen praise Shell for its largesse following Hurricanes Katrina and Rita, when it gave them close to $1 million in direct grants and funding for critical infrastructure. “That was the first actual money fishermen got in their hands following Katrina—before the state or federal government,” Smith says. “They literally put one of our fishing communities back on the map overnight.”

“There is a back and forth relationship there,” Pearce says. Yet the seafood industry is dwarfed by the oil industry, which pumps a $65 billion into the state economy annually and directly supports around 60,000 jobs. Likewise, the fishing industry’s political influence in the state capital is relatively weak, says Darrell Hunt, the Sierra Club’s Louisiana lobbyist. “They’re only engaged in so far as their elected officials stand up for them,” he says.

“Louisiana, we’re known for our seafood and our culture and stuff, but it’s really an oil state,” says Pat Fahey, the co-owner of AmeriPure, one of the state’s largest oyster packing companies. Last Friday, he had to cease operations and lay off 48 workers. He personally supports a drilling moratorium—so long as it doesn’t get “mired down” in bureaucracy or shut down the rigs for too long. “Let’s get out there, figure out which of these wells are being run competently, and let them reopen.”

Despite the massive hit to its bottom line, for now the fishing industry seems willing to give the oil industry a pass. Sunstrom, the fishing lobbyist, views the BP disaster as an isolated incident, not a reason to rethink how the state will prevent the next big spill. “When you think of how long we’ve been drilling in the gulf, and you have something like this happen,” he says, “I personally just consider this a really, really shitty accident. I mean, it’s terrible. And there may be some fault—safety problems or whatever—but this is not something that happens every 5 or 10 or 15 years. This is just a really bad tragedy that just happened. And now we have to try and recover from it.”