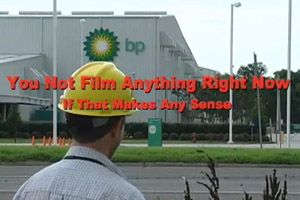 Everyone knows by now that BP is still blocking press access to oil-spill sites even though they’re not supposed to anymore. I’ve been blathering about it for weeks, and it’s been all of three days since four contractors wouldn’t let me through the Pointe Aux Chenes marina outside Montegut, Louisiana. And though as of June 16 the federal government was saying helicopters could fly reporters as low as 1,500 feet around spill sites, on June 17 I was on a helicopter that was prohibited from flying below 3,000 feet (and whose pilot flipped silent birds at the “military guys” coming over the radio and hassling him about being in the area at all). But a Louisiana sheriff’s deputy* pulling over a video camera-wielding private citizen because the head of BP security wanted to ask him some questions is a whole other level of alarming.

Last week, Drew Wheelan, the conservation coordinator for the American Birding Association, was filming himself across the street from the BP building/Deepwater Horizon response command in Houma, Louisiana. As he explained to me, he was standing in a field that did not belong to the oil company when a police officer approached him and asked him for ID and “strongly suggest[ed]” that he get lost since “BP doesn’t want people filming”:

Wheelan: “Am I violating any laws or anything like that?”

Wheelan: “Well, I’m not on their property so BP doesn’t have anything to say about what I do right now.”

Officer: “Let me explain: BP doesn’t want any filming. So all I can really do is strongly suggest that you not film anything right now. If that makes any sense.”

Not really! Shortly thereafter, Wheelan got in his car and drove away but was soon pulled over.

It was the same cop, but this time he had company: Kenneth Thomas, whose badge, Wheelan told me, read “Chief BP Security.” The cop stood by as Thomas interrogated Wheelan for 20 minutes, asking him who he worked with, who he answered to, what he was doing, why he was down here in Louisiana. He phoned Wheelan’s information in to someone. Wheelan says Thomas confiscated his Audubon volunteer badge (he’d recently attended an official Audubon/BP bird-helper volunteer training) and then wouldn’t give it back, which sounds like something only a bully in a bad movie would do. Eventually, Thomas let Wheelan go.

“Then two unmarked security cars followed me,” Wheelan told me. “Maybe I’m paranoid, but I was specifically trying to figure out if they were following me, and every time I pulled over, they pulled over.” This went on for 20 miles. Which does little to mitigate my own developing paranoia about reporting from what can feel like a corporate-police state.

The media liaison for the government-run Deepwater Horizon Response Joint Information Center told me BP would get back to me for comment on the incident. I’m still waiting.

* Correction/Update: This story originally stated that a Louisiana state police officer pulled Wheelan over, per Wheelan’s recounting of the incident. My apologies to the state police for misreporting their involvement. After many calls made and messages left, I’ve finally confirmed that the cop in question was actually a sheriff’s deputy for Terrebonne Parish. The deputy was off official duty at the time, and working in the private employ of BP. Though the deputy failed to include the traffic stop in his incident report, Major Malcolm Wolfe of the sheriff’s office says the deputy’s pulling someone over in his official vehicle while working for a private company is standard and acceptable practice, because Wheelan was acting suspicious and could have been a terrorist.