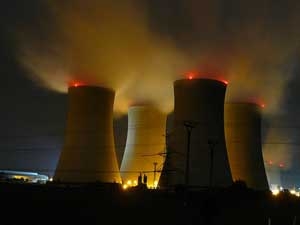 In September 2007, the city of San Antonio and NRG Energy announced a partnership to build two new nuclear reactors—the first new nuclear project to be initiated in the United States in decades. The project represented, one of the partners promised, “a milestone for our long-term energy future.”

The project, initially estimated to cost $5.8 billion, quickly became a leading candidate for a Department of Energy (DOE) program in which the government would guarantee loans to finance new nuclear plants. In less than a year, however, the plant’s projected cost had more than doubled to $13 billion. By April 2009, an independent report had calculated that the real cost of the plant could be as high as $22 billion. In December, San Antonio’s municipal utility, CPS, announced it was bailing out of the venture entirely and suing NRG, arguing that NRG and Toshiba—which was contracted to construct the reactors—had lied about the price tag of the venture.

After this debacle, one would think the government would be wary about underwriting projects with such dicey finances. Yet the Obama administration’s 2011 budget proposes tripling the loan guarantee program—from the $18.5 billion that Congress has already approved to $54.5 billion. The program’s expansion is just one of several signs that the Obama administration is throwing its muscle behind the nuclear industry’s push for a massive expansion.

“We are aggressively pursuing nuclear energy,” said Energy Secretary Steven Chu on Monday when he rolled out the department’s budget proposal. Several days earlier, Chu had unveiled a blue-ribbon panel to assess nuclear waste disposal, seen as one of the most significant barriers to a nuclear revival. And in his State of the Union address Obama argued that creating new clean energy jobs “means building a new generation of safe, clean nuclear power plants in this country.”

But as Mother Jones has reported, there will be no nuclear renaissance unless the US taxpayer covers the tab. While the country’s 104 nuclear power plants currently produce nearly 20 percent of American electricity, growth has flatlined in the past three decades. Even as public opinion toward nuclear power has warmed, projected construction costs for new plants have soared, with a single reactor now estimated to cost as much as $12 billion. In fact, the outlook for nuclear plants looks so dire that even Wall Street banks have balked at financing them unless the government underwrites the deal.

Of course, that means the government would also assume almost all the risk. The chances of default on the government-backed loans are “very high—well above 50 percent,” according to the Congressional Budget Office. “If they go belly-up, taxpayers get to pay it,” said Kevin Kamps, radioactive waste specialist at Beyond Nuclear. “With hundreds of billions in bailouts already on the shoulders of US taxpayers, the country cannot afford to move forward with a program that could easily become the black hole for hundreds of billions more,” wrote the heads of the National Taxpayers Union, Taxpayers for Common Sense, the George C. Marshall Institute, and the Nonproliferation Policy Education Center in a letter to the administration [PDF] this week.

Chu estimated on Monday that tripling the loan program could help launch seven to ten new nuclear facilities. That seems overly optimistic. When the program was first launched, its supporters claimed that the 18.5 billion in loan guarantees would help launch as many as five new projects. Thanks to steadily rising cost projections, it’s now expected to cover—at best—just two. And the leading contenders for government backing are all mired in controversy. The San Antonio plant is in jeopardy thanks to its soaring price tag (NRG has said it won’t go ahead without a government-backed loan). Plans for plants near Augusta, Georgia, and Columbia, South Carolina, are on hold after federal regulators discovered major safety concerns in the design proposal for the reactors. A proposal for a plant in Calvert Cliffs, Maryland, would use a design from French nuclear power company Areva that nuclear regulators in France, Finland, and the United Kingdom have said has “a significant and fundamental nuclear safety problem” with its instrumentation and control system. “Even their top candidates are very flawed proposals,” said Kamps. “You can just go down the list, and they’ve got problems—safety design problems, concealment of actual price tag.”

With the leading projects in dissary, why is the Obama administration rushing to put billions on the line to encourage new construction? The industry has been trying to get Uncle Sam to bankroll its comeback for more than a decade. Between 1999 and 2009, the industry poured more than $600 million into lobbying for its cause and spent almost $63 million on campaign contributions, according to a recent analysis from the Investigative Reporting Workshop at American University. Republicans have long championed nuclear power, putting forward legislation that would call for the construction of 100 new nuclear plants in the next two decades. But the nuclear lobby’s most ambitious goals were often stymied by Democrats in Congress—until Obama was elected and his administration began the push for climate bill.

With the prospects for cap-and-trade legislation looking increasingly precarious, Democrats are hoping to entice Republicans with major support for nuclear power. The Senate energy bill approved by the Energy and Natural Resources Committee last June would create a Clean Energy Deployment Administration (CEDA) within the DOE that could distribute a virtually unlimited number of loan guarantees without any congressional oversight. Republican Sen. Lindsey Graham (S.C.), who is working with Sen. John Kerry (D-Mass.) and Joe Lieberman (I-Conn.) on a climate and energy package, has made additional subsidies for nuclear a centerpiece of his efforts. This week The Hill obtained a draft of the three senators’ legsilation. It calls for $100 billion in loan guarantees, with $38 billion of that sum designated for nuclear projects.

At the same time, the industry has stepped up its efforts to woo influential Democrats. In the first half of 2009, NEI dispensed a total of $99,000 to 63 candidates—60 percent of that to Democrats. “It has been a very concerted campaign, a very well-funded campaign, and it’s beginning to pay off,” said Ellen Vancko, a nuclear energy expert at the Union of Concerned Scientists.

It’s also worth remembering that the Obama camp has long-standing ties to the nuclear industry. As a senator, Obama wrote an unsuccessful bill that would have required nuclear power plant owners to notify state and local authorities of small radiation leaks—but then watered down the legislation significantly at the industry’s behest. And nuclear interests have been keen boosters of his political career: Executives and employees of Exelon, the Illinois-based utility that produces approximately 20 percent of the country’s nuclear power, donated nearly $210,000 to Obama’s presidential campaign, according to CQ Moneyline. In fact, Obama’s chief of staff, Rahm Emanuel, helped broker the merger of two utiltilies to form Exelon in 2000 when working as an investment banker at Wasserstein Perella & Co. Obama’s chief political strategist, David Axelrod, consulted for an Exelon subsidiary periodically between 2002 until he started working on the Obama campaign. Exelon officials Frank M. Clark and John W. Rogers Jr. have been among his biggest fundraisers, and Obama has also received donations from John Rowe, Exelon’s chairman. Rowe also heads NEI, is a key player in a business-environmental coalition pushing for climate legislation, and has been selected to serve on the DOE’s panel on nuclear waste.

Environmental groups warn that if the Obama administration sinks large sums into nuclear power, it will come at the expense of other energy sources that are both cheaper and more effective at combating pollution. In a 2009 study, economist Mark Cooper, senior fellow at the Institute for Energy and the Environment at Vermont Law School, found that building and operating 100 new nuclear reactors—as some Republicans have advocated—would cost $1.9 trillion to $4.1 trillion more over the life of the reactors than generating the same amount of electricity from renewable energy and energy efficiency measures. Investing the same amount in renewable energy by 2030 would cut at least twice as much carbon pollution, according to a study by Environment America.

But the Obama administration appears to be putting its money on a nuclear expansion—so much so that Graham recently remarked that Obama’s Department of Energy is the most helpful he has worked with on nuclear issues during his congressional career. And Chu’s comments on the energy budget certainly affirmed that view. New reactors “have to be a very important part of our clean energy mix in the coming decades,” Chu said. “We are, as we have repeatedly said, working hard to restart the American nuclear power industry.”