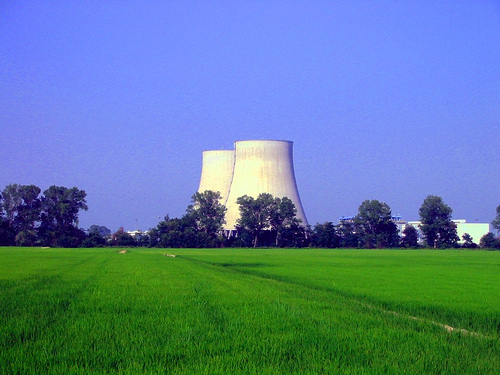 Lindsey Graham (R-S.C.), a nuclear champion who is leading efforts to pass energy and climate legislation on the conservative side of the aisle, described the Obama administration on Wednesday as the most pro-nuclear of those he has worked with during his two terms in the Senate. Graham told reporters that Obama’s energy secretary, Steven Chu, has “probably been the easiest secretary of energy to work with since I’ve been up here,” adding, “He’s a very pro-nuclear guy.”

Graham said that Chu had been “incredibly helpful” in heralding the “nuclear renaissance” Graham wants to bring about. Chu has headed efforts to speed up the nuclear loan gaurantee program, which Graham would like to see expanded in a climate and energy bill. The loans would use taxpayer dollars to back a massive expansion of nuclear power that the private sector has been reticent to support given the expense and high default rate for these investments. Graham also wants to see nuclear power included in the new federal renewable electricity standard, which would require utilities to drawn a percentage of their power from renewable sources. Including nuclear concerns many environmental advocates because nuclear energy is neither renewable nor a new technology, and the RES is intended to boost use of energy sources that are actually renewable, like wind and solar.

Chu has been at the forefront of the administration’s efforts to expand nuclear power, and has been working to set up a blue-ribbon commission that will focus on nuclear fuel issues. And while some Republicans have been critical of Chu for not moving fast enough on nuclear, he has promised to do more. “I’m pushing it as hard as I can,” Chu told senators last week.

President Obama, too, gave the nuclear industry top billing in the energy portion of his State of the Union address on Wednesday night, to the surprise (and chagrin) of some environmentalists.  He began his remarks on climate with a call for “a new generation of safe, clean nuclear power plants in this country.” (That didn’t stop the Viriginia’s Republican Gov. Bob McDonnell from accusing the administration of “hindering nuclear energy expansion” in his rebuttal.)

Environmentalists also criticized Obama for explicitly voicing support for oil, gas, coal, and biofuels in his speech—with no mention of wind, solar, or other renewable sources of energy. “President Obama’s support for all these dirty energy sources was a big win for corporate polluters and their Washington lobbyists, but it was a kick in the gut to environmentalists across the country,” said Erich Pica, president of Friends of the Earth.