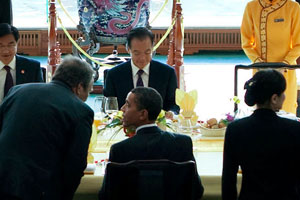 The Chinese premier Wen Jiabao will meet one-on-one with President Barack Obama soon in Copenhagen to try to reach agreement on a new international climate treaty, according to He Yafei, the vice chairman of the Chinese Foreign Ministry.

“Yes, I believe so,” responded He in the hallways of Copenhagen’s Bella Center, when he was asked if Wen and Obama, the heads of government of the world’s two climate superpowers, would meet to resolve outstanding differences.

Wen, whose country is the world’s largest emitter of greenhouse gases on an annual basis, arrived in Copenhagen yesterday for the UN climate summit. Obama, whose country is the world’s largest emitter on a cumulative basis, is due to arrive in time for the summit’s concluding sessions on Friday, December 18. Together, the two countries are responsible for 42 percent of the world’s annual emissions, making their actions crucial to the effort to combat global warming.

In a major break from past climate change diplomacy, Obama and Chinese president Hu Jintao agreed in Beijing in November that both nations would limit their future emissions—the first the two climate superpowers had made that promise to the international community—and also that they would work together for a successful outcome to the Copenhagen summit.

“Anything more than that, and we’ve had it,” said Mohammed Nasheed, the president of Maldives.

At a press conference this afternoon in Copenhagen, He said that, according to Premier Wen, the final text of the agreement under discussion in Copenhagen could include a limit of 2C as a “long-term,” aspirational goal. But “to make it a balanced approach,” He added, the text should make it clear that the fight against poverty is to remain the top priority for developing countries.

Responding to an American demand for transparent verification of China’s promised future emissions cuts, He said that China was ready to engage in “dialogue and co-operation that is not intrusive, that does not infringe on China’s sovereignty.”

Meanwhile, at a press conference held immediately before China’s, a leading US Member of Congress on climate issues, Henry Waxman of California, the co-sponsor of the Waxman-Markey bill that passed the House of Representatives over the summer, contradicted mainstream science by repeatedly asserting that the emissions reductions the Obama administration has pledged are “completely consistent” with the 2C limit.

“The targets we set out in our legislation, and that the President has articulated—a 17% cut in emissions by 2020 and an 85% reduction by 2050—are consistent with what the science says is needed to prevent the [world from crossing] tipping points and the dire consequences that would bring,” Waxman told the press conference. Crucially, these proposed cuts on the part of the US, which await action by the US Senate, are based on a 2005 baseline. When compared to the 1990 baseline that is the international standard, the proposed US cuts amount to a mere 4 percent by 2020.

The UN’s Intergovernmental Panel on Climate Change and other leading scientific bodies around the world have concluded that reductions of 25 to 40 percent from 1990 levels by 2020 are necessary to give the world a meaningful chance to limit temperature rise to 2 C.

But as the summit approaches its final 24 hours, the difference between the proposals on the table and established climate science remains vast. A document leaked this afternoon from the United Nations agency organizing the summit, the UN Framework Convention on Climate Change, stated the the proposals currently on offer will lead to an estimated global temperature rise of 3 degrees Celsius over pre-industrial levels, well beyond what scientists believe is safe and what virtually all governments assembled here rhetorically support. The governments of the US and other members of the Group of 8 rich industrial countries pledged in July 2009 to limit global temperatures to 2 Celsius. More than 100 nations, mainly the poor and island states that are most vulnerable to sea level rise and other impacts of climate change, have called on the Copenhagen summit to endorse a goal of 1.5Celsius.”That is the determination we have made,” Waxman responded in the hallway after the press conference when asked about the contradiction between his statement and the prevailing scientific consensus. “Many environmental organizations have said that [our goals] are consistent [with 2 C]. And as Congressman Markey just said, I think we may actually end up doing much more than is projected once we get going. The important thing is to get started.”

“We’re trying to find a way to work together for the betterment of the planet,” Pelosi told the press conference. Noting that she had visited China in May and been “very impressed” by its progress in solar and other alternative forms of energy, Pelosi indicated that China’s recent pledge to reduce the energy intensity of its economy 45 percent by 2020 was a sign of progress. “China is still a net emitter, but without these [alternative energy] measures, things would be much worse.”

Earlier in the day, US Secretary of State Hillary Clinton announced that the US would “work toward” the provision of $100 billion in aid to developing countries to help them shift to low-carbon energy and to adapt to the impacts of climate change, and that the US would pay “its fair share.” But Clinton gave no further details about how much of the $100 billion would come from the US, how much would be new money rather than a reshuffling of existing commitments and how much of it might come from private sector investments.