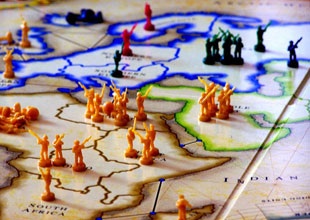 With the Copenhagen talks at an impasse, President Barack Obama and the leaders of other developed nations have deployed a divide-and-conquer strategy. Until now, poorer countries have presented a united front, calling for major long-term investments to help vulnerable nations deal with climate change, and a more ambitious effort to slow the warming of the planet. But industrialized nations are unwilling to make such commitments, and are now seeking to break that alliance by picking off countries one by one.

Late on Tuesday, the governments of Ethiopia and France announced that Ethiopia, “representing Africa,” had agreed to adopt an “ambitious agreement” that would call for limiting the average global temperature rise to 2 degrees Celsius. Previously, the African bloc, along with the G77 coalition of poor countries and the Alliance of Small Island States, had firmly insisted that a 1.5 degree limit was imperative to prevent dire consequences in their regions, which are especially vulnerable to climate change. Some observers see the France-Ethiopia side deal as a breakthrough that could bring developed and developing nations closer to a final agreement. But others view it as an attempt to drive a wedge through the bloc of developing nations in pursuit of a weaker deal that won’t protect the most at-risk nations from harm.

Ethiopia’s break with its fellow developing nations is significant because of the central role it plays in the African bloc. Ethiopia chairs climate efforts for the 53-nation African Union and is also home to its headquarters. Ethiopian Prime Minister Meles Zenawi is the coordinator of African Heads of State and Governments on Climate Change. “I know my proposal will disappoint some Africans,” said Zenawi on Tuesday. “It scales back the ambition in return for more reliable funding and a seat at the table in the management of any such funding.” He added: “Because we have more to lose than others, we have to be more flexible than others and go the extra mile.”

The statement endorses the EU’s plans for a $10 billion “fast-start” climate fund, and says that 40 percent of that fund should be dedicated to adaptation in Africa. On Wednesday, Zenawi, European Union president Fredrik Reinfeldt and European Commission President Jose Barroso called for $100 billion in annual funding for climate action in developing countries by 2020. This money, they said in a statement, is needed “particularly in Africa, least developed countries, small island states and other developing countries with a low per-capita income.” Still, it’s not clear whether Ethiopia secured anything more solid than aspirational calls for extra money.

The major powers welcomed Ethiopia’s defection from the 1.5-degree target. British Prime Minister Gordon Brown has endorsed the side deal with France, and on Tuesday, White House officials confirmed to reporters that Obama had placed a call to Zenawi earlier in the day. The US president, they said, had “expressed his appreciation for the leadership role the Prime Minister was playing in work with African countries on climate change.” Obama has also made overtures to Prime Minister Sheikh Hasina of Bangladesh—which faces catastrophic flooding from rising sea levels—and “emphasized his desire to reach a pragmatic solution that encompasses action by all countries.”

But developing nations—which appear to have been caught somewhat off guard by the announcement—aren’t applauding. They fear that major powers are trying to pick off key players from the developing bloc via secret pacts. The fact that the agreement was made and announced in Paris—not at the official United Nations negotiations in Copenhagen—has fueled such suspicions. And the arrangement stands at odds with the positioning statement by the Africa group, a regional working coalition within the UN, submitted to the United Nations Framework on Climate Change over the weekend. That document called for emissions cuts on the order of at least 45 percent from 1990 levels by 2020 and a $400 billion climate fund from developed nations.

African nations are also protesting that Ethiopia doesn’t represent the position of the African bloc. Pakalitha Mosisili, the Prime Minister of Lesotho (an African Union member) and the chair of the Least Developed Countries grouping, fired off a statement affirming that this bloc intends to stick to the 1.5 degree target. (This goal was also reaffirmed by the Alliance of Small Island States on Wednesday.) “We respectfully remind rich countries—you have the responsibility for delivering a good climate deal, but we, the poor countries, have the right to refuse a bad deal,” Mosisili said. “Just as poor countries are suffering most from the adverse impacts of climate change, we will also suffer most from any deal in Copenhagen should it be so thoroughly compromised as to be ineffective.”

The proposal offers “some positive signs” in terms of getting some sort of agreement between the most significant blocs, said Romain Benicchio, a policy adviser at Oxfam International. But, he continued, “It would have been stronger if there had been some clearer support from the Africa group and Europe on both sides.” That the announcement was delivered from Paris, he added, was “unfortunate.” “We already have a very complicated process here,” said Benicchio. “To have something coming from the outside which is not very clearly accepted … can lead to misunderstanding.

Some developing nations fear that the stalemate at Copenhagen will impel more countries to make concessions out of a desire to get something—anything—done before the summit concludes on Friday. But for Africa, giving ground on temperature rise is a concession fraught with risk. According to the Intergovernmental Panel on Climate Change, an average global temperature rise of 2 degrees Celsius—the target industrialized nations are pushing for—would represent a rise of 3 or 4 degrees in Africa. That in turn would trigger severe drought and hunger. “This is death to millions of Africans,” said Hon Awudu Mbaya, President of Pan-African Parliamentarians Network on Climate Change. Said Mosisili of Lesotho. “At this 11th hour of negotiations, we appreciate that the issues are complex—but we will not sign a suicide pact.”