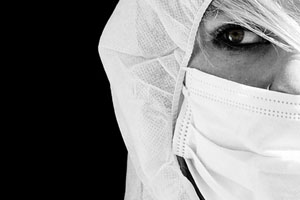 Photo used under a Creative Commons license by flickr user <a href="http://www.flickr.com/photos/4yas/">Y</a>

If you can’t find any swine flu vaccine for your kids, it won’t be for a lack of positive thinking. In fact, the whole flu snafu is being blamed on “undue optimism” on the part of both the Obama administration and Big Pharma.

Optimism is supposed to be good for our health. According to the academic “positive psychologists,” as well as legions of unlicensed life coaches and inspirational speakers, optimism wards off common illnesses, contributes to recovery from cancer, and extends longevity. To its promoters, optimism is practically a miracle vaccine, so essential that we need to start inoculating Americans with it in the public schools—in the form of “optimism training.”

But optimism turns out to be less than salubrious when it comes to public health. In July, the federal government promised to have 160 million doses of H1N1 vaccine ready for distribution by the end of October. Instead, only 28 million doses are now ready to go, and optimism is the obvious culprit. “Road to Flu Vaccine Shortfall, Paved With Undue Optimism,” was the headline of a front page article in the October 26th New York Times. In the conventional spin, the vaccine shortage is now “threatening to undermine public confidence in government.” If the federal government couldn’t get this right, the pundits are already asking, how can we trust it with health reform?

But let’s stop a minute and also ask: Who really screwed up here—the government or private pharmaceutical companies, including GlaxoSmithKline, Novartis, and three others that had agreed to manufacture and deliver the vaccine by late fall? Last spring and summer, those companies gleefully gobbled up $2 billion worth of government contracts for vaccine production, promising to have every American, or at least every American child and pregnant woman, supplied with vaccine before trick-or-treating season began.

According to Health and Human Services Secretary Kathleen Sebelius, the government was misled by these companies, which failed to report manufacturing delays as they arose. Her department, she says, was “relying on the manufacturers to give us their numbers, and as soon as we got numbers we put them out to the public. It does appear now that those numbers were overly rosy.”

If, in fact, there’s a political parable here, it’s about Big Government’s sweetly trusting reliance on Big Business to safeguard the public health: Let the private insurance companies manage health financing; let profit-making hospital chains deliver health care; let Big Pharma provide safe and affordable medications. As it happens, though, all these entities have a priority that regularly overrides the public’s health, and that is, of course, profit—which has led insurance companies to function as “death panels,” excluding those who might ever need care, and for-profit hospitals to turn away the indigent, the pregnant, and the uninsured.

As for Big Pharma, the truth is that they’re just not all that into vaccines, traditionally preferring to manufacture drugs for such plagues as erectile dysfunction, social anxiety, and restless leg syndrome. Vaccines can be tricky and less than maximally profitable to manufacture. They go out of style with every microbial mutation, and usually it’s the government, rather than cunning direct-to-consumer commercials, that determines who gets them. So it should have been no surprise that Big Pharma approached the H1N1 problem ploddingly, using a 50-year old technology involving the production of the virus in chicken eggs, a method long since abandoned by China and the European Union.

Chicken eggs are fine for omelets, but they have quickly proved to be a poor growth medium for the viral “seed” strain used to make H1N1 vaccine. There are alternative “cell culture” methods that could produce the vaccine much faster, but in complete defiance of the conventional wisdom that private enterprise is always more innovative and resourceful than government, Big Pharma did not demand that they be made available for this year’s swine flu epidemic. Just for the record, those alternative methods have been developed with government funding, which is also the source of almost all our basic knowledge of viruses.

So, thanks to the drug companies, optimism has been about as effective in warding off H1N1 as amulets or fairy dust. Both the government and Big Pharma were indeed overly optimistic about the latter’s ability to supply the vaccine, leaving those of us who are involved in the care of small children with little to rely on but hope—hope that the epidemic will fade out on its own, hope that our loved ones have the luck to survive it.

And contrary to the claims of the positive psychologists, optimism itself is neither an elixir, nor a life-saving vaccine. Recent studies show that optimism—or positive feelings—do not affect recovery from a variety of cancers, including those of the breast, lungs, neck, and throat. Furthermore, the evidence that optimism prolongs life has turned out to be shaky at best: one study of nuns frequently cited as proof positive of optimism’s healthful effects turned out, in fact, only to show that nuns who wrote more eloquently about their vows in their early twenties tended to outlive those whose written statements were clunkier.

Are we ready to abandon faith-based medicine of both the individual and public health variety? Faith in private enterprise and the market has now left us open to a swine flu epidemic; faith alone—in the form of optimism or hope—does not kill viruses or cancer cells. On the public health front, we need to socialize vaccine manufacture as well as its distribution. Then, if the supply falls short, we can always impeach the president. On the individual front, there’s always soap and water.