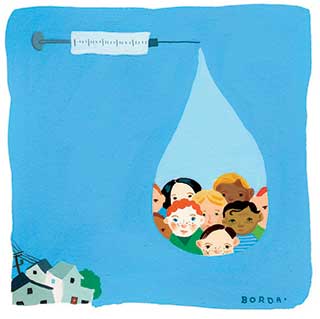 
in the last trimester of her pregnancy, Helena Moran caught a cough that she couldn’t get rid of. She figured she’d picked up the germ—whatever it was—from one of her patients at a Boulder dentist’s office. But the real nightmare began after her daughter, Evelina, was born: The baby began to cough and cough, and then she’d curl up in a little ball and turn blue. At the emergency room, she was diagnosed with whooping cough. She spent the next five weeks in intensive care and suffered permanent lung damage.

It turned out that by working in Boulder—one of the wealthiest, most well-educated towns in the country—Moran had put herself at risk of contracting a disease that largely disappeared after widespread vaccination against it began in the 1950s. Since the early 1990s, whooping cough has periodically whipped through Boulder, where a large percentage of parents do not immunize their children, public health officials say.

There’s a Boulder in almost every state. Childhood vaccination rates nationwide are near record levels, in part thanks to a Clinton-era program that guarantees free vaccines for the poor. But as I learned while researching my book, Vaccine, a history of immunization, resistance is also growing, especially among affluent and well-educated people—to the point where living in a place with a high percentage of PhDs is a risk factor for whooping cough. “These are people who know better,” ucla whooping cough expert James Cherry told me, “but they don’t know enough.”

Vaccine resisters are motivated by a range of convictions—immunization isn’t “natural” (the wellness set), it’s suspect because it’s government mandated (Christian home-schoolers), and so on—but the movement got a huge boost from the controversy over the mercury-laden preservative thimerosal, which some theorized might be linked to autism. That link has been disproven—by, if nothing else, the fact that autism rates remained steady after pediatricians and public health authorities told manufacturers to stop making thimerosal-containing childhood vaccines in 1999. But the anti-vaccine movement has kept going, finding ever new reasons to distrust immunization. Some, including celebrity pediatrician Dr. Robert W. Sears, have raised fears about aluminum in the shots, while others—like the 2,000 or so protesters at a Washington rally this June—simply charge that kids get “too many vaccines” full of “dangerous toxins” that overwhelm their immune systems.

The skeptics have many things going for them: our justifiable distrust of medical authority; our admiration for do-it-yourselfers, mavericks, and the self-taught; even a dose of celebrity appeal from the likes of Charlie Sheen, Jenny McCarthy, and Jim Carrey. What most of them don’t have is an understanding of the science. Thanks to vaccines, polio and diphtheria are now pretty well confined to the world’s medical backwaters. But tetanus lives everywhere in soil and rusty nails, and as many as 6 million Americans are exposed to whooping cough each year, according to surveys of blood antibodies. This year, measles has returned, with the worst US outbreak since 2001. Most of the patients have been unvaccinated children and adults, and nearly a quarter have been hospitalized. In Third World countries with no measles vaccination, the disease killed nearly a quarter-million children in 2006.

Current medical practice is to vaccinate babies against whooping cough beginning at two months of age. Widespread vaccination creates “herd immunity”—the disease has fewer hosts, which means there are fewer people to spread it to those at serious risk, from immunocompromised adults (think chemotherapy patients) to newborns such as Evelina Moran and Teddy Hickenlooper, the infant son of Denver mayor John Hickenlooper, who caught whooping cough from an unvaccinated older child in 2002.

Here’s where we get to the deeper, fundamentally progressive reason for vaccination: The point is to protect not merely ourselves, but the community. To not vaccinate is to threaten the immunological commons, the array of trillions of antibodies and T cells that decades of vaccination have built up in our bodies, draping a web of germ-fighting agents around our most vulnerable neighbors. To not vaccinate is to affirm an overweening individuality. It’s a form of selfishness.

Right now, in many states, all it takes to get an exemption from vaccine requirements is signing a form. Some, including a group of doctors at Johns Hopkins University, have proposed making it harder—allowing a philosophical exemption only after parents demonstrate a good-faith effort to educate themselves.

True, medical experts have failed us before; to make sure they are doing their job, we need to strongly support the public health programs whose job it is to watch out for serious adverse reactions to vaccines. But while questioning authority is healthy, facts are facts. If vaccines really were responsible for autism, it would be too much to ask parents to do the altruistic thing. But more than a dozen studies have failed to discover such a link—and not a single legitimate study has shown that one exists. I have spent many, many hours reading these studies and talking to vaccine scientists. I find no reason to believe Jim Carrey more than I believe them. Call me a dupe of the establishment, but I’d rather trust the doctors.