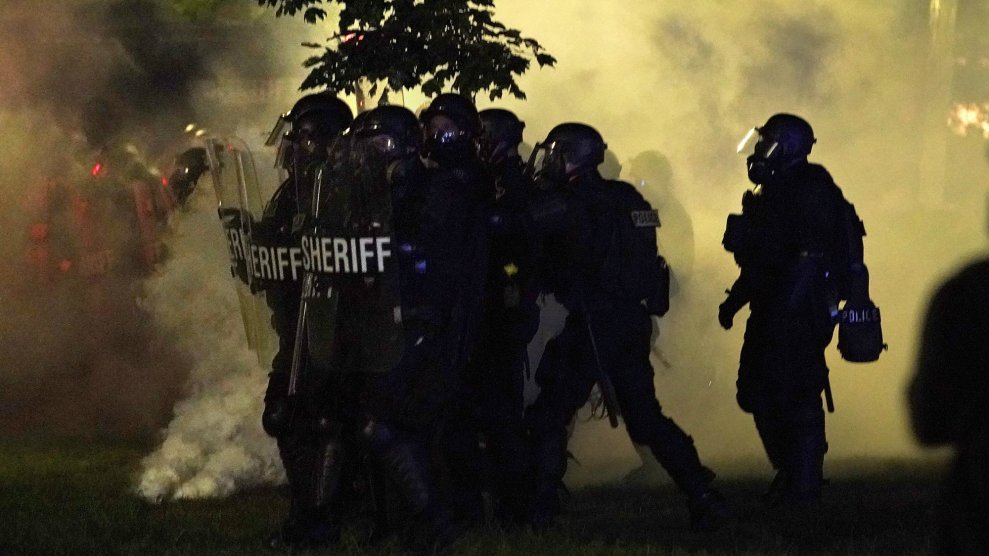 On Sunday, August 23, Kenosha, Wisconsin, police officers shot Jacob Blake several times in the back as he was climbing into his car where his three sons waited for him. According to news reports, the 29-year-old Black man had been trying to break up a fight between two women before the cops shot him. Blake survived but, as of Wednesday, he is partially paralyzed.

In response to the violence wrought by law enforcement, that night protesters took to the streets in Kenosha and protests continued over the next few days. Police officers fired tear gas and rubber bullets and protesters shot off fireworks and set fire to police cars and other property. Then on Tuesday, a group of white armed vigilantes shot three protesters, killing two. It should go without saying that their actions were illegal. Sadly, it probably also goes without saying that they were met with less police violence than Blake faced for turning his back on some officers.

Since racial justice protests erupted in the wake of the killing of George Floyd in Minneapolis in May, the Trump administration, its allies and supporters have tempted to quash the sometimes-peaceful-sometimes-not protests by the repeated demands for what they refer to as “law and order.” (Or, for Trump, “LAW and ORDER!”)

…TODAY, I will be sending federal law enforcement and the National Guard to Kenosha, WI to restore LAW and ORDER!

When anti-racist protesters demand equality and justice, Trump justifies the use of overwhelming police and paramilitary force as necessary to reinstate “law and order” to shut them down. And yet, when white so-called militia members inflict violence on the protesters—or even act on their own in response to a perceived grievance—suddenly “law and order” no longer applies. For instance, when mostly white people defied coronavirus restrictions and gathered in crowds in public to protests those very restrictions, Trump supported their efforts.

After a video of Blake being shot in the back seven times by a yet-to-be-identified police officer went viral, the usual drumbeat began. If Blake had only followed orders and immediately complied with police demands, then he wouldn’t have been shot in front of his children. The organizing principle seems to be that there are laws and a social order to adhere to, and if you dare violate either by defying a police officer’s orders or some other social rule, you may have to pay with your life. That is, if you’re a person of color. For armed and aggrieved white men and occasionally women, apparently, a different set of rules apply.

If Blake’s attempt to intervene in a neighborhood conflict took the police by surprise, they should have been well-prepared for the appearance of armed vigilantes who had been in Kenosha all day on Tuesday. One man showed up after a call was put out on Facebook to “protect” the city. “Three thousand of us are armed and ready,” another man told the Washington Post. Some came from different states and cities (outside agitators, if you will). Police were aware that armed civilians, who were self-appointed law enforcement representatives, had come to town and were hanging around with their assault weapons until 11:45 p.m. when they shot and killed two protesters and injured a third. The police have identified at least one perpetrator as 17-year-old Kyle Rittenhouse, who was from 20 miles away in Illinois. He was not arrested until the next day, after he managed to make it back home.

He will be charged with 1st Degree intentional homicide.

What version of a commitment to “law and order” allows for Blake to be shot in the back by police for the crime of walking away from law enforcement officials but reacts this slowly to armed vigilantes organizing to use protesters to realize their race-war fantasies?

Even after Rittenhouse was arrested and charged with homicide, conservatives, like Sen. Josh Hawley (R-Mo.) were still harping on property damage and partisan politics as they referred to the shooting of an unarmed man.

Waiting for @JoeBiden and the Democrats to fully and unequivocally condemn the rioting and murder in Kenosha. More and more the Marxist “social revolution” Left appears to be in control of the Democratic Party https://t.co/iKXchAX7bU

At a press conference in Kenosha, the police implied that protesters were at fault for violating curfew.

Kenosha Police Chief Miskinis responds to the murder of two protestors by saying it wouldn't have happened if people weren't out after curfew: "I'm not gonna make a great deal of it, BUT …" pic.twitter.com/GBRo8I5Zka

Kenosha is hardly an exception. Shots may not have been fired in the Michigan statehouse earlier this spring when armed “lockdown protesters” gathered to decry coronavirus restrictions but the threat of violence was unmistakable. Trump’s response?

Then, earlier this week, an unmasked crowd shattered the glass of a government office building to get into a state legislative hearing on public health restrictions in Boise, Idaho. Because of the coronavirus, the public hearing had limited seating. Some members of the crowd were armed with guns. They shoved past state troopers to get into the hearing and later defaced social distancing signs. A Democratic lawmaker who didn’t want to put her health in jeopardy by participating in a crowded hearing said the crowd was hostile to her.

Unfortunately, I had to excuse myself from Committee due to lack of social Distancing and the large crowd that filled the Lincoln auditorium. The crowd was hostile to me but I tried to remind them of the need for civility. Didn’t matter. This is what we have come to.

Afterwards, Idaho State Police made no arrests. Why? The next day, Lynn Hightower, a state police spokesperson explained the state troopers were unable to make any arrests “on the on the spot without elevating the potential for violence.”

Because the Idaho protesters were the right kind—white and conservative—the police exercised restraint in the face of violence because it was not worth the risk to protesters’ safety. Where would Blake be right now if Kenosha officers also believed risking his life wasn’t worth it?

That question is unlikely to ever be raised, given that the guy with the biggest megaphone yelling about “LAW and ORDER” is President Donald Trump, who has defined his administration and his re-election campaign on his own wild and inaccurate assessments of what constitutes “LAW” and “ORDER”—alone and together.  He starts at the top, trafficking in bogus falsehoods that leading Democrats—Barack Obama, Joe Biden, and Hillary Clinton—are criminals who take every opportunity to break the law. He’s responded to racial justice protests by gassing demonstrators in front of the White House and sending federal troops into American cities. He’s cheered on “lockdown protesters” who defy public health orders. Meanwhile, his entire administration has been one ethical violation after another. Many of his closest advisers—Stephen Bannon, Paul Manafort, Roger Stone, and Michael Cohen, just to name a few—have been either charged or  convicted of crimes. And while Kenosha was reckoning with yet another vile police shooting, team Trump has been repeatedly violating federal ethics law live on television as they stage the Republican National Convention this week.

Throughout history, we have seen how what is “law and order” for the dominant culture doesn’t apply to everyone. But as this era of pervasive corruption, state-sanctioned violence, and a pandemic that’s killed nearly 180,000 people makes abundantly clear, the harshest punishments for violating “law and order” are only doled out to certain people in certain places. When Trump and other right-wingers say they want “law and order,” they’re really sending a signal—less a dogwhistle than a bullhorn—to the other people guided by white supremacy: Break any law you want to maintain the current order.