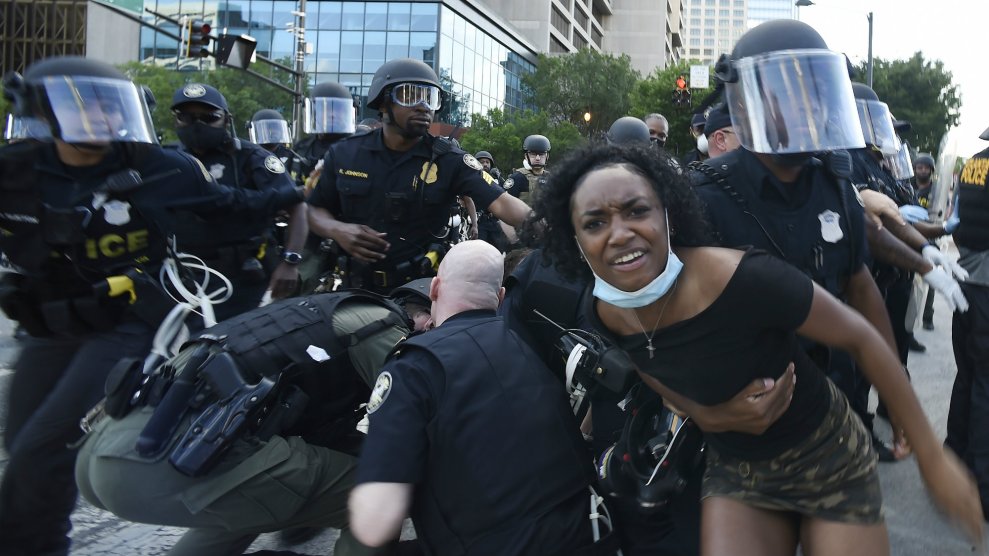 For the fifth night in a row, demonstrators across the country took to the streets to protest the death of George Floyd, a 46-year-old Black man in Minneapolis who was killed by a white police officer who kneeled on his neck while Floyd begged for his life saying, “I can’t breathe.” The officer, Derek Chauvin, was arrested and charged with third-degree murder and manslaughter on Friday. As the protests spread, demonstrators demanded an end to the unjust system and the systemic police brutality that led to Floyd’s death. The police responded with more brutality against protesters, bystanders, and journalists.

In shocking but countless viral videos, police officers in cities around the country responded to protesters with egregious tactics, from unprovoked violent shoving to indiscriminate pepper spraying.

In New York City, a police officer pulls down a young protester’s mask as his hands are in the air and pepper sprays him in the face.

I am heartbroken and disgusted to see one of my family members a young black man w/his hands up peacefully protesting and an NYPD officer pulls down his mask and pepper sprays him. @NYCSpeakerCoJo @BPEricAdams @FarahNLouis @JumaaneWilliams @NewYorkStateAG @NYPDShea cc: @EOsyd pic.twitter.com/tGK5XWS0bt

On live television, cops in Atlanta use a Taser on car passengers, remove them from the car, and arrest them.

Here is the video. On LIVE TV the APD just broke car windows, slashed tires, tazed both passengers and arrested both passengers for NOTHING. RIPPED THEM OUT OF THER CAR. #AtlantaRiots #ATLFORUS #BlackLivesMatter pic.twitter.com/9XFDEdq7qr

Again in New York City, police officers plow through protesters with their vehicles.

In this video, a white police officer decides to shove a Black woman to the ground with his bike.

WATCH: I was recording when the first clash between police & protestors broke out in Atlanta. @cbs46 #cbs46 #news #GeorgeFloydprotest pic.twitter.com/hrDBk1Plry

In Minneapolis, the National Guard and the city police department fire paint canisters at people standing on their porches.

In Seattle, police maced a child.

Then refused to give his badge number. pic.twitter.com/4ZEOblXWnj

In Salt Lake City, Utah, police officers dressed in riot gear knock down an elderly man who is walking down the street.

WATCH: @slcpd (Salt Lake City cops) shove down an elderly man with a cane for NO DAMN REASON.

This is a non-exhaustive list. But, despite the ample footage of police violence that took place over the weekend, a few elected officials thanked the police for showing “restraint.”

Nevertheless, the past few days have revealed to the public what American policing actually looks like. But remember this is what happened when the cameras were rolling. What happens when they’re not?